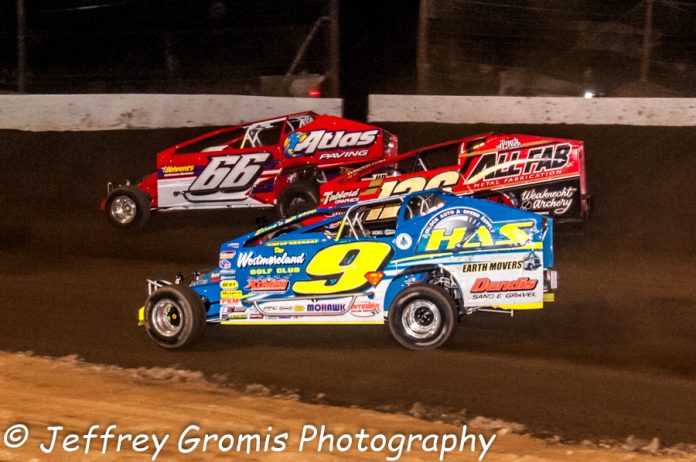 BECHTELSVILLE, PA –  Ma Nature smiled on Saturday night producing a beautiful for the second annual VP Racing Fuels Bruce Rogers Memorial Money Maker at Grandview Speedway saw a combination of over 80 Modifieds and Sportsman cars fill the pits to participate in front of a large fan turnout. The race, named in honor of the man that built the 1/3-mile clay oval along with his father Forrest, continues under the leadership of the Rogers family.

New York invader Matt “Superman” Sheppard inherited the lead in the 50-lap small block/big block Modified event when Brian Hirthler, doing double duty, came to a halt in turn four for the yellow with 16 laps in the books. Sheppard held off the challenges at various times from Duane Howard, Stewart Friesen and Jeff Strunk to collect the $7,500 top prize money.

In Sportsman action Kevin Hirthler, also competing in both classes, took the lead away from Craig Whitmoyer on the 13th lap restart and went on to claim the victory in the 25-lap race for the second straight year.

Howard overtook second on the 13th lap to pressure Hirthler for the top spot with the top five positions completed by Johnson, Sheppard and Strunk.

Hirthler’s run ended when mechanical issues forced him to stop in turn four and that quick Sheppard took advantage of the situation and went from fourth to first as the yellow unfurled on the 16th lap. On the restart Sheppard held his own with Howard, Friesen, Strunk and Ray Swinehart in pursuit.

Johnson was eliminated from the hunt when a flat tire sidelined him as the yellow came out on lap 18. It was still Shepard in the lead when action resumed.

Howard and Friesen had a battle of their own brewing for second and that position was swapped on the 27th lap, but five laps later the roles were reversed.

Howard’s victory lane visions were erased when a flat left rear tire brought out the yellow and put him out of contention. When action went green again Sheppard was still in command with second through fifth now comprised of Strunk, Rick Laubach, Jared Umbenhauer and K. Hirthler.

Sheppard distanced himself from the pack in the later stages and despite having to deal with lapped traffic that didn’t deter him and he went on to park it in the winner’s circle. Following him across the line were Strunk, Laubach, Jared Umbenhauer and Hirthler. Rounding out the top ten were Friesen, Craig Von Dohren, Reimert, Brett Kressley and Kyle Weiss.

Through the luck of the draw, Meme DeSantis, Richie Pratt Jr., Ron Myers and Richie Hitzler each collected $250 from American Racer, the tire supplier, as part of the non-qualifiers portion.

Umbenhauer, R. Swinehart, Strunk and B. Hirthler were the heat winners. Consies were won by Billy Pauch Sr. and Laubach.

After two attempts to get a lap completed in the Sportsman feature Whitmoyer grabbed the early lead and followed by Brad Brightbill, K. Hirthler, Mike Koffel and Ryan Smith.

Scott Kohler spun on the 13th lap for a yellow and on this restart Hirthler and Reimert swapped paint and K. Hirthler emerged as the new leader.

Hirthler never relinquished the lead and went on to claim the win by a healthy margin over Whitmoyer, Brightbill, B. Hirthler and Mark Kemmerer. Sixth through tenth were Kreis, Brad Grim, Dean Bachman and Josh Adams.

Racing returns to Grandview Speedway on Saturday, April 13 when the chase for the NASCAR and track titles kicks off for the T.P. Trailers 358 Modifieds and T.P. Truck Equipment Sportsman. Racing starts at 7 p.m. Adult admission is $15 while youngsters under 12 are admitted free. Then on Saturday, April 20th the Blast from the Past Vintage racers will make it a tripleheader racing program with no increase in admission prices.

Information on Grandview Speedway can be found at www.grandviewspeedway.com, Facebook or telephone 610.754.7688.