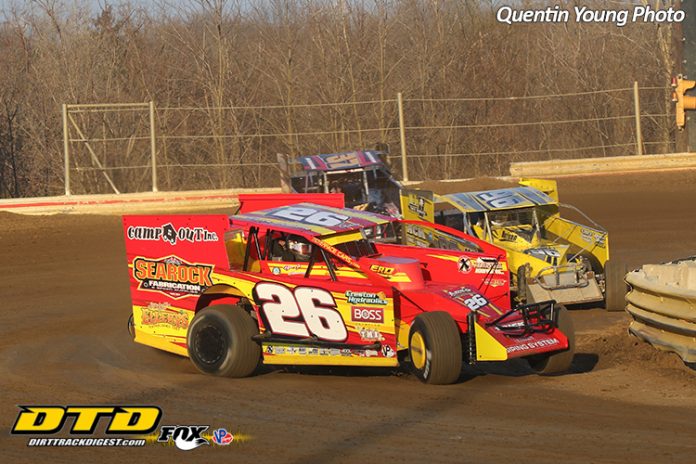 Polesitter Danny Bouc bolted to the front of the pack as the 40-lap Vahlco Modified feature got underway. On the second circuit, Billy Pauch Jr. moved past Brian Papiez to take over the runner-up spot. The top three of Bouc, Pauch Jr. and Papiez remained intact until the first yellow flag waved on lap four. When action resumed, Pauch Jr. swept past Bouc to grab the lead. Following a trio of caution periods, Pauch Jr. was still in front with thirteenth place starting Ryan Godown in second, Bouc in third, and John McClelland in fourth with seven revolutions completed. During this stretch of green flag racing, Pauch Jr. built up a five car length advantage over Godown with fifteen laps registered. Over the next few laps and with the top two in traffic, Godown quickly closed in on Pauch Jr. By lap twenty-five, Pauch Jr. and Godown were in a side-by-side tussle for the top spot.  On the next circuit, Godown wrestled first place away from Pauch Jr. Now heading his rivals and with ten laps remaining, Godown was knifing his way past slower competitors as Pauch Jr. was fighting back to regain the lead. On lap thirty-three, Godown and Pauch Jr. were door-to-door again with Godown using the outer groove. Two tours later, Godown managed to retain his lead following a tangle with a slower running competitor in traffic. As the two-to-go sign was given, Godown still had Pauch Jr. in his tracks. On the final turn of the last lap, Godown fended off another determined challenge by Pauch Jr. to narrowly win his forty-seventh Modified feature. With Pauch Jr. taking second, Bouc’s strong run resulted in third place. McClelland was fourth. Eleventh place starter Brandon Grosso rounded out the top five. Pauch Jr., Bouc and Mike Butler were victorious in the Vahlco Modified heat races.

Ryan Simmons passed Johnny Bangs with four laps left to win the 20-lap Crate Modified feature. Polesitter Eric Palmer paced the field for the first thirteen tours until an incident between himself and second place running Ryan Heim sent Palmer into a spin. Following this caution period, Bangs became the new leader and led the pack until Simmons took command. The victory was the second for Simmons in the Crate Modified division. Twelfth place starting Joe Toth came home in second. Jeremy Martino’s late rush rewarded him with a third place finish. Bangs took fourth with Steve Hicks next in line. The Crate Modifieds qualifying events were taken by Palmer and Kevin Borden.


In the 25-lap Larry’s Hot Rods & Harley’s Northeast Wingless Sprint Car main event, Jermain Godshall used the outside groove on the final tour to visit victory lane for the third time in his career. For the opening nine laps, Stan Ploski headed his rivals before Godshall took over. Rich Mellor gained the top spot from Godshall on the twelfth tour. Once in front, Mellor began to pull away and had his sizeable margin wiped out by a caution period on lap twenty-three. On the last revolution of the race, Mellor lost control of his car in the final corner and Godshall took advantage of the miscue to claim the win. Mellor was able to hold on for second and Ploski was third. Heidi Hedin and Duane Nixon filled out the top five. Ploski and Brad Schalle won the heat races.

On the final circuit of the 15-lap 4-Cylinder race, TJ Graves squeezed by Jimmy Avery in traffic to score the victory. After starting fourteenth, Mike Fox finished in the runner-up spot. With Avery holding on for third, Joe Garey Jr. was fourth and Justin Dunn completed the race in fifth.

In the 8-lap Lyons Construction/Metal Fab Rookie Sportsman race, Ryan Godown Jr. took the lead from Ryan Krushinski on the third circuit and paced the field the rest of the way to take the win. After starting last in the field of eight, Anthony Tramontana came home in second. Third place went to DJ Hunt with Vinny Troia taking fourth. Krushinski, who led the opening two tours, held on to finish in fifth.

On Saturday, April 13, the Delaware Auto Exchange Mid-Atlantic Sprint Series starts their 2019 season with a visit to New Egypt Speedway. The Vahlco Wheels Modifieds, Hammer Sportsman, Street Stocks and the Lyons Construction/Metal Fab Rookie Sportsman round out the card. Pit gates unlock at 1:00 p.m. with the grandstand ticket windows opening at 4:00 p.m. Hot laps crank up at 5:00 p.m. and racing starts at 6:00 p.m. Admission to the grandstand is $20 for adults, $18 for seniors 65 and older, $10 for teens 12-15, $10 for military personal and their spouses with ID, and Kids 11 & under are FREE. Pit admission is $30 with a New Egypt Speedway license and $40 without.