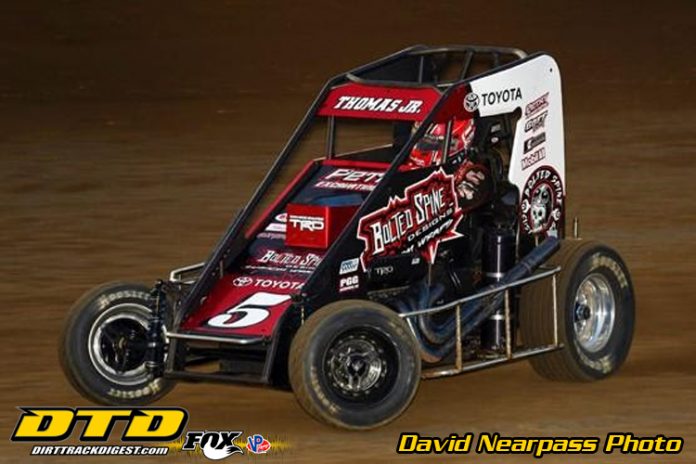 KOKOMO, IN – After an incident on the final lap of the Kokomo Speedway Sprint Car race that preceded Saturday night’s USAC NOS Energy Drink National Midget feature, perhaps it was fate that we would see Kevin Thomas, Jr. and Justin Grant meet again in some form or fashion on the second night of the “Kokomo Grand Prix.”

Justin Grant got the best of Thomas in the sprint tilt, picking up the victory following a last-lap, side-by-side battle that wound up with Thomas on his head before making a beeline to the opposite end of the track to confront Grant.

When cooler heads prevailed, as luck would have it, a look at the starting lineup showed the two starting side-by-side in the second row of the midget main, setting the stage for round two of the duel which would once again come down to the final lap, but this time with the outcome the mirror opposite.

Thomas ran down Grant late in the going and, on the final corner of the final lap, reversed his fortunes with redemption, nipping Grant by half a front wheel at the stripe – or 0.015 seconds to be precise – to collect the fifth victory of his USAC National Midget career.


During the downtime for his early sprint car exit, the fire was burning inside KTJ, but instead of dwelling too much, he and his Petry Motorsports crew used the few extra minutes to reclaim focus on the next task at hand.

“I know people are going to want to pick at me and Grant because we crashed each other or whatever the case is,” Thomas continued. “It’s racing. We both race hard. It is what it is. We talked to each other in the podium picture and it’s all good. It’s just the way it goes. He’s been my friend for a long time. He didn’t crash me on purpose, but I’d get mad at my grandma if she crashed me. It’s nothing against him; it’s just my nature.”

Thomas’ desire and motivation for redemption was evident from the word ‘go’ as he charged from his fourth starting spot to slide to the point momentarily in the third turn on lap one, but the move wouldn’t stick as Jason McDougal crossed over to reclaim the lead while Thomas fell back into line in fourth.

McDougal, the runner-up from the night before, would lay claim to the lead for the first seven circuits. Yet, on the lap eight restart, the door was open for Grant to slide past McDougal for the lead in the first turn. Grant was seeking a little redemption of his own following a heat race flip during Friday night’s action.

Just prior to halfway, Friday winner Tyler Courtney began to make his surge, getting around teammate Chris Windom for the third position on lap 12. Three laps later, the series point leader found himself upside down in turn one. Incredibly, he was able to charge back to ninth at the checkered following repairs from the Clauson/Marshall Racing crew.

Restarts would play a starring role in the second half of the 30-lapper with a multitude of spins and stoppages taking place, the most serious of which came on the 21st lap when series Rookie Ethan Mitchell flipped wildly after tagging the turn one concrete. He walked away unscathed.

On the lap 21 restart, a scramble for position saw Windom attempt to slide McDougal for second, but it was one step forward, two steps back, as he fell back to fourth behind Thomas who took advantage of the opening to crack into third. With two to go, Thomas ripped by McDougal for second and the pursuit was set in motion toward Grant. Thomas blazed a trail to pull to the inside of Grant into turn one just moments after taking the white flag.

However, the pursuit had to wait as Cole Bodine’s ride stopped in turn two, setting up a green-white-checkered finish.

Leading up to the final showdown, Thomas had been playing around with his shocks from the cockpit and altered his line until he found something that worked. Everything was clicking for the Cullman, Ala. native, and he had his eyes and ears open to any advantage he could find, even if it came from the other side of the fence.

“Once we got to second, I saw Grant’s guys giving him the motion to go to the top in three and four,” Thomas recalled. “I knew that it was going to be such a long way around that it would open up a slider. I knew where he was going to go because his guys told him to go there. He ran a good line around there and he was fast up there. It’s just such a shorter point to drive straight across the track.”

On the final restart, Thomas took a line lower than Grant into turns one and two on the 29th lap before following him up top between turns three and four as a surging Zeb Wise joined the fray, going high on entry before diamonding off below Thomas. Thomas held serve in second and remained within three car lengths of Grant in one and two on the final go-around.

Entering turn three for the final time, Grant remained topside as Thomas drove it in deeper than he had on any other lap, sliding right across the nose of Grant in turn four. Grant countered underneath in a race to the line, coming up inches short of Thomas and his Petry Motorsports/Bolted Spine Designs – Petry Excavating – Gray Auto/Bullet/Speedway Toyota. Grant took second ahead of Wise, McDougal and C.J. Leary.

Thomas rejoined Petry at the beginning of the 2019 season following a brief stint driving for the Greenfield, Ind. based team at the conclusion of 2017 and the beginning of 2018, rewarding the team with its first ever USAC National Midget victory.

“Getting a win for those guys is a big momentum builder,” Thomas exclaimed. “Scott Petry has never seen his car win before (with USAC). That was pretty cool. I really enjoyed doing that for them. They bust their butts and I’m just glad it paid off. They’ve been wanting to win a USAC feature for so long and they’ve been close. They’ve just never really got there. But once you get that monkey off your back, they start coming easier.”