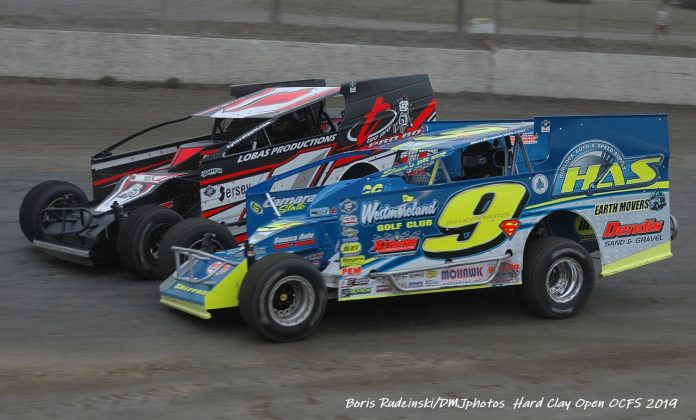 MIDDLETOWN, NY – Matt Sheppard has a long resume of victories in his dirt Modified career.

Orange County Fair Speedway, however, had eluded him.

Until Sunday, that is. ‘Super Matt’ collected his first-ever victory at the Legendary House of Power in the Escape RV Inc. ‘Hard Clay Open’ to launch Race No. 1 of the Bob Hilbert Sportswear Short Track Super Series (STSS) Fueled By Sunoco Halmar International North Region.

The win for Sheppard came from 12th starting position aboard the Hurlock Auto & Speed No. 9s.

“There were no excuses tonight,” a smiling Sheppard said after climbing to the roof of his Bicknell race car. “We started 12th and had to drive our way to the front.”

A field of 60 STSS Modifieds rolled through the gates in hopes of kicking off the 100th anniversary of OCFS in Victory Lane. The car count was the highest in the six-year history of the ‘Hard Clay Open’ springtime event. A large crowd took in the action from both sides of the five-eighths-mile oval.

Invader Danny Varin and defending OCFS champion Anthony Perrego led the field to the drop of the green flag for the 50-lap affair. Varin grabbed the initial lead in the Magsarus No. 93, with Perrego wasting little time in his drive to the front. He rolled the outside lane to the lead on lap three.

Following a yellow on lap seven, two cars stood out from the rest. Matt Sheppard had made his way from his 12th starting spot to sixth in the first seven laps. Not too far behind was Stewart Friesen who was up to 11th from his 20th starting position.

When the race resumed, Sheppard and Friesen continued their assault on the field. After Varin took the lead back from Perrego on the restart, a three-car battle ensued after Sheppard climbed into the third spot. After three laps of intense, door-to-door racing, Sheppard emerged from the fray with the lead on lap 16 and went to work on lapped traffic.

Friesen’s Halmar International No. 44 had clawed his way into the top-five and caught the battle up front. He along with, Perrego, Varin, Brett Hearn, and Mat Williamson fought for the runner-up spot until a yellow came out on lap 31.

Sheppard motored away on the restart, leaving the chasers battling each other. Williamson began to show signs of an ill-handling racecar, sliding back to fifth before cutting the right-rear tire on the Jeff Behrent-owned No. 3 prior to the final yellow on lap 48.

Friesen’s climb from the 10th row ended with a runner-up finish as Savannah, N.Y.’s Sheppard broke his long winless drought at Orange County.

Friesen, of Sprakers, N.Y., earned $5,000 as the race’s runner-up plus $400 from Rock Fantasy Concert Shop in Middletown, N.Y., as the race’s Hard Charger for his 18-position ascent.

“I’ve always been intimidated by this place,” Hilfiger said. “But I took a different approach tonight.”

The Crate 602 Sportsman event was a non-points program run under OCFS weekly rules.

HARD CLAY HAPPENINGS: Despite a huge turnout of 106 total race cars, series and track officials completed pre-race and safety inspections quickly and the event rolled off on time….

The outstanding night for Danny Varin ended two laps from the finish when he was clipped and spun in turn four. The Fonda, N.Y., driver went off on the business end of the wrecker….

Andy Bachetti caught the inside wall in the Precision Hydraulic & Oil Cash Dash, requiring his race team to scramble to make repairs in time for the main event….

Stewart Friesen was a consolation qualifier after spinning while challenging for the lead in his heat race….

Pennsylvania driver Mike Gular continued his affinity for Orange County, driving from 16th to finish fifth in the 50-lap feature….

The WELD Racing Wheels Hard Luck Award went to J.R. Hurlburt who was eliminated in a heat-race tangle before reaching the starter’s stand….

Next up for the STSS: Delaware International Speedway in Delmar, Del., presents the ‘Diamond State 50’ for the Velocita-USA South Region paying $5,000 to win for 50-laps plus STSS Crate 602 Sportsman, Delaware Super Trucks and Southern Delaware Vintage Stock Cars.