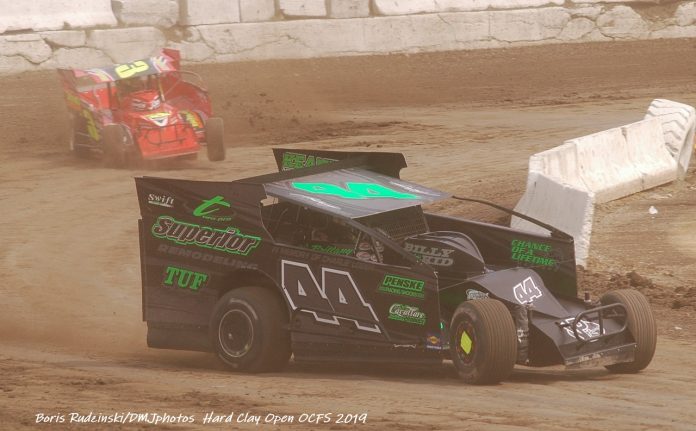 Last season at the Orange County Speedway, Anthony Perrgo was the big-block modified champion and on most nights was easily the fastest car on the track so naturally when you are the reigning track champion you want to start out the new season with a win to show everyone that last season was no fluke and that you are definitely the team to beat once again. Although Perrego did not win the race he can take solace in knowing that he was the first OCFS car across the finish line with a solid third place finish to start the Short Track Super Series North region.

Perrego was disappointed, but knew it was a good start to the season in his first race of the year in the Brian Smith owned, Superior Remodeling No. 44.

“The track was tough and dusty due to the daytime conditions and I think we were a little underpowered today,” expressed Perrego. “I think Matt (Sheppard) had a big-block in and Stewie (Stewart Friesen) had a big open small-block. The motor we had in the car today works good at places like Accord and tracks like that, but it wasn’t we needed today. Today we got beat by two of the best in the business so that’s nothing to be ashamed of.”

Perrego started on the outside pole and worked his way past early leader Danny Varin on lap four and was starting to put some distance on Varin when the caution was displayed on lap seven. On the restart Varin was able to get back by Perrego to re-assume the lead and Perrego was never able to find his way back to the top spot.


“I think it was a little bit of motor, Danny (Varin) had a big-block in his car I think and was just able to take off a little better than I was,” said a disappointed Perrego. “The first time I got a little bit of jump on him but the next time he was ready for me and just had too much power. All in all, it was a good day. I think our motor combination was a little off. When we come back here the next time, we’ll have something a little different for them.”

Hearn Getting Ahold of the American Racer Tires

Brett Hearn has made no bones about it that he is not comfortable racing on the American Racer tires that are mandated on the Short Track Super Series. Hearn who is accustomed to racing on the Hoosier tire brand just has not been able to get a feel for the American Racers. However, that uncomfortableness is starting to go away after Hearn finished fourth in yesterday’s Hard Clay Open to back up his top five two weeks ago at Port Royal Speedway.

“Hey, getting a couple top fives to start out the series on this Deyo deal is not too bad,” mentioned Hearn as he stood by his No. 20 in the pits afterwards. “These tires are not our deal and we don’t have the smoke under our hood that those guys up front have so all-in-all we are pretty happy with what we got. We have a little motor in this car today, and we had a good day with it.”

With a couple of good runs so far this season on the Short Track Super series I asked Hearn if he any plans to possibly run any other future races on the STSS.

“I don’t have any on my schedule right now but who knows,” explained Hearn. “Our concentration as a team is getting it done here at Middletown, Malta (Albany-Saratoga) and on the Super DIRTcar Series and then we’ll see how it plays out.”

You can notice the excitement in Hearn’s voice as he talked about returning to the track where it all started for him and the home for many of his biggest victories.

“It’s going to be really good to be back,” said Hearn as he talked about coming back home. “I think we reinforced ourselves today as far as feeling we got a handle on it coming back here with our set-ups and stuff like that and our cars feel comfortable here. I think we can have a really good year here”

Mike Gular shocked the racing world last year at the Hard Clay Finale when he drove his Terry Fanascht No. 2 to victory over a field of 70 cars including the biggest names in the business. Gular showed yesterday it was not a fluke as he battled hard all day and at the end of fifty laps finished the Hard Clay Open in the fifth spot.

“We had another good run here, we had a little bit of luck getting through but yeah it was good,” explained Gular. “It was tough with it being a daytime show.  The track was rough and had a couple of ruts in it, but it was the first race of the year plus being in the daytime. I wouldn’t worry, they’ll get it straightened out. It might’ve been better this way because if it was dry and slick, there might not have been any passing at all.”

Gular and his team have a had a rough start to their 2019 season. In fact, the night before Gular was a DNQ at the track he won the championship at last season, the Grandview Speedway so the team was looking for a good run to get their season pointed in the right direction and gain some confidence.

“We definitely needed this, that’s for sure, because we haven’t done anything else so far this year.” stated an elated Gular. “Last night at Grandview was just terrible.  We missed qualifying by one spot so to come here today and get a top five against all the competition that was here is big for the team.”

With the money being offered at Orange County Fair Speedway this season, Gular is looking forward to making some return trips in the future to get some practice running on Hoosier tires in preparation for the big $100,000 to win race in August.

“We are going to try and get back here some once we get settled into the season and get some time in on using the Hoosier tires,” mentioned Gular. “If we have a night that Grandview rains out and they are still running here we will head up here to race.”

Pauch Jr’s bad luck at Orange County continued as they Frenchtown, N.J., driver was involved in a lap seven restart accident when Brett Hearn bounced off the inside barrier and did a full spin causing the cars behind him to jam on the breaks with Pauch ending up against the fence and having to be towed into the pits…

Stewart Friesen was awarded the hard charger of the race award. Friesen was forced to run the consolation when after starting from the seventh spot in his heat race.  He spun while going for the lead. Having to start at the tail after is spin, Friesen was only able to work his way back up to fourth which was one spot short of qualifying…

Danny Creeden was penalized for spinning out Danny Varin late in the race while running in the top ten. Creeden told me after the race it was a broken rear axle that caused Varin to slow and forcing Creeden to bump him…

Nascar K & N driver and former dirt racer Tyler Dipple was making his first start of the year in his dirt modified of the 2019 season. Dippel qualified through the consolation race was credited with a 22nd place finish in the feature event…

Mat Williamson, driving the Jeff Behrent No. 3, ran in the top five all race long until a flat tire forced him to pit in the latter stages of the race. Williamson returned to finish in the 14th spot…