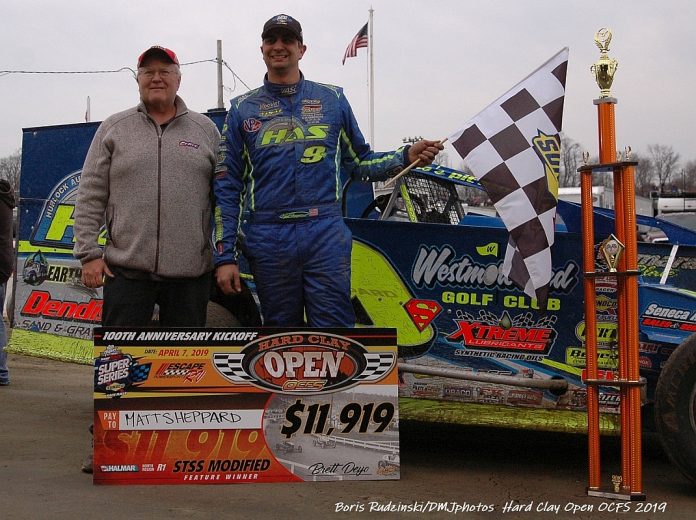 Two races, two very different facilities, but the same results at both for Matt Sheppard.

Sheppard’s weekend started with a win on Saturday in the Bruce Rogers Memorial Money Maker worth $7,500 at Grandview Speedway. He backed that up on Sunday by winning over $12,000 in claiming his first ever triumph at the Orange County Speedway in the Hard Clay Open Short Track Super Series North Region Opener.

When it was all over, Sheppard and company headed back to Waterloo, N.Y., with over $20,000 in prize money. He’s off to a hot start with two wins this weekend joining a pair of runner-up finishes with the Short Track Super Series South Region. With right around 10 events run, Sheppard has been in the top two in half of them.

“This is a good weekend,” stated Sheppard with a smile after Sunday’s win. “It’s nice to have in the beginning of the year. Financially this is the worst time of the year for me. I just spent a lot to get going for the season and you really don’t have much coming in this time of year. This helps. This will pay for a little bit of stuff and put a dent in what we’ve spent the last month or two. It was a nice weekend.” Neither of the wins came easy for Sheppard. The Grandview 50-lap feature got underway with Sheppard redrawing the outside of the fourth row. He had to work his way forward on a track that featured a dominant groove on the cushion. Sheppard used that when he could, but was also good on the bottom when he had to be.

The most important move of the race came on a lap 16 restart. Sheppard was in the outside groove for the green running fourth. With a little help he ended up as the race leader when he came back around to the start-finish line.

“I think we finally restarted on the top and got by the guy on the bottom,” mentioned Sheppard of the restart. “I had a run on Duane (Howard). He tried to throw a slider and I was able to see it in time to get turned off (the cushion). I got under him going down the backstretch. I went down into three and caught the bottom really nice and then I think Brian (Hirthler) broke. It was fourth to first. That was big.”

He continued to set the pace the rest of the way en route to the opening night win at Grandview. He rode the top as he fended off off all comers including a challenge from Jeff Strunk.

“That top got really good and whoever had a good car, and there were a lot of good guys with good cars, whoever got there first was going to be tough to beat,” commented Sheppard. “The race up through the pack was probably just as important. After I got the lead I stayed smooth and kept the nose on it the rest of the race. It’s nice when you are leading you get clear vision of it (cushion) and see every ripple, and every clump. That definitely makes it easier.”

Grandview was traditionally a track that did no favors for Sheppard earlier in his career, but as of late it’s been pretty good to him.

“There was about a dozen years of complete crapiness here and then all of sudden one day we were pretty good here,” joked Sheppard. “I really don’t know what happened. It’s becoming one of my favorites.” So from the one-third mile Grandview layout Sheppard made the trek north to the five-eighths mile Orange County Fair Speedway for the Hard Clay Open. Sheppard had never won at the track prior to Sunday’s triumph. He’s been close, but never had everything go his way. That was until it all did on Sunday.

Saturday Sheppard marched from eighth to win while he had a greater challenge in the 50-lap Hard Clay Open after he redrew the 12th starting position. He was good from the get-go. He moved toward the front using the bottom of the racetrack on the tricky day-time surface.

“The track conditions were different than typical Middletown, there is no doubt about that,” cited Sheppard. “We found a good groove there. I found the bottom of off of two and I could scoot right up off there. It was different. The track was challenging, but at the same time it was probably the easiest it’s been to pass here.”

There seemed to be something about restarting in fourth for Sheppard over the weekend.  Just like Saturday at Grandview, he restarted on the outside of the second row in his Bicknell with 13 laps to go. He made the moves he had to make and a lap later his No. 9s was at the front of the field.

“I was surprised two restarts in a row I was able to drive around the top and get a bunch of guys and that was big too,” commented Sheppard. “Getting by them two or three cars on the restarts that was really big as well.”

He had one final challenge late in the race in the form or perennial challenger Stewart Friesen. Friesen started back in 20th before battling his way through the field to second. With two laps to go Danny Varin spun off of the fourth corner setting up a shootout to the finish. Friesen was there, but Sheppard was too good. He wasn’t going to be beat.

“It’s definitely not who you want to see,” said Sheppard. “I didn’t want to see that caution with two to go. I felt pretty comfortable there. I was in a good rhythm. When the track is like this is takes one little push, one little this, that or the other thing and a really great race can be lost just like that.”

None of that happened as Sheppard bobbled on the restart a bit before hitting a perfect two laps to finally add the Orange County Fair Speedway to his resume.

The Finish Line Chaplain: How We Forget – DTD Exclusive