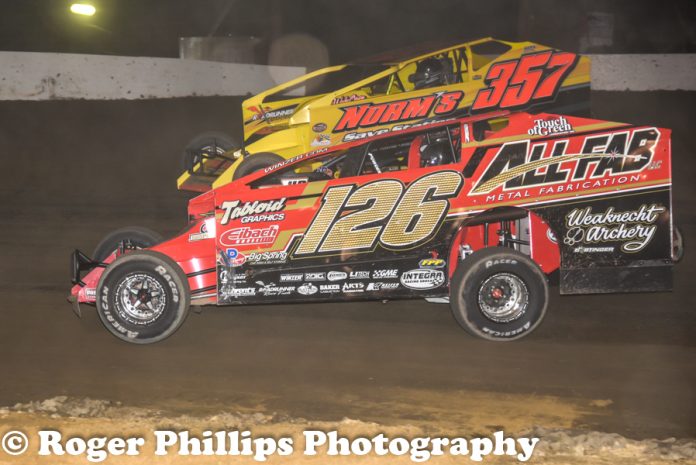 It has been a rocky start to the 2019 season for multiple-time Grandview Speedway track champion Jeff Strunk. Each time the Glenn Hyneman owned No. 126 has been to the track this year the results haven’t been up to their standards. Mechanical issues have sidelined their efforts.

Saturday night they got back home to the Grandview Speedway and things finally turned around for the veteran combination. Strunk started the race from the inside of the fourth row alongside eventual winner Matt Sheppard. He went on to finish in the runner-up spot.

“It took a big monkey off our back,” commented Strunk afterwards. “It feels good. We are off to a crappy start so it was nice to have a good night.”

Strunk was nearly one spot better but a mid-race restart in which he was able to get the jump on Sheppard was called back after a caution. On the next start Sheppard wasn’t going to give him another open look at the lead.


“He was good,” Strunk said of Sheppard. “He’s too good and he’s not going to make mistakes. All I could do was hope to get a good enough run at him and clear him, but that’s probably not going to happen 99 out of 100 times. I think that one restart we probably hit the bottom the best of anybody. We had a shot at him, but it wasn’t enough.”

From that point Strunk got in line on the top as it was the preferred groove for much of the 50-lap battle.

“The top was too good,” commented Strunk. “Even when it’s like that it’s still passable. That’s why I love racing here. No matter what you can still pass guys. As the race went on the track evened itself out, but at mid-race you had to be on the top.”

So although it wasn’t the win Strunk was looking for, it was a step that will get him and his team back on track.

“We got some morale back,” mentioned Strunk. “We got some confidence back and we got things going in the right direction again.”