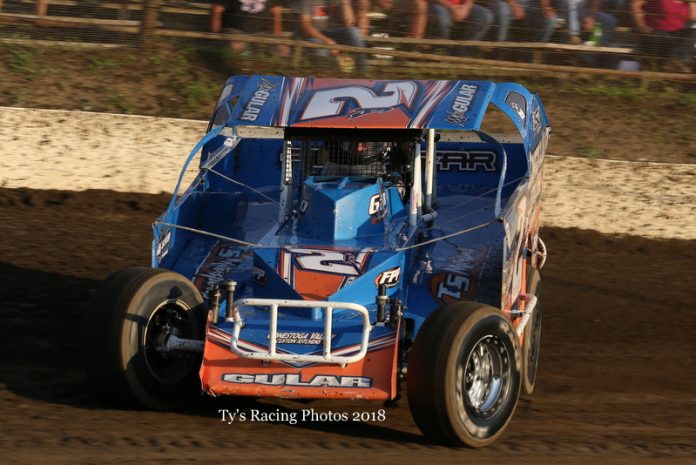 Continuing their trend to branch out and seek new adventures and challenges, the Terry Fasnacht owned No. 2A racing team driven by Mike Gular has decided to try their hand this season on Saturday nights racing at the famed Orange County Fair Speedway. After taking the title away from the likes of Craig Von Dohren, Jeff Strunk and Duane Howard last season at the Grandview Speedway it would only seem natural for this team to return to “the hill” and defend their title. But with Chris Larsen of Halmar International turning the Modified racing world upside down with the money being offered this season at “The Legendary House of Power” Orange County Fair Speedway, Gular and his team have decided to make the switch to try and bring some of the cash back to Pennsylvania.

DirtTrackDigest.com reached out to Gular today to get his thoughts and reasons on why the team decided to make the change.

DTD: Who’s decision was it to make the switch to Orange County?

Mike Gular: “It was a team deal, we all sat down and talked about it and basically it was just going to be what’s best for us as a team. We had planned on going to that $100,000 to win weekend and doing that would’ve taken us out of the points at Grandview so we figured we should just run for points up there at Orange County and see how we fair and get some experience at a different track.”


DTD: What prompted the team to make the change?

MG: “The money being offered is obviously the big thing and we have two big-block cars ready to go and you don’t always get the opportunity to travel like this for the summer so we’re going to take it. Plus, they have a pretty nice schedule which gives you a couple of weeks off here and there so we can go other places. They have Easter weekend off and Memorial weekend off so we can go to other tracks and race if we want to and sometimes you just might need a break during the summer.”

DTD: You and your team has had success at Orange County at the past couple of STSS north races with a win and a fifth-place finish, but those were on American Racer tires. Do you think you can continue that success switching to racing on the track mandated Hoosier tires in which you don’t have that much experience with?

MG: “Yeah I do, we’re going to see what happens. I know there will definitely be a learning curve in the beginning of the year. I don’t know if we’ll have success right out of the gate, but I know we’ll get there, I’m sure of that. Once we learn what to do and how it works and what the guys are doing to their tires, I think we’ll be alright. I have a good relationship with Bicknell and I can always call Randy Williamson to get his input on what to do with the tires and the set-up.”

DTD: You won the title last season at Grandview albeit with another car owner, what are your thoughts about not returning to defend that title?

MF: “It’s kind of a bummer, but it is what it is. It would’ve been nice to go back there but with the schedule we wanted to run and the races we have a chance to run it’s something we think we needed to do as a team to get better all around. When you have a $100,000 in big blocks sitting here and they are offering a $100,000 to win weekend deal, we’re gonna go. I talked to the Rogers (family, owners of Grandview Speedway) and explained to them why we made our decision and they wished us luck. We’ll still hit Grandview once in a while. They have the Thunder on the Hill shows and if Orange County rains out we are only five minutes away so we can always decide to head over there. I’ve been at Grandview for 19 years and it’s not easy to leave your home track. I love the place but it’s kind of neat to do something different and exciting. I knew I was going to catch a bunch of s**t for not going back to Grandview and defending my title. It’s absolutely no disrespect to Grandview, I love place, I love the people and that’s my home and I still consider it my home track. It’s where I grew up. But change isn’t always a bad thing sometimes.”

DTD: Size up for the competition at both Grandview and Orange County, how do you think you fit into that mix?

MG: “We’ll see.  I don’t really now right now. Hopefully good. I think it’s going to be a learning year and obviously like I said there’s going to be a learning curve. Hopefully we adapt quickly and get things figured out and it doesn’t take too too long. They have (Anthony) Perrego and now (Brett) Hearn’s back there and obviously those guys are really good there and they have a whole bunch of local guys who are really good there too. I think the competition there is as good as Grandview’s, different guys of course but really anywhere you go anymore there is really stout competition and there’s no cherry picking anymore at any of these tracks.”

DTD: Is it going to be tough driving by Grandview every Saturday which is only five minutes away and make the two- and half-hour trip to Orange County?

MG: “We’ll we don’t have to really drive exactly by it, but you can hear the track from my house, so I get what you are saying. We’ll see.  On the good night’s it won’t be so bad but on the bad nights I’m sure it will be miserable.”

DTD: When the 2019 season is over at Orange County, what would it take for you and your team to have considered it a successful one knowing and understanding that this is your first-year racing there?

MG: “Hopefully we can win one or two races and be competitive. That’ll be the biggest thing, to go up there and be competitive and represent Pennsylvania. It’s definitely out of my comfort zone and I am a little nervous, but we have good support. I really think running there weekly will help me out in running the STSS South series which are generally bigger tracks. I’m more of bullring sort of guy and I have to get used to these big places. We’ve had some success here, but I still have a lot to learn.”

If there is a team that can do this and make the transition it will be the Gular/Fasnacht team. Starting last season, the team worked their butts off just to build a team almost from scratch and to accomplish what they did just shows the determination of the team. I wouldn’t be surprised at all if we see Gular standing in victory lane this season at his new Saturday night home the Orange County Fair Speedway. I wish the team nothing but the best in their new venture.