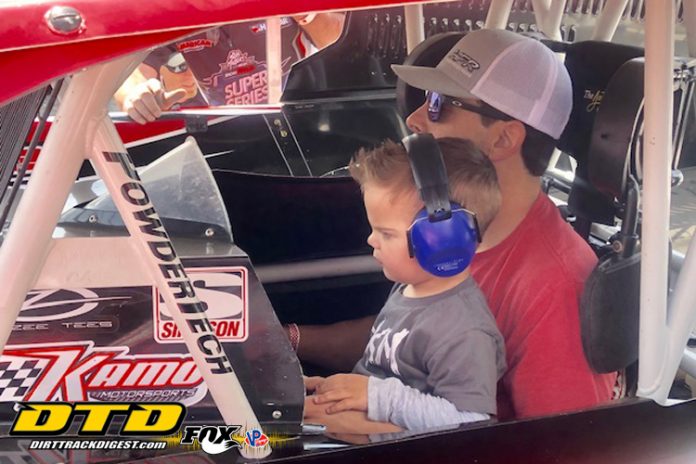 It was curiosity that took us to Fonda Speedway on Saturday because the only thing on the track agenda was the claiming of the front row pit spots for the upcoming season. Teams that had front row spots from last season would have first right of refusal and any other racers looking to claim a front row spot would have the chance to mark their spot on Saturday, April 6 from 10 am to noon.

When were arrived Angela Hanson was sitting in the pit trailer taking requests for spots and while we were there, Darwin Greene claimed his spot. Yes, Darwin, his wife and son, drove 2-1/2 hours from Pennsylvania to mark his front row spot with a No. 1 DGR sign. Darwin has been a Saturday night Fonda regular for many seasons and is a fan favorite with two wins at the “Track of Champions”. There was plenty of activity at the historic fairgrounds as owners hauled out their campers and boats from winter storage and new Promoter, Brett Deyo and his staff were busy getting ready for racing and getting the new equipment in the concession stands ready and setting up for a staff meeting later in the day. There wasn’t much left at the track when Deyo took over and he and his team had to start new with concession and track equipment.

The track surface looked great and Deyo said they have one more screening and grading to do before this Saturday’s practice. As we walked around we noticed that a lot of work had already been done to shape things up for the upcoming season. Deyo says he’s been lucky so far this season, good weather for his opener at Georgetown, and his STSS at Port Royal and good weather to prepare for the season opener at Fonda. It looks like things should go as planned for the practice session this Saturday at Fonda. As for his opening night at Fonda on April 20th Deyo expects to have a good turnout of racers and fans. Orange County Fair Speedway does not race that night and some of the drivers have indicated they may be at Fonda because of the $4,000 to win with draw for position. There is a lot of positive buzz about Fonda this season and Deyo is a very positive person himself and he looks forward to taking the stewardship of a track like Fonda with so much racing history.

Halmar Friesen Racing is giving back to Crossroads Center for Children in Rotterdam, NY and bringing awareness to autism in a very unique and special way. For $1,000 your name or your business’s name can be displayed on 1 of 50 autism awareness puzzle pieces on Stewart Friesen’s No. 52 truck at the NASCAR Gander Outdoors Truck Series race in Dover, Delaware on May 3, 2019. Go to the Halmar Friesen Racing website www.hfrraceforautism.com for details on how to be a part of this very special promotion.

Matt Sheppard of Waterloo, NY was the winner of the Short Track Super Series event that opened the 100th Anniversary season at Orange County Fair Speedway in Middletown, NY this past Sunday. It was a first feature win for Sheppard on the “Hard Clay” and Matt now has won at 40 different tracks from Canada to Florida and has 338 wins: 286 Mod wins, 24, Small Block Mod wins and 28 Sportsman wins.

Having 60 Modifieds on hand for the Hard Clay open was like days of old; six heats and three consis and a first time winner, who could ask for anything more. And on top of all that the weather was outstanding.

Each trip to Orange County we see that improvements continue and in speaking with Chris Larsen he said it’s a work in progress. Just seeing what has been done so far is like a dream come true for the many fans of the storied oval. Chris says he is proud he could be a part of the 100th Anniversary and in bringing the celebration to the fans throughout this season. Knowing that Chris started as a fan at OCFS and has returned to do all that he has done to bring this grand old speedway back to its elegance is beyond what we could have imagined after losing the New York State Fairgrounds’ Moody Mile. In the few minutes we spoke with Chris we got to hear the respect he has for the racing community and all that are part of it. Dirt Track Digest TV was busy at the Hard Clay open. We shot this as they were interviewing Brett Hearn prior to their live coverage of the race. Hearn is returning to Orange County this season, where his racing career began. Out of his 43 years of competition at Orange County, Brett has at least one feature win per year in 41 of the 43. Only 1998 and 2011 saw the Jersey Jet winless. One our way to Orange County we stopped in at Mike King’s car show in Nassau just long enough to get this shot of NYSSCA President, Dan Wood and his vintage No. 115 parked alongside a modern day No. 115.

News out of Glen Ridge this past week, along with their regular season of racing divisions that is scheduled to start May 5th, they will be holding nine nights of Modified events, the first being on May 19 when the Palmer Service Center fueled by Sunoco Racing Modifieds take to the track.

We look forward to the practice sessions at Fonda this Saturday. Also on Sunday, Utica Rome opens their season with the Spring Break Shootout; $2500 to win for DIRTcar Mods and $1500 to win for DTD 358 Mods. We hope to make this too.

Unfortunately we will close this on a very sad note. This afternoon we received a call from Rich Carpinello of NESCOT telling us that veteran racer, Mike Ehring had passed away. We have not details at this time but just wanted to let our readers know.