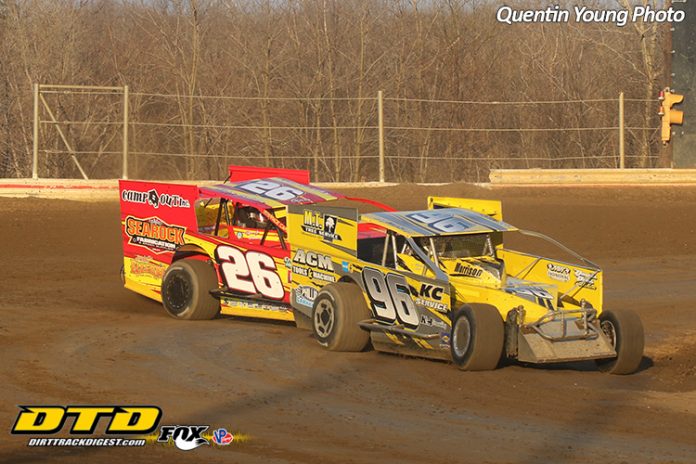 After the original start of the 30-lap Vahlco Wheels Modified feature was marred by a caution, Cale Ross rocketed to the front on the ensuing green flag with Brian Papiez next in line. As the top two of Ross and Papiez were pulling away from the pack, Mike Butler was continuing his march to the front as the tenth place starter slipped into third place on lap five. Following the second and final yellow flag of the race on the eighth circuit, Ross was still on top with Butler nudging past Papiez for second with sixteenth place starting Billy Pauch Jr. jumping into fourth. One lap later, Papiez regained the runner-up spot. At the midway point of the race, Ross had a half-straightaway advantage over Papiez. Two circuits later, Pauch. Jr. was just in the process of driving by Butler for third when the second place running Papiez pulled into the infield and out of the contest. Now with Pauch Jr. in second and in hot pursuit, Ross was beginning to encounter the tail end of the field with eleven laps remaining. By the twenty-second tour, Ross’s margin over Pauch Jr. had evaporated to a mere two car lengths in heavier lap traffic. Over the next few tours, Ross had Pauch Jr. on his bumper. After a brief side-by-side duel, Pauch Jr. scooted past Ross with only five revolutions left in the race. Over the final laps, Pauch Jr. increased his lead and went unchallenged to grab the checkered flag for his twenty-second career Modified win. Ross held off Butler to take second. With Butler in third, Ryan Krachun finished in fourth after starting the race in eleventh. Brandon Grosso, who started the race in thirteenth, came home in fifth. The winners in the Vahlco Wheels Modified heat races were PJ Oliver and Brian Papiez.


In the originally scheduled 20-lap Hammer Sportsman feature, Jim Housworth was declared the victor after the time limit was reached and eight laps were completed. The victory was the fifth Sportsman win for Housworth at New Egypt Speedway. Second place was captured by JT Trstensky. Twelfth place starting Steve Davis finished in third. Joseph Brown and John Criscione filled out the top five. JT Trstensky and Steve Davis were victorious in the Hammer Sportsman heat races. The consolation contest was captured by Brad Roberts.

For the twenty-seventh time in his career, Bill Liedtka took top honors in the 15-lap Street Stock feature. Liedtka, who was involved in a second lap caution with Jon Meyer, roared back through the field and took the lead from Brian Ludwig on the seventh tour. Meyer slipped by Ludwig on the final circuit to take second. With Ludwig crossing the line in third, Billy Wroble was fourth and Vern McLaughlin finished fifth.

Plumsted Township Night takes place on Saturday, April 20 at New Egypt Speedway as all residents of Plumsted Township will receive free general admission with proof of residency. On the track, the Vahlco Wheels Modifieds, Larry’s Hot Rods & Harley’s Northeast Wingless Sprint Cars, Crate Modifieds, 4-Cylinders and the Lyons Construction/Metal Fab Rookie Sportsman will be in action. Pit gates unlock at 3:00 p.m. with the grandstand ticket office opening at 4:00 p.m. Warm-ups get underway at 5:00 p.m. and the first green flag waves at 6:00 p.m. Admission to the grandstand is $20 for adults, $18 for seniors 65 and older, $10 for teens 12-15, $10 for military personal and their spouses with ID, and Kids 11 & under are FREE. Pit admission is $30 with a New Egypt Speedway license and $40 without.