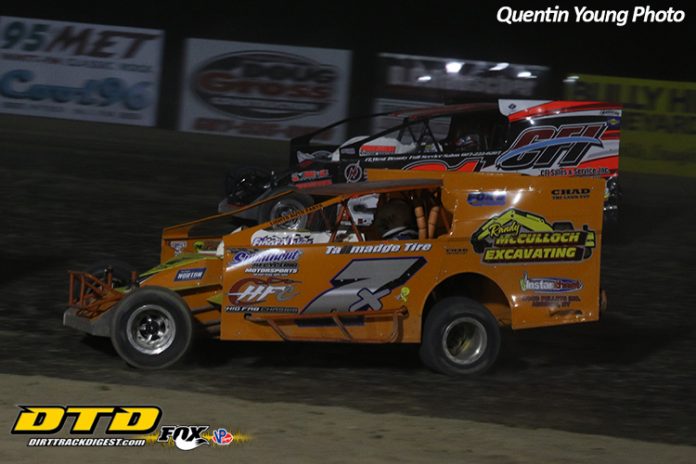 DUNDEE, NY – Steve Paine picked up right where he left off at the end of the 2018 season at the Outlaw Speedway by winning the make-up Dutch Hoag Memorial Triple 7’s Modified feature event to start the 2019 season.

Tyler Siri and Tommy Collins Jr. led the 25 car field to the opening green flag for the 70 lap A Main and it didn’t take long for “The Hurricane” Steve Paine to find his way to the top spot from his outside fifth row start position.  The event went non-stop for the first 61 laps with Paine comfortably out in front, but all eyes were on “AJ Slideways” Alan Johnson as he powered his way from the last starting spot into the top three.  On the lap 61 restart Johnson was able to dispose of then second place runner, Cory Costa and set his sights on the high flying Paine.  However, Paine had a commanding lead and the laps ran out as Steve Paine received the $7,000 winner’s check for winning the event name in memory of one of upstate New York’s best ever Modified competitors, Dutch Hoag.  Johnson had to settle for a well-deserved runner up spot followed across the line by Cory Costa, Tyler Siri and Eldon Payne Jr.  Over 40 Modifieds saw action with heat wins going to Brady Fultz, Dillon Groover, Donnie Lawson, Bryon Worthing and Billy VanPelt.  Ron Cartwright Jr. and Ryan Susice picked up wins in the two consolation events for the Friendly Chrysler, Dodge, Jeep, Ram Modifieds.

Glen Whritenour once again showed why he has been the man to beat over the past two years in the Stan’s No Tubes Street Stock Division at the track as the two time and defending track champion dominated the Empire 100 for the full fendered class.  By virtue of picking up a qualifying win late last fall, Whritenour was able to secure the pole position for the 100 lap grind, however several other heavy weights in the class including Kurt Stebbins, Jared Hill and Dylan Cecce were right there throughout the early going.  As the laps wore on it became more of a two horse race as Whritenour and Cecce began to show their muscle and pull away from the rest of the field.  On lap 89 Cecce ran into mechanical issues and was towed pit ide and from there it was clear sailing for Whritenour as he picked up the win and the $2,000 winner’s check.  Finishing is second place was veteran competitor, Carl Cleveland, third went to CJ Guererri as Gene Sharpsteen and Kurt Stebbins rounded out the top five.

Round one of the 2019 Outlaw Speedway Sunrise Insulation American Racer Tire Sportsman Series got off to a great start will veteran drivers Stacy Jackson and Steve Grey bringing the 24 car field to the line for the opening green flag.  However it was outside second row starter, Kevin Root who stole the show and came home victorious in the first of seven series events for the American Racer shod 602 Crate Sportsman. Jackson, driving for a new team put on a steady drive to finish second chased across the line by 2017 Outlaw Speedway Track Champion, Karl Comfort, Dustin Jordan with Steve Grey rounding the top five.  Heat wins went to Will Shields, Dale Welty, Tim Guild and Dave Dipietros.  Alex Hoag picked up the win in the consolation event.


The second series event in the Outlaw Speedway Sunrise Insulation American Racer Tire Sportsman Series will be next week as part of the Spring Nationals.

Second Generation pilot, Brandon Smith driving a MOPAR powered IMCA Modified made short work of the field in the 20 lap Marion Decker Insurance IMCA Modified feature event by besting a stellar field on this day.  Smith, who is a regular at the Outlaw Speedway looks to use this feature win to perhaps springboard him to his first ever track title in the class.  He was followed across the line by Tyler Stoddard, Eddie Sites, Rodney Morgan, Keith Lamphere with Gary Roberts rounding the top five.

The Doug Gross Construction Crate Late Models were on the card in what will be only one of a handful of events that they will participate at the track in 2019.  Damian Bidwell has become a household name in Crate Late Model racing and he was not to be denied on this day as he picked up the win in the 20 lap A Main.  Scott Waters came home for second, 2018 Outlaw Speedway Track Champion, Chad Homan was the heavy favorite coming into this event, but had to settle for third.  Chris Fleming came home for fourth at the finish followed across the line by “Mr. Excitement”, Jeremy Wonderling.

Brad Shepard makes the long tow from Western New York each year to compete in the Dutch Hoag Tribute Event.  By winning the feature last time staged in October of 2017, Shepard showed that his win then was no fluke as he once again found the Outlaw Speedway Victory Lane by beating a heavy field of local talent in the 4 Cylinder feature event.  Shepard started on the pole and never looked back as he picked up the “W” over local competitor and second generation pilot, Scott Lehman Jr.  Cole Susice finished third chased across the line by Scott Lehman and Quinn Wallis.

The Marion Decker Insurance Agency sponsored Hobby Stock Class continues to grow by leaps and bounds with over 20 cars competing for the Dutch Hoag Memorial Trophy.  As the season progresses the car counts will continue to grow in this true entry level division.  On this day it was Grayson Albanese hitting pay dirt and picking up the win over Tyler Bushey, Justin Eldridge Eric Williams and Tommy Groover.

Last but certainly not lest the 600 cc Sprints were on hand for a rare appearance at the Yates County oval.  Ivan Forney picked up the win in the A Main event followed across the line by local favorite, Kirsten Dombroski.  Claire Kolodzicjczak finished third, Drew Pascuzzi was fourth with DJ Shuman finishing fifth.

Heat wins were claimed by Forney and Dombroski.

Some 192 machines representing the 8 classes of competition were in attendance under absolutely beautiful sunny skies and warm temperatures for the Dutch Hoag Memorial.

Up next at Outlaw Speedway it will be the 4th Annual Spring Nationals set for Friday, April 19, 2019.

For all classes of action, gate times and ticket prices go www.facebook/OutlawSPeedway/ or the track web site at www.outlawspeedwayllc.com.