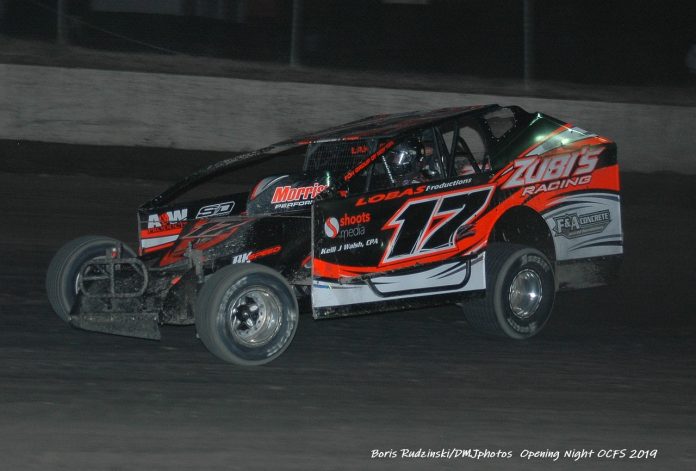 Stewart Friesen came up one spot shy in the Hard Clay Open losing to Matt Sheppard while missing out on a possible $12,000 payday. Saturday night in the regular season opener Friesen was not going to be denied as he took home top honors in the Carl “Fuzzy” VanHorn Tribute 71-lap affair to earn $7,100.

“It’s a really good night,” stated Friesen after the main. “It’s cool to win the Fuzzy Van Horn tribute race. I grew up racing with David (VanHorn) since we were 15 or 16. With my dad growing up at Syracuse in the 70’s there are tons of stories about Fuzzy. It’s neat.”

Friesen may not have had the best car in the big-block feature, but he made the most of his opportunities. He chased down Anthony Perrego and passed him on lap 46 after Perrego bobbled in traffic. Perrego got way out wide allowing Friesen to dart underneath him for the top spot. That was all he needed to take control and the win.

“It was an interesting race,” commented Friesen. “With that number of laps, we kind of missed it on fuel load and a bunch of stuff. We were able to sneak away with one. He just cooked it into three there that one time and got a little bit of the dust. It was a fine line. When he did that I planned to just hang on the bottom. It was probably a little slicker on the bottom than it was a lane and a half up. There was a pretty good middle there. Getting through one and two clean was key.”


In the accompanying small-block event Friesen’s No. 44 DKM Chassis ride ended up in the runner-up position after he started 11th in the field. Friesen struggled to get by youngster Dillon Steuer and that was the difference maker. He ran out of time to track down eventual winner Brian Krummel.

“We were good,” he said of the small-block. “Dillon (Steuer) is a good friend of mind. He’s a good kid. I wanted to make sure I raced him clean. He did good. He started right in front of me. We came up through the traffic together. That was pretty cool. By the time I got clear Brian had checked out.”

Brian Krummel is the defending OCFS small-block champion, but that title came without garnering a single checkered flag at the Hard Clay. Saturday night he got his title defense off to the best start possible by grabbing the victory in the 25-lap, $2,500 to win feature.

“It’s not easy here,” commented Krummel. “You got Brett (Hearn), Stew (Friesen), and Anthony Perrego. That is as good as you can get. Great job for whole team. We needed it bad. It was a long season last year. It’s awesome to come right out of the hole with a win.”

Krummel used a nice crossover pass on race leader Joey Bruning on a restart on lap six to take the lead. From there, he never looked back.

“The thing was firing right out of the box,” mentioned Krummel. “I was hitting my marks with no big mistakes. I was able to get above the bumps going into one then cross over and get low coming off of two. That seemed to really be helping. I felt comfortable on that restart as good as the car was firing I could be even with him (Bruning). I’ve raced Joey for a long time.”

Krummel, who has competed in only a handful of big-block races, indicated he had a good car in that feature as well. He finished inside the top 10.

“I was decent whole race,” cited Krummel. “Once again, look at the top six cars in front of me. I’m not ashamed at all. I got 20 big-block races under my belt. They got 20 years. I settled in, gave up a spot here and there, but stayed in one piece. The track was tough and I didn’t want to take a chance of not bringing it home in one piece.”

Brett Hearn gave Friesen a challenge late in the race and had there not been a caution with four laps to go for John Ferrier he might have walked out with the big check.

“I was working on a line that was getting me some pretty good momentum,” said Hearn. “I worked up to his bumper and I was just trying to reshape one and two a little bit. If I could have got even with him that would have been good enough to get in a run through turns three and four. He just doesn’t make any mistakes. That is all there is to it.”

Hearn had to come from the back in the small-block race after getting spun early in the feature with his No. 29. He said the new number is for Kevin Cross. That was the number for Cross Motorsports.

It didn’t take Mike Gular long to get adjusted to the Hoosier tires. Gular went out and set fast time for the big-block Modified division before securing a third-place finish on the podium behind Stewart Friesen and Brett Hearn in the main event.

“We were pretty surprised with that (fast time),” stated Gular. “We talked to Randy (Williamson) at Bicknell during the week about what to do with them and any changes we had to make to the car. Bicknell is a big help with the Hoosiers. They know the Hoosiers better than anybody. Randy was a big help. I guess we did it right.”

In the feature Gular was able to get strong restarts which helped propel him to the front after the inversion placed him fifth in the start order.

“We were running seventh or eighth for a while,” cited Gular. “We were good on restarts and that seems to be important here. Everybody got filed out and we just rode and tried to keep good tires on it. We made it count on restarts. That is where you pass here. We’ll be good. This is a good start. Hopefully we’ll build on it a bit and find some speed.”

In the accompanying small-block race he finished outside the top 10 after nearly slapping the first turn wall early in the race.

Due to the large car count, the program got off to a late start. It was difficult to get everyone in the pits in a timely fashion with space at a premium. The program got underway a little more than an hour late and ended around 1 a.m. with the Sportsman feature checkered flag…

After locking in 12 drivers based on time, two heat races were held for the Modifieds which went to Tommy Meier and Kenny Tremont. There was no consolation event…

In the small-blocks, due to the large car count, three heats were run with Gular, Flammer, and Brett Haas taking the checkers. Like the big-blocks, there were no consolation events…

It was a tough night for defending track champion Perrego. He was involved in multiple incidents in the small-block race which resulted in his No. 44 being cradled to the pits with significant damage to all four corners of the car. In the big-block event he was looking to regain the lead from Friesen when a left rear tire went soft late in the race. He went in and changed the tire. He finished mid-pack…