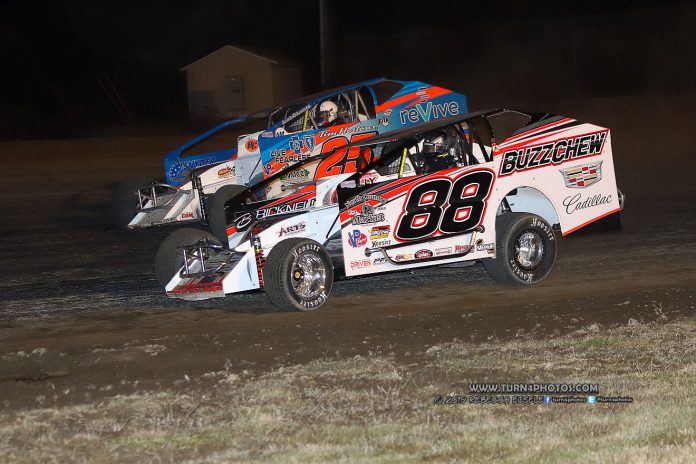 Mat Williamson did not have the best of times at the DIRTcar Nationals in Florida, but since then, Williamson has turned up the heat. A podium from the back at Port Royal, a strong showing at Orange County, and a second in the Super DIRTcar Series opener at Can-Am is worth some attention.

“The nice thing about Florida is that it doesn’t really matter,” Williamson said. “We struggled down there a little bit, just took some getting used to everything and getting comfortable with the car. We made some changes since Florida to make ourselves better and it certainly showed. I’m excited about the opportunity.”

Throughout his career, Williamson has primarily piloted his own S&W Service Center No. 6, but picked up a ride with Jeff Behrent for a number of shows last year. This year, Williamson finds himself in a whole host of new rides, including the Buzz Chew No. 88.

“I drove the Behrent’s car last year some, and drove for Mike Payne for a couple races a few years ago,” noted Williamson. “Outside of that, it’s all been my own stuff. This year we have a whole host of rides with this car, Jeff Behrent, Roger Heroux, the Wendt car at Ransomville, so we got a lot of good cars this year.”


Having ran family equipment his whole career, what is it like jumping into all these new cars?

“The tough part is there is expectations, they hired me to do a job and I need to win,” Williamson said. “That’s the tough part about racing for others, you need to perform, and today is a good way to start that.”

With his own equipment, Williamson builds and maintains his own cars, but this isn’t exactly possible with some of his rides located hours away. How much of a hand does a hired gun have in building his stuff?

“Usually I build everything with the family car, but this one I put the body on and my seat in it and shipped it off to the team.” Williamson noted of his work on the car. “These guys do an awesome job at preparing a car, to do 100 laps on a track like that on April 13th way up north, challenging track conditions, and I never worried about breaking anything.”

Next up for the Super DIRTcar Series is Fulton Speedway. Last October, Williamson was out front of the Outlaw 200 and looking strong before a driveshaft broke under caution and ended his night. With his current momentum, Williamson ought to be a contender April 27th.

“After Florida, we were kind of second guessing ourselves with the car, but I convinced Spot (crew chief) to stick with me,” Williamson said. “We’ve run the same setup everywhere we went, and I’ve had success with my own stuff this season, we stuck to it tonight, and it gives us good confidence going into Fulton in two weeks.”

Billy Dunn kicked off his 2019 season Saturday night in the Super DIRTcar Series opener, claiming third at Can-Am in his self-owned mount. Dunn has a lot of experience at Can-Am, winning the 358 Modified title the last few years and gaining a ton of trophies in the process.

“We has a bit of a home track advantage early in the night, but that went away,” Dunn said. “It goes away with a 100 lap race, and the track was tricky tonight, not normal Friday night conditions. Sheppard was good, I thought I had a couple runs at him, but didn’t have enough for him. I got tight, and Williamson got under me, but for the first race out I’m happy. Some of these guys got a whole month of racing under their belt, and this is our first”

Dunn has driven for a number of teams over the past few years, such as the RLM No. 9 at Can-Am, and the Slack team in the big block ranks. However, that all changed when the calendar turned to 2019, and now Dunn is his own car owner.

“It’s a new team, and a new bunch of sponsors,” noted Dunn. “This is actually last year’s car I bought off of my old owners, so it’s pretty much the same as it came off the track at Oswego and we just maintenanced it. The car itself is a year old, but it’s kind of my first go of being my own car owner. The big block is mine, and my new sponsor Intergrow owns a small-block.”

New teams often come with schedule changes, however Dunn doesn’t plan on doing much switching around after a successful 2018 that saw him take two track championships.

“I think we’re gonna stick to the same schedule as last year,” stated Dunn. “We’re going to run here at Can-Am on Friday, and then Canandaigua on Saturday. We’re going to start off at Utica on Sunday’s, but I don’t know if we’ll be there all year, we’ll see how we’re going after a month and decide from there. The Series will be hit or miss, and we’ll run all the Weedsport shows. Places like Canandaigua, Malta, Brewerton, Fulton, we’ll hit all their big stuff.”