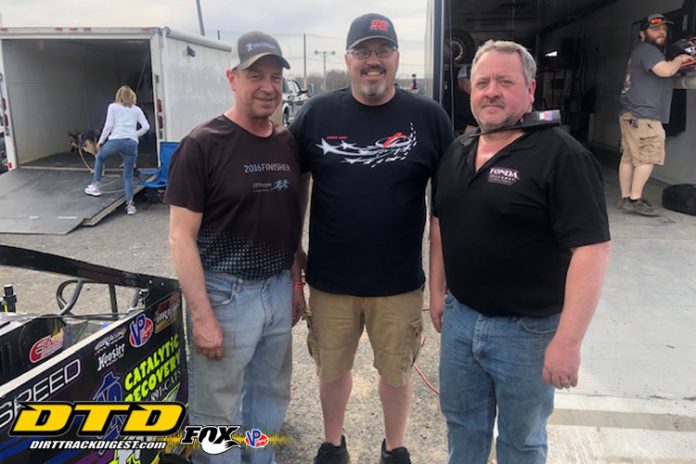 In the Capital District it was open practice day for all three speedway’s, Fonda, Albany Saratoga and Lebanon Valley and we took off for Malta on Friday only to run into rain in Clifton Park when we exited the Cracker Barrel so we didn’t go any further and therefore missed any practice at the Great Race Place. On Saturday the weather people promised a beautiful day and they delivered. You couldn’t ask for better or for a better turnout at Fonda for their practice day. It was also a new era at Fonda. Cars in the pits totaled near 80 and most of the drivers we spoke with agreed it was typical spring conditions on the track. A few regulars were racing somewhere else and some didn’t have their cars ready. There were the Fonda Faithful fans and some very new ones, like 9 month old, Kenna Rose.

There were adjustments, and much camaraderie among the teams in the pits and the fans were catching up on off season happenings and trying out the food from the concessions. Ed had a hot dog and said it was reminiscent of when Ed and June Keyser worked the pit concession during the Compani era. With Denise Page in charge of the concessions we knew there would be quality food at reasonable prices. We visited the novelty booth and there we saw a long time friend, Mike Deyo and his wife Joanne who will be manning the booth on Saturday nights for their son.

The folks at the Fonda Museum were busy bringing in the things that were stored during the winter. It takes much work and Dave and Jackie Lape are always on top of what needs to be done. Dave is still experiencing pain from his back surgery of last summer but says he is slowing getting back to a new normal for him.


Fonda Operations Manager, Jamie Page gave his welcome to all the drivers at the drivers’ meeting and said he has only one rule: I will talk with anyone, but I will argue with no one. If you want to talk with me, I’ll talk, said Page, “If you are going to yell at me, I will walk away.” Good advice for anyone and we applaud him. We’ve seen too many confrontations there was no need for, just because of emotions. Page is seen in this photo with Rocky Warner and Tim Dwyer. He walked through the pit area throughout the day trying to get a word with all competitors and thanking them for coming. To start him off as Fonda’s newest promoter, Ed presented Brett Deyo with a framed copy of the very first cover of the Fonda Speedway program,1953. There is a unique story behind it; although it was printed it was never used. Why? Because 1951 Indianapolis 500 winner, Lee Wallard of Altamont, NY was the track manager, and on the cover. He did not run NASCAR and because Fonda was a NASCAR sanctioned track at the time, his management position and photo on the cover were squashed by NASCAR. A new cover was printed and put on the program. And the sanctioning wars continue today.

After inspections on the hot pit, Deyo called a drivers’ meeting and welcomed all to the track for the season, with a message of a new beginning, one where the race teams at Fonda Speedway will share in his success. For those who may see him as the new kid on the block, he’s not. He has successfully promoted Georgetown Speedway in Delaware for the past few years, and he has a ten-year proven success record with his Short Track Super Series and his American Racer Cup Short Track Super National will celebrate 12 years this October at Afton Speedway. Our general consensus at the end of the day at Fonda’s open practice was positive and we now look forward to opening night this Saturday when all the Fonda regulars will be back in action for some big money, $4000 to win for the Sunoco Racing Modifieds. And just this week the April 27 night at Fonda became another high paying event; Fonda Allegiance Night will give the Fonda Faithful the opportunity to show the racing world that Fonda is back by bringing out your old and new Fonda Speedway apparel and fill the grandstands with fans showing their allegiance to the “Track of Champions.” Winning payoff for Mods on the 27th is $8000. It’s important to check the Fonda Facebook and website because there is something happening all the time. While roaming the pits we ran into some Fonda history standing at the Steve Akers No. 27A. Keith Shoemaker, Katie Peek and Melissa Lazzaro all standing around reminiscing about how, what, when and where they all began their days at Fonda. For all of them it was with their Hall of Fame fathers, Kenny Shoemaker, Harry Peek and Lou Lazzaro and now they are all back in one capacity or another. Keith is a member of Steve Aker’s crew, Katie is also with Akers but it’s because her 14-year-old son, David Harrison Peek Britten (grandson of Harry Peek) is new to the crew this season. Melissa Lazzaro will be doing victory lane interviews at the track this season. When we first arrive in the pit area on Saturday we ran into a blast from the past; Tim Dwyer who will be returning to racing at Fonda this season in the Mike Bellinger, No. 28B Sportsman. According to Tim he left the sport in 2010 and when he was asked if he wanted a shot at retuning he was hesitant at first but with some coaxing from a few friends he decided to take a chance. We welcome him back and wish him well.