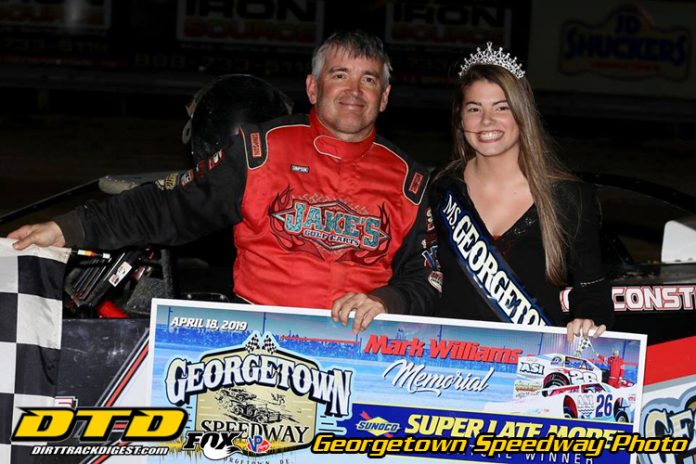 GEORGETOWN, DE – Jason Covert’s 2019 season has gotten off to a hot start including a win at Port Royal Speedway and a come-from-behind runner-up finish at Williams Grove Speedway in Pennsylvania.

“It’s been a humbling week,” an emotional Covert stated following his first-career Georgetown victory and breakthrough win in the First State.

“I lost a really close friend this week… this one’s for him,” Covert said following the death of his close friend Glenny.


Covert started in the sixth position at the banked half-mile Sussex County speedway. It appeared the outside row was the place to be on restarts and Covert put the exclamation point on that. Starting on the outside row, Covert quickly climbed to fourth before an early yellow reset the field. That was all Covert needed.

On the ensuing restart, he motored to the outside, around Amanda Whaley and Dale Hollidge and into second.

Covert than ran down pole starter Austin Hubbard in short order, sweeping around the outside to take a lead he would never relinquish.

Lingo was caught up in a yellow with less than 10 laps remaining, which sent him back to the ninth position, before climbing his way into the top-five using the outside groove.

The RUSH Late Models were in town for night two of four in their ‘Battle of the Bay’ weekend. All-time series wins leader Max Blair, coming off his win Wednesday night at Delaware International Speedway, rolled into the night with momentum on his side.

The Titusville, Pa., driver continued that momentum at Georgetown, winning the $3,000 paycheck.

Blair’s No. 111 launched off the pole for the 30-lap main event. From there it was nearly smooth sailing for Blair. His lone mistake came on a restart in which Georgetown local Matt Hill dove to the bottom and slid by Blair for the lead.

However, the move would be negated by a yellow before a lap was completed.

“I thought I really messed up there, I was worried about them rolling the top on me, I left the bottom wide open,” Blair stated of the move made by Hill.

Dale Hollidge, who started 12th, had a solid night as well, picking up top-five finishes in the Sunoco Super Late Models, and RUSH Late Models. Dillon Brown of Gafney, S.C., was the RUSH Fast Timer of the night, and rounded out his night with a fourth-place finish. Virginia’s Logan Roberson rounded out the top-five, coming from his ninth starting spot for a fifth-place finish.

C.J. Schirmer and Freddy Brightbill put on a thrilling show in the Southern Delaware Vintage Stock Car feature. Following driver introductions and pace laps led by the Mark “Coot” Williams No. 26, Schirmer beat Brightbill to the line by a half car-length to pick up the win. L.J. Walbert was honored as the highest-finishing Sportsman racer in the Vintage Stock Car Feature.

Matt Esham got his second win of 2019 on Thursday night in the Delaware Super Truck feature.  Esham and David Smith continued the theme of exciting racing. Smith threw everything but the kitchen sink at Matt Esham for the last seven laps, but never found a way by the now two-time winner, Matt Esham. Robert Smith, Shane Clogg, and Jerry Hill rounded out the top five.

Chris “Tippy” Martinez scored his first 2019 win in the Delmarva Charger main event. Joe Waters led the first eight laps before getting to the pit area after an engine appeared to expire.

From there Martinez held off the hard charging Ashley Merritt to pick up the win. Merritt, Brandon Riefler, Derek Swafford and Tommy LeCates rounded out the top five.

The track crew provided a wide, multi-grooved surface with a cushion around the top drawing praise from competitors….

The finish in the Southern Delaware Vintage Stock Car event required a review of the ‘video tape’ to determine the winner with C.J. Schirmer declared the victor by a matter of inches. The family of Mark Williams joined Schirmer in the Victory Lane festivities….

Racing started at 7:13 p.m., two minutes early, and despite time trials for 50 RUSH cars, the Super Late Model main was completed prior to 10 p.m. in a quickly run program….