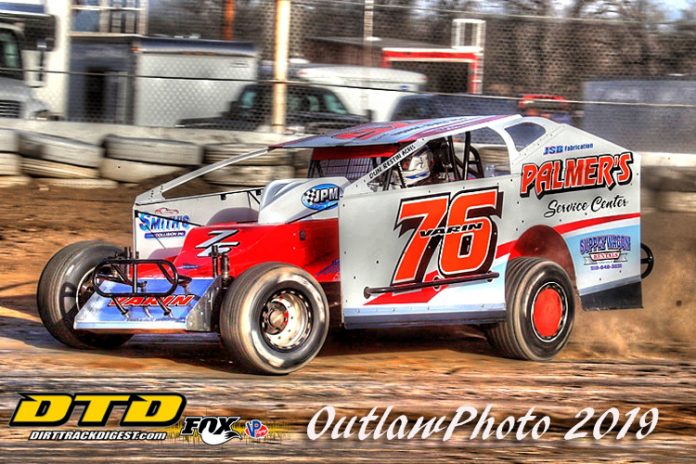 FONDA, NY – Regardless of what anyone says, a driver’s career is always measured by two things and two things only; race wins and championships.

From the turn of the century until 2010, nobody was better at the Fonda Speedway [in Fonda, N.Y.] than Sharon Springs, N.Y., native Bobby Varin. With a heavy right foot and a do or die mentality equally as aggressive as his driving style, he was simply the man of the decade racking up six titles and an impressive win total in short order.

Though the victories were still coming regularly and he maintained his competitive edge, he seemed destined to remain one spot behind legendary driver Dave Lape in the Modified title count at the famed Montgomery county oval. The drive to win was certainly alive and well yet consistency in his equipment and patience where racing politics are concerned withered rather briskly.

“For a couple of years, we were not a regular at Fonda for the whole schedule,” Varin remarked. “We were there for just over half the season for a few years but we were still finishing in the top-five in points. We finished second a few times but we had a couple of title chances taken away from us because of issues at the end of the season. It gets difficult at the end of the year when you’re running your own stuff; resources get slim.”


During the 2016 season, Varin was approached by two individuals that really need no introduction where racing in the Mohawk Valley is concerned; Alton and Carole Palmer.

What started off as running the famed No. 76 at special events throughout that season quickly blossomed into a full-blown ride for the then six-time Fonda Speedway track champ. Though it was viewed as a seemingly odd partnership at first, the new-found pairing between the Palmer’s and Varin quickly developed into a formidable and well-organized machine.

With a weekend sweep to close out the 2017 season at the ‘Track of Champions,’ which included a victory at the 100-lap Super DIRTcar Series event, momentum was no longer just a printed word in the dictionary and when the 2018 season commenced, Varin proved it. With victories at Fonda, Albany-Saratoga [Speedway in Malta, N.Y.], Devil’s Bowl [Speedway in Fair Haven, V.T.] and the Glen Ridge Motorsports Park [in Fultonville, N.Y], Varin and the Palmer’s were in top form. So much so that together they claimed not only the Fonda Speedway Modified title at seasons end, but the King of Dirt small-block Modified series title as well.

“Last year was enjoyable,” stated Varin. “There’s no stress driving for the Palmer’s [Alton and Carole], their primary goal is to go to the track and be competitive and have fun. It’s not all about winning, though that is the ultimate result we want, but when I first talked to them, they really stressed the importance of having a good time instead of worrying about winning so much that it makes everyone miserable.”

For the first time in his career, Varin had everything a race car driver could ever hope to possess; car owners who give him everything he needs to get the job done behind the wheel without all the stress that tends to be associated with such a prospect.

“They [Palmer’s] give me great equipment and a great atmosphere,” continued Varin. “We have well-maintained Teo racecars and JPM engines. They keep me right on par with our competitors and they really do everything they can to give me a car that can get the job done. I can’t express enough how much I’m enjoying this stage of my career right now.”

2018 wasn’t just another title for the Palmer’s Service Center driver; it happened to be a milestone that he once viewed as unreachable at the start of his Modified racing career 30-years prior. Tying Dave Lape – his former competitor and at times also his rival – became a dream that was finally realized and one, for that matter, that he still hasn’t quite come to grips with; at least not quite yet.

“Tying David is satisfying,” he stated. “Did I ever think it would have been possible when I first started racing? No. We were just looking for something to do as kids to stay out of trouble. To look at the win list at Fonda and see where I am among all of those legendary names is humbling. I never thought that I’d be mentioned with any of those guys.”

With a career that has now surpassed the 30-year mark behind the wheel of a center-steer modified, there really isn’t a whole lot that Varin hasn’t accomplished. With his 49th birthday edging ever closer, some would think that he would be looking towards a life outside of racing in the near future; those same individuals would be irrefutably and undoubtedly wrong.

“I’m at a great point in my career,” remarked Varin. “The stress is off of me financially and at the track. I can’t say it enough; Carole reminds me often that it’s more important to enjoy ourselves than anything else. Don’t get me wrong, I’m a competitor and I want to win, that’s why I play the game, but at least I know that when I come in the pits, I’m not going to get screamed at for a third-place finish. I can honestly say that at this point in my career, as long as the Palmer’s want to race, I want to drive for them; I’m not looking at hanging it up any time soon.”

After a successful 2018 season, Varin and the Palmer’s are ready to hit the tracks with the same amount of momentum and enthusiasm in 2019. If anything, the partnership between driver and owners has only gotten stronger over the off-season which is certainly good news for Varin’s fans and rather unsettling news for his contemporaries.

“We’re looking at doing more of the same this season,” said Varin. “We’re going to run a handful of shows with the Sprint Car between the ESS [Empire Super Sprints] and the Patriot Sprint Tour. We’ll be running Fonda every Saturday night with the Modified to defend our title there and we’re going to keep our Sunday’s open for special shows and some of the more high-dollar paying races.”

To understand how you arrived at where you are, you must first look back at where you’ve been. With a career that has left little to be desired, Bobby Varin has had the off-season to reflect on his latest accomplishment and prepare himself for what happens next. Like any addict will tell you, if one is good than two must be a whole lot better. The same can be said for Bobby Varin in the sense that if seven titles are good, then eight must be a whole lot better.

“I hope we can get another track championship,” Varin concluded. “That’s going to be the ultimate goal and like I said, it means a lot to have my name mentioned with the greats at Fonda Speedway. To be in the same company as Jack Johnson, Lou Lazzaro and Dave Lape means a lot to me. I know I have the equipment to get the job done and more importantly I’m having a lot of fun racing for Alton and Carole. We’re on a pretty good roll right now and I definitely think that another title is possible.”

Varin kicks off his title defense on Saturday, April 20th at the historic Fonda Speedway in Fonda, N.Y. Racing is slated to start at 6:30 PM.