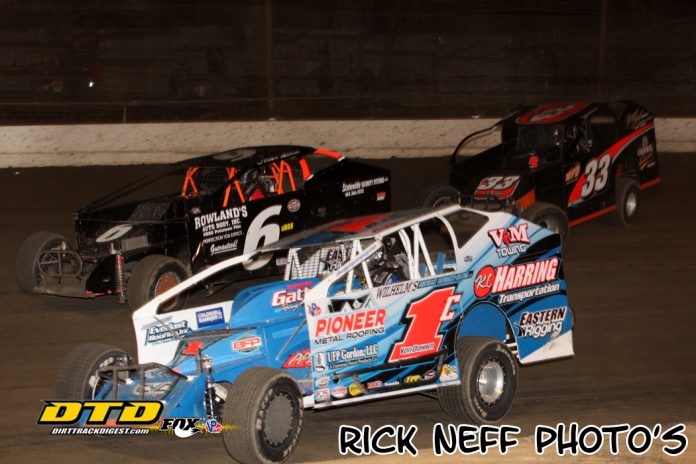 BECHTELSVILLE, PA – Even though the 57th season just started at Grandview Speedway, Craig Von Dohren and Brad Brightbill struggled in their respective divisions at the onset of the new campaign.

Saturday night at the 1/3-mile Berks Co. clay oval, crew chief Josh Bashore had Von Dohren’s car dialed in on the slippery surface as a result of heavy rains. The track crew is to be complimented on getting the track race ready after the downpours throughout Friday night and Saturday morning and late afternoon.

Von Dohren took advantage of the situation when race leader Tim Buckwalter went too high coming off turn three on the 15th lap to put the K.L. Harring Transportation/Nick Gatto powered No. 1C in the lead. He outdistanced himself from the others and went on to chalk up his first win of the year in the TP Trailers 358 NASCAR Modified feature.

The TP Trailers Truck Equipment 25-lap NASCAR Sportsman feature saw Brightbill overtake Ryan Beltz on the eighth lap to go on to score his first win of the year ending his four-year winless drought. His last win came on August 22, 2015.


Brett Peters and Curt Neiman were the winners in the 20-lap Blast From The Past feature. Peters won the modified class while Neiman took the small car feature win.

Modified action saw polesitter Buckwalter spring into the early lead and within no time he was gaining ground over the competition being chased by Clay Butler, John Willman and rookie racers Joe Funk III and Dylan Swinehart.

Lap 13 was an unlucky one for rookie racer Louden Reimert when he was sidelined with a right rear flat tire bringing out the caution. It was still Buckwalter in control, but now Butler, Von Dohren, Kevin Hirthler and Funk III composed the top five.

Buckwalter got into the loose marbles and before he could get the Saxton Motorsports mount composed Von Dohren and Willman got past him for first and second.

Once Von Dohren was in the lead it didn’t take him long to pull away trailed by Willman, Buckwalter, Hirthler and Butler.

The field never closed in on Von Dohren since no more cautions were needed and he pulled into victory lane for his 106th Saturday night career win. The biggest disappointment had to be for Willman. After taking the white flag he pulled into the infield on the backstretch out of competition. Hirthler went on to finish second followed by Buckwalter, Rick Laubach and last week’s feature winner Brett Kressley. Sixth through tenth were Butler, Frank Cozze, D. Swinehart, Briggs Danner and Jeff Strunk.

Beltz took the early lead from the pole in the Sportsman feature followed by Nathan Mohr, Brightbill, Kenny Bock and Andy Clemmer.

Brightbill motored into second on the second circuit to pressure Beltz for first.

Blake Reber spun in the fourth turn to bring out the caution with seven laps completed. On the restart Brightbill charged into first to become the new pacesetter.

With Brightbill now in control the battle behind him for the remaining positions was between Beltz, Bock, Mohr and rookie Kyle Smith.

Bock’s strong third place run ended when he came to a half along the homestretch on the 19th lap. Brightbill held his first place spot when action resumed, but now Beltz was sidelined with a flat tire, but he pulled off the track to avoid another caution.

Beltz, Mohr and Bock won the heats. The consi was won by Josh Adams.

The excitement of Sprint car racing combined with the T.P.Trailers Modifieds and T.P.Truck Equipment Sportsman will be the attraction next Saturday, April 27th. The Delaware Auto Exchange Mid-Atlantic Sprint Series 305 Sprinters will make their first appearance of the new season with Tom Carberry, Tim Tanner, Jeff Geiges, recent winner Bryant Davis and others expected to participate. Adult admission is $18 with youngsters under 12 admitted free. And there is free parking on the speedway grounds. The tripleheader racing action will have a 7 p.m. starting time.

The Blast from the Past Vintage racers join the Modifieds and Late Models on Saturday, May 4. It is important for fans to note that the starting time is moving to 7:30 p.m. for Saturday night events with this show.

Information on what is going on at Grandview Speedway can be found at www.grandviewspeedway.com, Facebook or telephone 610.754.7688.