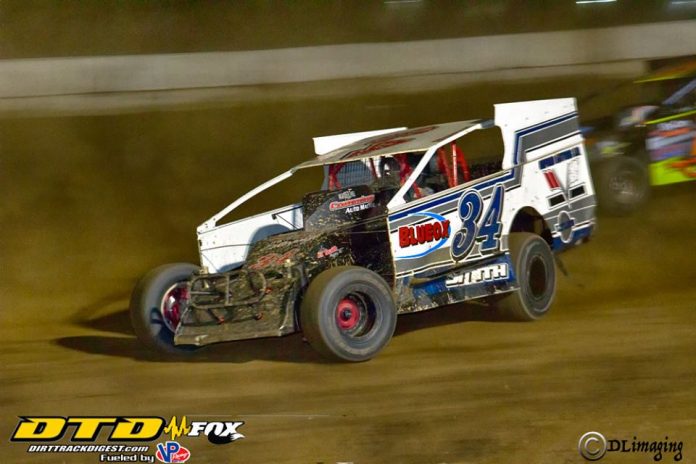 KIRKWOOD, NY – Incredibly successful night honoring the “Junkyard Jet”, Doug Worthing. A 46-lap modified feature was ran in his tribute paying $2,063 to win and over $1,700 in bonus money went to drivers all throughout the field. Doug is one of the 50 greatest racers of all time at the track with 46 feature wins, hence why the race was ran 46 laps. We had invaders such as big names like, Stewart Friesen, his wife Jessica, Pat Ward, ad Danny Johnson. Along with them we had many drivers from all over the state as all other tracks that had races scheduled had cancelled due to weather. The pits and stands were packed as we had 157 cars in the pits for a phenomenal night of racing.

The Doug Tribute 46-lap Sunoco Modified race was led to green by Butch Getz and Brett Tonkin. Lap 1 there was a big pile up on the backstretch, causing tempers to flare. Getz and Tonkin lead the field to the restart. Tonkin breaks lap 8 bring out the caution. Lap 12 Stewart Friesen takes the lead over Getz until lap 17 when Friesen’s rear end broke. Getz and Petrilak led the field to the green on the restart. Petrilak led the field until lap 43 when he slowed on the front stretch. Danny Johnson then claimed the lead until 2 laps later when his rear end broke. Rusty Smith ended up leading the last lap after starting 19thbecause he didn’t make it in through his heat and ended up having to run a consi. He took his number 34 BLUEOX machine to Victory Lane. Where he got to hold the big check for $2,063. Smith was followed by Getz, Gibbs, Malcolm, and Worthing.

The INSINGER Performancer Crate Sportsman’s were led to the green by Brandon Fritsch and Travis Green. Fritsch fell back a few spots after the green. Bringing Corey Cormier to second. Todd Titus then spins pulling out the caution on lap 2. Bringing Cormier and Green side by side on the restart. Where Cormier led the field the rest of the way through the caution filled race. Cormier was followed by Gary Smith, Travis Green, Tommy Collins, and Dustin Jordan.

The 600cc Modified’s were led to the green by Korey Inglin and Jared Green. Inglin led to almost the half way point until he broke. Bringing Jared Green to the lead. Green led the race the rest of the way. Matthew Warner was on his back bumper the last few laps but never got by him. Green was followed by Warner, Randal, Beebe, and Mills.

The Factory Stock race will be rain next weekend as they will now have a double header.

FACTORY STOCK FEATURE WILL BE RAN AT A LATER DATE.