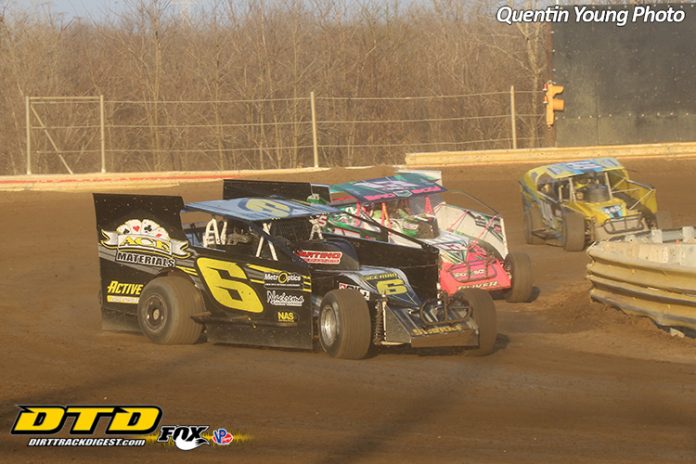 The 30-lap Vahlco Wheels Modified feature began with polesitter Brian Papiez bolting to the front with JR Fulper and Matt Stangle in tow. The top three remained in order until a pair of cautions took place on the sixth tour. When green flag racing returned, Stangle grabbed the lead with Papiez in second and Fulper in third. Mike Butler, who started the event in fourteenth, was continuing his march forward as he moved into fourth place on the eighth revolution. After an eleventh lap yellow flag for a slowing John McClelland, the ensuing restart was red flagged as Kevin Vaclavicek’s car flipped on the frontstretch and collected other competitors. Once action resumed, Stangle was still on top with Papiez in second with twelve laps completed. Sixteenth place starting Danny Bouc inched closer to the front as he passed Butler for third on the thirteenth tour. The yellow lights illuminated for the final time with eight laps to go for Fulper. As the green flag waved, Stangle held off Papiez to maintain his lead as Butler took third place from Bouc and eighteenth place starting Ryan Godown motoring into fifth. On the very next circuit, Bouc regained third from Butler. With five laps remaining, Stangle had developed a half straight away advantage over Papiez. Stangle went unchallenged the rest of the way to pick up his second career Modified feature win. Papiez’s strong run netted him the runner-up position. With Bouc finishing third, Butler was fourth and Godown was fifth. Brian Papiez, Matt Stangle and TJ Lilly claimed the Vahlco Modified heat races.

In the 20-lap Crate Modified feature, Eric Palmer catapulted to the front on the second circuit and remained on top to capture his ninth career victory. Second place went to Joseph Brown. George Gareis Jr. came from eighth place to finish in third. Ryan Heim and Aaron Weaver rounded out the top five. The Crate Modifieds heat races were won by Joseph Brown and Eric Palmer. Robby Dunn was the victor of the consolation contest.

After taking the lead from Paul Hartwig on the second circuit, Joe Garey Sr. went unchallenged to capture the 15-lap 4-Cylinder race. The runner-up spot was taken by Joe Garey Jr. Mike Fox was third. Fourth went to TJ Graves with Hartwig holding on to take fifth.

On Saturday, April 27 at New Egypt Speedway, Premio Sausage Night will present two 20-lap features for the Vahlco Modifieds. The Larry’s Hot Rods & Harley’s Northeast Wingless Sprint Cars, Hammer Sportsman, Street Stocks & Lyons Construction/Metal Fab Rookie Sportsman will be on the agenda as well. Competitors can begin to enter the pits at 3:00 p.m. with the spectator ticket window opening at 4:00 p.m. Hot laps get cranked up at 5:00 p.m. and the first green flag waves at 6:00 p.m. Admission to the grandstand is $25 for adults, $23 for seniors 65 and older, $15 for teens 12-15, $15 for military personal and their spouses with ID, and Kids 11 & under are FREE. Pit admission is $30 with a New Egypt Speedway license and $40 without.