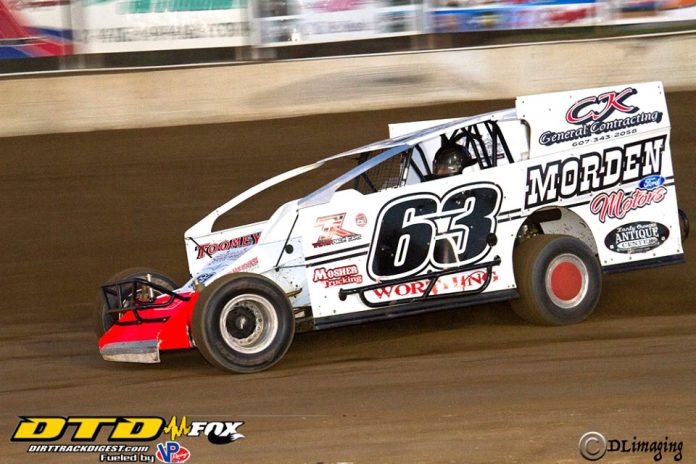 As many of the surrounding tracks in Northern New York canceled their events due to rain, all eyes focused on Five Mile Point, drawing teams from far and wide to challenge for the Worthing Tribute win. As the fans and teams filled into the legendary track, it became apparent that the track was running out of room to accommodate the influx of racers and fans to the point where the track infield was used to take up the slack.

An incredible 56 Mods answered the call for the tribute race, honoring Doug, “the junkyard jet” Worthing. Some of the biggest names in the sport made their presence known for the 46-lap race. With drivers like Stewart Friesen and his wife Jessica, Danny Johnson, Pat Ward, and Dan Creeden were all in the house to take on the local heroes like Rusty Smith, Brian Malcolm, and Joey Colsten. With all this talent in the pits fans were expecting an outstanding show and once the dust had settled the fans expectations rang true.


From the drop of the green flag, fans were treated to some of the best short track racing around and in the end, it was Oxford, New York’s Rusty Smith who raced his way to victory lane, outgunning the heavy hitting invaders. Rusty explained to the capacity crowd, “I am so honored to have won this race in memory of one of this tracks greatest drivers, Doug Worthing. This is definitely one of the highlight moments in my racing career.”

Rusty Smith was followed by Butch Getz in second, Mitch Gibbs in third Brain Malcolm in four and rounding out the top five, Byron Worthing — the son of Doug Worthing.

I asked Byron Worthing about his thoughts on the tribute race in honor of his father. “It was a great turnout and was very humbling to see all the support that my dad still gets after all these years. I’m so happy for the Harpells as they have been working their tails off to get Five Mile Point back in shape and it looks like it’s going to pay off for them. As for our team, we had a pretty decent run, so all in all a good night,” Byron explained. Fans were also treated with a heavy field of Crate Sportsman. With a field of 39 cars in the pits, they differently put on a great show for fans showing they were not going to be outdone by the Modifieds. In the end, Middletown, New York’s Corey Cormier fought his way to the front from mid-pack to win the Crate Sportsman 20-lap feature.

Yes, there was a bit of luck that fell into place to get this race in, but Tyler Harpell was ecstatic on how things worked out.

Tyler explained: “We began prepping the track back on Wednesday before we anticipated the possibility of rain on Friday. We got the grounds ready to accommodate the extra flow of fans and race teams for the Doug Worthing tribute race, but we never expected this.” Tyler went on to say: “I was up all hours of the night on Friday keeping an eye on the weather, but Mother Nature blessed us as the majority of the heavy rain passed us to the east and west. The biggest problem facing me at this time was keeping the track up to par. With the rain last weekend and the rain Friday, we were having a tough time getting the track into shape to what I wanted it to be, but we did our best under the circumstances.”

Overall, the Doug Worthing tribute race at Five Mile Point was one of those races you will not soon forget. Tyler, Tanner, and Tucker along with the crew at Five Mile Point worked their magic to give fans a race that will be talked about for years to come. Great success!