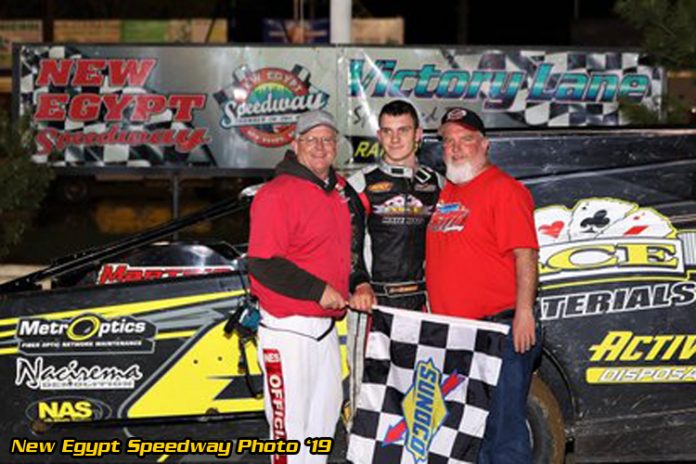 Matt Stangle was on top of the world Saturday night at New Egypt Speedway after winning the 30-lap Modified feature event. Stangle and good friend Brian Papiez battled hard on a very heavy and fast track for most of the race as the crowd cheered. Stangle was finally able to take the lead on a restart and then was able to hold off a determined Papiez to take the checkered flag.

For Stangle, it was his second career win in the Modifieds. Unfortunately, that is not where this story ends. Almost 48 hours after Stangle stood in victory lane having his picture taken with his joyous crew and family the win was stripped away due to a rule’s infraction found in post-race technical inspection. With Stangle’s disqualification, the win was awarded to Papiez.

Obviously a disappointed Stangle had a lot to say when DirtTrackDigest.com contacted him by phone on Tuesday to get his take on what went down the past few days after Saturday night.

“When we got to tech they took a fuel sample and the fuel passed all the tests, ” said Stangle.  “Then they saw the collar on the rear.  Everyone that was there and anyone that knows the true story knows that it had nothing to do with me winning and it didn’t have an impact at all. They were saying stuff about the fuel, but the rule states that it has to pass the water test because it’s alcohol and it passed the test.  The only thing they said was that it smelled funny so they were gonna send it out, but I got DQ’d before they even sent it out. I’m just tired of it.  You work so hard to get to the track and when you finally do good, it’s always something. Then there’s other drivers, when they win, they’re through tech in a minute. They don’t get checked and if they do there’s a blind eye. If it was anyone else they would’ve said with the collar to not come back with-it next week.”


As disappointed and upset Stangle was with the disqualification, he was more upset with the timing of it and how it was he found out about it.

“The thing is, if they were going to DQ me they should’ve done it that night,” explained Stangle.  “They shouldn’t have sent me back to my trailer and told me I was ok.  They actually didn’t even call me to tell me I got DQ’d. I got a text Monday morning from Matt Hearn at TEO asking if it was true I was DQ’d. I said what do you mean, I hadn’t heard anything. He said he heard from someone else that Grosso was telling everyone that it was official that I had been DQ’d. So I texted Brandon (Grosso) and he told me yeah, it was official.  My dad told me that Mark Blackwell told him that we got DQ’d. My dad then called Joey to and he said what’s this, everyone’s saying that we were DQ’d. Joey said I feel terrible, but we were going to have to DQ you. They still haven’t said actually why.  In the article it just said we failed post-race tech.”

Obviously the team is upset and will now weigh their options of where to race on Saturday night going forward in 2019.

“I don’t know, I’m not going back there,” said an exasperated Stangle. “There’s plenty of other tracks I can race at. I don’t need to go there and race against favoritism.  It’s hard enough to race every night against 23 other guys, yet you’re racing against the officials when you go there. I’ll go back there for the special races like the Deyo race and the big money races, but we won’t be there every week. We’ll probably go to Bridgeport or Orange County. My dad won’t be there this week so I’m either going to go myself to Orange County or I might even go up to Fonda.  I don’t know yet.”

Matt’s car owner, father and former New Egypt racer John Stangle was obviously not very happy with the track’s decision and was more upset with what he believes is a conflict of interest with track parts supplier Mark Blackwell who is also very involved with the No. 32 of Brandon Grosso.

“To say I am mad is an understatement,” said an obviously angered John Stangle. “How do we race against a car that is housed at Mark’s shop, worked on by Mark and who also sits in and writes the rules? Does this make sense? He tells them what to check on the car and the puppets listen. Is it me or is this messed up?”

I contacted Joey Liquori, Manager of New Egypt Speedway, to get the track’s perspective on the situation and what the track found on Stangle’s car that didn’t meet the track’s rule book.

“It’s a real shame that this had to happen,” explained Liquori.  “We had a nice event on Saturday and it would be nice to just be able to look forward to putting on the next race.

“Something like this is not good for me and definitely not good for New Egypt Speedway. I meet with my guys (teams) every year.  Last year one of their biggest complaints was tech. They wanted tech, so this year I told them if you want tech, you’re going to get it. So every week I have Wayne, who is one of my managers, go down there with a different list of stuff we want to check. Not even my tech inspectors know what it is from week to week. We automatically tech the top three cars.  This week it was Stangle (winner), Papiez (2nd place) and (Danny) Bouc (3rd place). Papiez and Bouc passed tech and when we checked Stangle’s car he had collars in the rear and inserts. Did it help him win the race?  Absolutely not.  Those are for slick tracks and Saturday’s track was heavy due to all the rain we had on Friday but nobody else had them and everybody else saw them.”

The New Egypt rule book states: Rule #11 No inserts made of any material allowed to be slid inside of the tube to act as ballast.

“I copied the DIRT rules last year and basically mirrored their rules for the suspension for us because DIRT had found different weights and ballasts on tubes at different times,” said Liquori. “Look, I tried everything possible to research this. John is my friend and I didn’t want to DQ him and it bothers me that I had to, but what do I tell the other 23 guys who are legal and to the other two guys sitting in tech that are legal. I can’t say oh well, he was illegal this week, but we told him not to do it again next week. I just can’t do that. Believe me, I talked to different people before we made this decision and if we don’t make it we have no credibility with the other racers.”

Another item that came to light in the tech process was the fuel. The fuel, which the track requires the teams to purchase directly from them, passed the required water test in tech. However, it was determined that the fuel had a funny smell to it and needed to be looked into further.

“We sent the fuel out to Sunoco to be checked,” mentioned Liquori. “We send the fuel from the top three guys out every week to be checked. The fuel did have a funny smell to it but I want to make it clear he wasn’t DQ’d because of the fuel right now. He was DQ’d because of the collar in the rear.  We have to wait to hear from Sunoco to see what happens there. The other two guys had their fuel checked and and it looked and smelled just like fuel that came out of the pump. His fuel looked different and smelled different. So we’ll see what happens with that when we hear back from Sunoco.”

When asked about the allegations of the conflict of interest that John Stangle was referring with Mark Blackwell, Liquori had this to say.

“Blackwell is part of our rules committee so when we write the rules up Blackwell is there, but Mark was not in tech on Saturday night when this happened and had nothing to do with this disqualification. They broke the rule and that was that. They admitted that there was something there that weighed four or five pounds. They had it, nobody else had it, well at least the other two guys in tech didn’t have it. This hurt.  John is a friend and I hate to have to do this, but they broke the rules. Take your punishment and come back.  Like I said before, I don’t think it was the reason that Matt won, but it’s in the rules. “

For the young up and coming driver Papiez it was his first career win in the Modified division, but it was also a little bittersweet due to the way the win came about.

“I really feel bad for Matt (Stangle), he is one of my good buddies,” explained Papiez. “It really just sucks for those guys. I really don’t have too much to say about it. I understand where they’re coming from and I understand where the track’s coming from as well. It just stinks that I am in second and now I get the win.  I don’t know if that makes me look bad or not. It is definitely not the way I wanted to get my first win that’s for sure. I feel that my car is very fast and that I am in a lot better position now that I was in at any point last year to get a win. I could have just as easily won that race instead of Matt.  It was just a matter of who got the jump on the restarts. I thought I had him there on that one restart but then they called it back after I thought we completed the lap. I’m not sure what they were thinking there because we all had crossed the start/finish line before the red came out, but I’m told they will fix that going forward.”