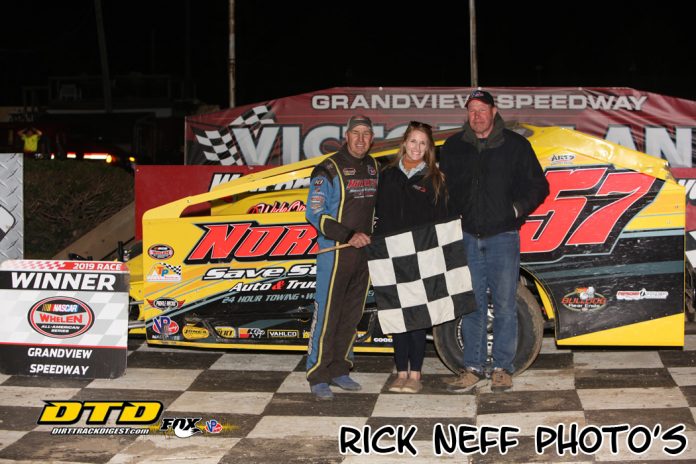 BECHTELSVILLE, PA – The air was brisk and cool on Saturday night at Grandview Speedway, but racing action was hot and heavy for the NASCAR Modifieds and Sportsman along with the Mid-Atlantic Sprint Series racers on the 1/3-mile banked-clay oval.

Five-time track Modified point champion Duane Howard put the Norm Hansell-owned No. 357 at the head of the pack on the 23rd lap of the 30-lap TP Trailers NASCAR 358 Modified feature and went on to capture his 73rd Saturday night career win and first of the season.

In the TP Truck Equipment 25-lap Sportsman NASCAR feature, Brandon Edgar claimed his first ever victory in the division.

The MASS feature originally scheduled to go the distance of 25-laps was cut down to 15-laps by the Sprint officials due to the excessive amount of red flag periods. In the end it was Tim Tanner Jr. taking home the win.

Close to 100 racers took part in the Saturday night events.


Rookie racer Richie Hitzler put the Joe “Geezer” Fanelli-owned No. 22 into the early lead before the red was thrown for a multi-car accident along the homestretch extending to the first turn. Cars in the front of the pack got crossed up sending the cars behind then every direction to avoid contact but was unavoidable. Frank Cozze and Brett Kressley rolled their cars as a result. Cozze made a quick pit stop and returned, but Kressley’s car sustained severe damage and he was through for the night. Also eliminated were Mike Lisowski, Frank Yankowski, Jeff Strunk and Doug Manmiller. All drivers were uninjured. When racing went back to green flag action Jordan Henn grabbed first trailed by rookie racers Louden Reimert, Alex Yankowski and Hitzler along with Tim Buckwalter.

By the 14th lap a blanket could have been thrown over the top four that now consisted of Henn, Yankowski, Reimert and Howard while Buckwalter tried to reel them in.

After a side-by-side battle brewed between Henn and Yankowski, on the 18th circuit Yankowski emerged as the new pacesetter with Howard overtaking second at the same time.

Yankowski ran the high line while Howard stuck to the inside groove trying to duck under him for the top spot.

This back and forth duel continued for five laps before Howard gained control of the lead.

Once Howard took over first he never looked back until he motored into victory lane for the win. Following Howard across the line were Yankowski, Reimert, Henn and Rick Laubach. Buckwalter, Craig Whitmoyer, Craig Von Dohren, Kyle Weiss and Hitzler completed the top ten.

Derrick Smith set the pace for one lap in the Sportsman feature before rookie Parker Guldin, who was a spectator for the feature last week after mechanical issues sidelined prior to the start of the feature, overtook first on the second circuit.

Guldin showed the way until Edgar charged into first on the fifth lap.

The yellow came out on the sixth lap when Smith and Jack Butler made contact on the backstretch. Edgar held his own when racing resumed, but now Beltz held down second putting his bids in for the lead.

Despite minor incidents that brought out the yellow, once Edgar had the lead he never relinquished the top spot and continued until he pulled into victory lane being chased by Beltz, Brad Grim, Brad Arnold and Brad Brightbill, last week’s feature winner. Rounding out the top ten were Mark Kemmerer, Brian Hirthler, Kenny Bock, Kyle Lilick and Guldin who received an extra $100 for being the first crate engine to cross the line.

Heats were won by Edgar, Beltz and Brightbill. All cars qualified in the consi so the win was credited to Darren Cox.

Providing they met the necessary requirements, the Modified and Sportsman feature winner got monetary awards from TP Trailers and a certificate from VP Fuels for product awards. Henn and Edgar got the Dan’s Deli ½-way hoagie awards.

Before the first lap could be recorded in the Sprint feature the red was out for a major accident along the homestretch. All drivers were okay. Joe Kay was the leader after things were cleared.

Just after Tanner Jr. took the lead on the third lap the red was thrown again for another multi-car incident. It was still Tanner Jr. ahead on the restart followed by Kay, Keith Prutzman, Larry McVay and Logan Diehl.

The next red was when McVay, running third at the time, ended up in the catch fence between the third and fourth turn. After that incident, the race was shortened to 15 laps. Tanner Jr. remained the leader with Diehl second.

Tanner Jr. never relinquished first to cop the win in the event trailed by John Haegele, Dave Brown and Kay.

Another tripleheader show of stock car racing will be the attraction on Saturday, May 4 at 7:30 p.m. (Please note new starting time). Featured will be the T.P.Trailers NASCAR 358 Modifieds and T.P.Truck Equipment Sportsman along with the Blast from the Past Vintage Racers. Spectator gates open at 5:30 p.m. with racing at 7:30 p.m. Adult admission is just $15 while youngsters under 12 are admitted FREE. Pit admission is $30.