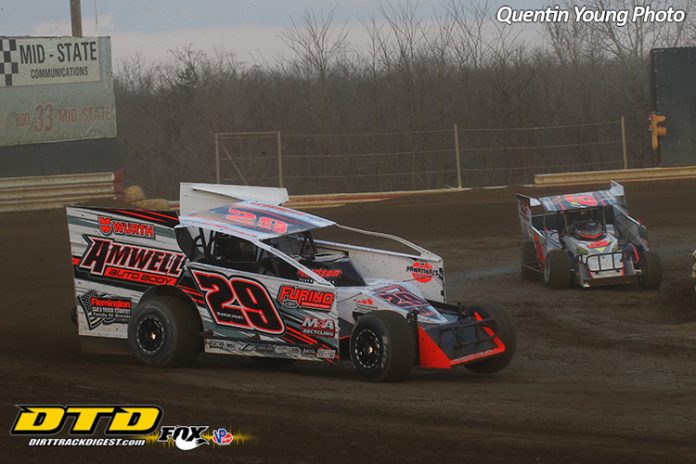 After the original start of the first 20-lap feature for the Vahlco Wheels Modifieds was scrubbed due to a caution, Blaine Bracelin took the lead on the ensuing green flag with Pat Wall and JR Fulper next in line. Tenth place starter Ryan Krachun was quickly on the move and motored into fourth on the second revolution. The caution lights were illuminated on the fourth circuit. When action resumed, Krachun drove from fourth into first with Bracelin in second and Fulper in third. Pat Wall scooted past Fulper for third on lap six. Leading the field, Krachun began to pull away as the remainder of the top five spots began to shuffle. At the halfway point, Krachun had a comfortable edge over Wall, thirteenth place starter Billy Pauch Jr., eighteenth place starter David VanHorn and twelfth place starter Danny Bouc. With Krachun continuing to set a fast pace, VanHorn was persistent in moving forward and advanced into second with only six tours left. One lap later, Krachun began to encounter slower traffic. Throughout the final five circuits, Krachun’s large advantage decreased but he went unchallenged to record his fourth career win. With VanHorn taking second, Pauch Jr. finished third. Fourth went to Wall and fifth was taken by Bouc.

With the top thirteen from the first Vahlco Wheels Modified feature inverted for the second 20-lap affair, outside pole sitter Ryan Godown darted to the front with Matt Stangle and Brandon Grosso in tow. On lap four, Billy Pauch Jr. brought out the first yellow flag of the race for a flat tire. On the resumption of racing, Godown maintained his lead with Grosso moving into second. Following another caution period, Godown, Grosso and Danny Bouc were running in the top three positions with six laps recorded. On the eighth circuit, Godown repelled a strong challenge by Grosso to keep his advantage. By lap ten and after one additional caution, Godown was still in front with Bouc slipping by Grosso for second. Two tours later and following a restart, Grosso returned to the runner-up spot with Mike Butler driving past Bouc as well to take third. Following two more appearances of the caution flag and with five laps left, the lead was in Godown’s control with Grosso, Butler, and David VanHorn in his tracks. Godown went unchallenged in the final tours to record his second win of the year. Grosso finished in the runner-up spot with third going to Butler. VanHorn came home in fourth. After his fourth lap visit to the pits to get a new tire, Pauch Jr. drove back through the field to take fifth. The Vahlco Wheels Modified heats were taken by Danny Bouc, Billy Pauch Jr. and PJ Oliver. Davey Sammons won the consolation contest.

In the 20-lap Hammer Sportsman feature, Will Dupree held off Bob Lineman Jr. on a final lap restart to record his third career victory. Jason Kosch paced his rivals for the opening two tours before Dupree hopped into the lead. With Lineman Jr. placing second, David Burns finished in third after starting the contest in ninth. Brad Roberts was fourth and twelfth place starting Steve Davis was fifth. Ryan Heim and Will Dupree were the victors in the heat races for the Hammer Sportsman.

For the second week in a row, Anthony Tramontana Jr. triumphed in the 8-lap Lyons Construction/Metal Fab Rookie Sportsman race. Tramontana Jr., who started in fifth place, took the lead from DJ Hunt on lap two and headed the field the rest of the way. With Hunt completing the race in second, Ryan Godown Jr. was third. In the battle for fourth place, Vinny Troia outdueled Ryan Krushinski.

On Saturday, May 4, Little League Night swings into New Egypt Speedway as Little League players in uniform are admitted for free to the grandstand. On the track, the Delaware Auto Exchange Mid-Atlantic Sprint Series makes their second appearance of the season. The Vahlco Wheels Modifieds, Crate Modifieds, 4-Cylinders and the Lyons Construction/Metal Fab Rookie Sportsman complete the racing docket. The pit gates unlock at 3:00 p.m. and the spectator turnstiles open at 4:00 p.m. Hot laps get underway at 5:00 p.m. with racing beginning at 6:00 p.m. Admission to the grandstand is $20 for adults, $18 for seniors 65 and older, $10 for teens 12-15, $10 for military personal and their spouses with ID, and Kids 11 & under are FREE. Pit admission is $30 with a New Egypt Speedway license and $40 without.