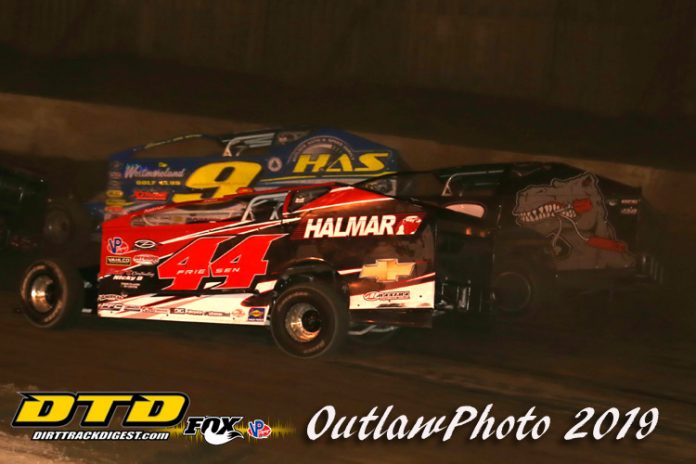 FONDA, NY- Nothing in racing is ever guaranteed.

For the better part of the past decade, whenever Stewart Friesen rolled has through the pit gate at the historic Fonda Speedway it was almost always assumed that he would pass through it at the end of the night with both a trophy, and the winner’s share of the spoils.
Saturday night the famed Montgomery County oval roared back to life under the new managerial team of Brett Deyo and it seemed that Friesen would again plant his flag in victory lane at the end of the 30-lap contest. As one can guess, looks are more often than not deceiving.

With the opening laps of the feature event marred by caution after seemingly endless caution, Friesen quickly worked his way to the front from his eighth place starting position on the grid and chased down race leader Matt DeLorenzo, claiming the top spot by the end of the 18th circuit with a power move around the outside at the exit of turn four. On any other night, the end result never would have been in question; enter Waterloo, N.Y. native Matt Sheppard.

Sheppard, who fired from the 11th starting position at the initial drop of head starter Joe Kriss’ green flag, began to reel in the four-time Modified track champion and by lap-27, the driver of the now famous No. 9s found himself alongside Friesen heading down the backstretch of the Fonda oval.


What should have been a battle between two drivers took an interesting turn heading into the third corner as Sheppard went low beneath the No. 24 of Elmo Reckner while Friesen went high. Sheppard came out on top while Friesen was momentarily held up by the now lapped car of Reckner and when the duo exited turn four, the former showed his frustration to the latter which resulted in a late-race caution.

Sheppard maintained the lead on the restart and held off Friesen to claim victory in the 30-lap, $8,000-to-win affair. Matt DeLorenzo, Bobby Varin and Dave Constantino rounded out the top-five.

For Sheppard – who admittedly hasn’t always been a fan of the Fonda Speedway – the large payday made up for all of the times he has been spurned in the past by the ‘Track of Champions.’

“We made a lot of good adjustments after the heat race,” explained Sheppard. “We were bad in the heat. The car was really unbalanced and really unruly so we changed a bunch of things and made it a whole lot better and we were able to drive up through the field and pass some cars when we really needed to.”

Though Friesen made it to the front rather quickly, Sheppard kept his head down and maintained his rhythm when it counted the most rather than becoming discouraged and over-driving in an effort to close the gap to the front-runners. His coolness under pressure as the feature drew to a close certainly proved to be a deciding factor in the final outcome.

“I didn’t get discouraged when Stew got to the front,” Sheppard continued. “I realized that the car wasn’t too bad and then we got by Matty [Matt DeLorenzo] Stew couldn’t really get away from me and I started catching him and then opportunity arose when he picked the outside of the lapped car and I picked the inside. I got a good run through there and I was able to pull it off.”

Though Friesen’s win record and reputation at Fonda speak from themselves, Sheppard knows better than most how difficult it is to grab a win from him at a place that he has quickly become synonymous with since 2011.

“I was just impressed that I could keep up with him,” Sheppard said with a laugh. “I knew he’d be awfully tough, but once we started catching him a little bit, all you can hope for is exactly what happened. Luckily for us, things went our way and not his tonight.”

Though Sheppard made it past Friesen with only a handful of circuits remaining, the late-race caution on lap-27 added more than just a small amount of pressure on the ensuing restart.

“I knew he was going to be tough,” he continued. “I was in a really good rhythm before the caution and I didn’t really want to see it to be honest. Those damn mud puddles on the bottom were tough. I hit the one in turn one and pushed up the track and then I did the same thing coming off of turn-four on the last lap and spun the tires. The finish was probably a lot closer than it should have been.”

Though the early-season conditions certainly added a new matrix to an already challenging speedway, Sheppard was still quick to praise the changes made as the 2019 season officially got underway.

“I’ve certainly seen the track a lot worse,” concluded Sheppard. “It was a big improvement over what we’ve seen in the past. Aside from the Modified feature being a marathon, the show ran through pretty quick and the track was in good condition for opening day especially given the weather conditions we’ve been having. They did a great job tonight.”

Where one driver found elation on opening night at the Fonda Speedway, another found vexation. After nearly capturing another victory at his adopted home, Stewart Friesen found himself relegated to a second-place finish that left little to be desired at night’s end.

“I love racing and competing at Fonda,” stated Friesen.  “I’m still disappointed in Bill and the 24 guys for giving Elmo Reckner another opportunity to be on the racetrack. He simply doesn’t deserve it.”

The word disappointment doesn’t even come close to conveying Friesen’s emotions after the modified feature on Saturday night both in the actions of fellow competitor Elmo Reckner and in the conditions of the speedway surface for the entirety of the evening.

“Brett [Deyo] has to wise up though,” Friesen continued. “These water puddles have been destroying race cars here forever and I warned him about them all winter long and they destroyed race cars again all night tonight. I don’t know who’s in charge of that and I don’t know what the answer is but something needs to be done; something needs to change.”

It wasn’t all bad for the driver of the No. 44 Halmar sponsored entry as he did take note of the positives that were prevalent more so this season than in season’s past.

“I’m glad that Fonda had a good show though,” concluded Friesen. “I’m glad that Brett [Deyo] got this damn thing in. Most promoters would have cancelled and I’m glad the show was well supported even though it’s freezing cold. I’m happy to see the support and I love this place; we’ll definitely be back.”