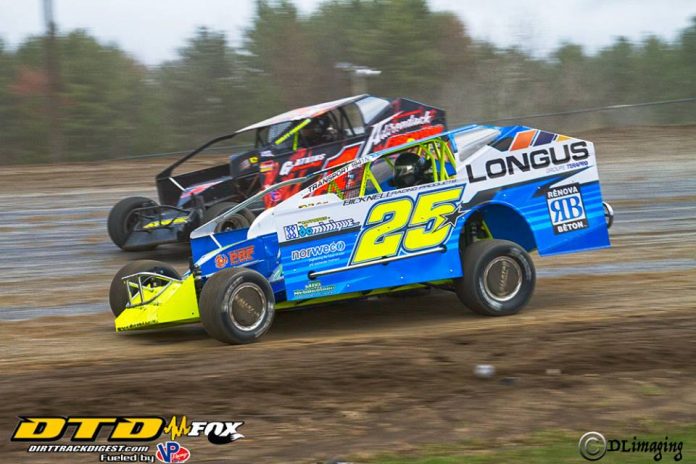 Lance Willix and Jackie Brown led the 21-car field to the green, with Willix taking the early advantage. A couple of cautions slowed the event early, bunching up the field, but Willix was strong to the challenge.

Defending 2018 Egglefield Brother’s Ford 358 Modified champion Steve Bernier worked his way up to second by lap 20 and was trying to take the lead on the outside lane to get around Willix at the halfway point.

Both drivers would wage in a battle through lap traffic, trading the lead twice until lap 42. That’s where Bernier made the pass, and took off en route to his first win of the 2019 season.

Willix would come across the line in second, Michael Parent would finish third, Greg Atkins fourth, and Jackie Brown fifth.


2017 Poirer’s True Value Sportsman champion Connor Cleveland used his fourth starting spot to his advantage, taking the lead by turn two, and not looking back en route to the win in the 30 lap feature event.

While Cleveland was out at the front, a number of cars were battling for position behind him. Quebec racers Patrick Picotin, and Kevan Poliquin ran strong in the early portion event.

Defending champion Nick Heywood, Bucko Branham, and Adam Pierson, who came from deep in the field, were all factors in racing for a top position throughout the event.

After a number of battles and a late race pass, it would be Heywood crossing the line second, Pierson third, Picotin fourth, and Poliquin fifth.

Beuchamp used his pole position to take the early race lead and held it through the first 12 laps.

St. Helen Quebec’s Jocelyn Roy was coming on strong on the outside and made a bid for the lead. The two drivers ran side by side for a number of laps before Beauchamp would win the event by about a car length.

Mckiernan and defending champion Brent Jarvis went side by side for the first half of the event, before the 32 machine started to fade. The Moriah Center driver would go untouched through the rest of event.

Jarvis would finish second but would be penalized two positions. Tylor Terry would be scored second, Michael Wright would finish third, Jarvis fourth, and Shawn Duquette rounding out the top five.

Matt Leonard would have no trouble in the Chris Frennier Motorsports Strictly Stocks,
leading throughout most of event for his first win of the season.

Leonard would also pick up the 2 to go bonus from Chris Frennier motorsports.

Plattsburgh Airborne Speedway promoter Robby Knowles was pleased with the turnout for the event.

“A big tip of the cap to Josh Laware and his track prep team, said Knowles.

He added, “We want to thank all the fans, racers, crews and staff that braved the weather. We look forward to an exciting season with a great group.”

The Plattsburgh Airborne Speedway will be back in action next Saturday, May fourth, with the Dirtcar Sportsman series making its first of two stops. Post Time is scheduled for six p.m..