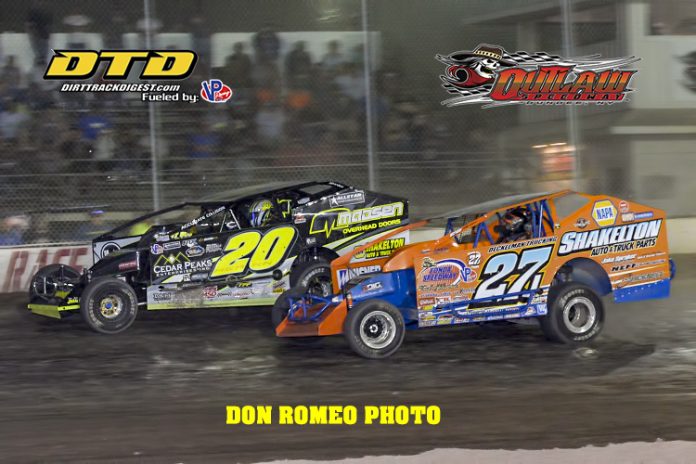 DUNDEE, NY – For the third consecutive year, the Outlaw Speedway is proud to host the Super Dirtcar Big Block Modified Series as they will make their only appearance at the Yates County oval on Tuesday, May 7, 2019.

All the top drivers that follow the famed Super Dirtcar Big Block Modified Series will converge on Outlaw Speedway for the high dollar event which promises to be one of the best Modified events to be staged at the track in 2019.

The 2017 event was won by the “Franklin Flyer” Billy Decker over Sheppard in an absolute thriller. Decker began his Modified career some 30 years ago at Outlaw Speedway, then known as Dundee Speedway in the Small Block Modified Division and now he is back onboard with the famed Gypsum Express operation. Decker will look to make it two wins in the past three years in the 100 lap event.

Last year it was Brett Hearn taking advantage of late race mechanical problems by then race leader, Stewart Friesen to pick up a very popular win at the Yates County Speedway plant. For “Brett the Jet” it had been some two decades since his last win at Outlaw Speedway having captured a 100 lap, 358 Modified win while competing in a Dirt Motorsports series event at the track


Dubbed as “The Ultimate Outlaw 100”, the century long grind around the 4/10 of a mile banked oval will definitely test man, machine and pit crews as the changing track conditions during the event will certainly require everyone’s undivided attention when preparing for the feature.

Also on the card it will be event #2 in the continuing Outlaw Speedway Sunrise Insulation American Racer Tire Sportsman Series for 2019, Last year Dave Marcuccilli was the man to beat as he as picked up 5 of the 6 events in the race series and ultimately claimed the overall series title. Kevin Root nailed series event #1 to kick off the “19” campaign during the Dutch Hoag Memorial make-up on April 13. Root will have his hands full on May 7 as such Outlaw Speedway regulars like Karl Comfort, Chris Fisher, Dale Welty, Tommy Collins Jr., Brandon Butler, Stacy Jackson and Brian Fish among others have thrown their hats into the ring to win the series event #2.

The classy Stan’s No Tubes Street Stocks will be on the card for the night as many of Outlaw Speedway’s top competitors such as Glen Whritenour, Quinn Sutherland, Carl Cleveland, Jared Hill, and Dave Matwiejow will all be looking for victory lane.

Also tapped to see action on May 7 will be the 4 Cylinders as well as the Marion Decker Insurance Hobby Stock Divisions.

All gate and start times as well as ticket prices for both pit and main grandstand entry can be found on the track Facebook account by going to www.facebook.com/OutlawSpeedwayLLC/.

Free rides around the facility on the Outlaw Speedway Monster Truck, “Outlaw Crusher” begin when the main grandstand seating area opens and as always fans are encouraged to bring along their campers which can be parked absolutely free.

Another mouthwatering chicken and rib bbq will be available when the main gates swing open.

For any additional information regarding the track, contacts, directions, rules, point standings as well as the complete 2019 schedule of events just log on at www.outlawspeedwayllc.com.
Information relevant to the touring Super Dirtcar Big Block Modified Series including their complete 2019 schedule of events, current series point standings, driver listings as well as all rules please go to www.superdirtcarseries.com.