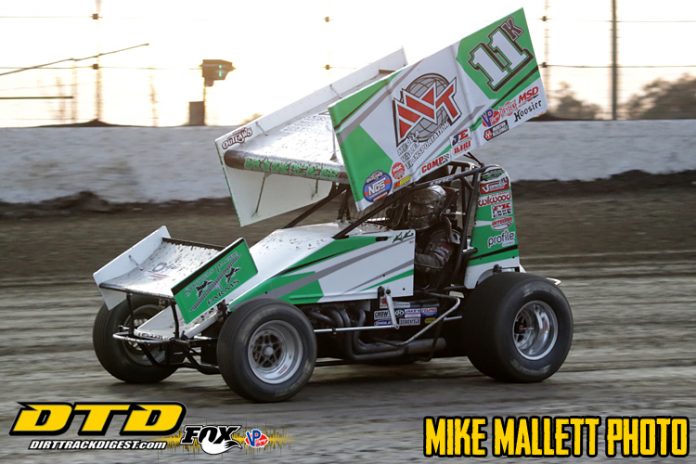 WEST MEMPHIS, AR – An unexpected one-off race appearance for Kraig Kinser’s crew chief may have played a part in the team’s recent string of constructive finishes.

Before Kinser’s crew chief Mike Kuemper ran the team’s back-up car at Arizona Speedway in April, Kinser had missed a Feature and finished no better than 15th. After, he scored two top-10s in a row – one a top-five finish – went Quick Time, won a DIRTVision Fast Pass Dash and led laps at Devil’s Bowl Speedway.

Kuemper – who has experience racing with the World of Outlaws – only ran five laps of the Feature at Arizona Speedway, but he said it was enough to gather newfound knowledge that could help Kinser.

“I learned some stuff in the way the car is driving and handling a little bit, trying to get it better for him with me being in it for those short amount of laps,” Kuemper said. “It helped out, because I went back to his car and did a little bit to his.”

What he deduced was their shock package needed to be adjusted and some bars of the chassis needed to be changed around.

“After we got done running that (race at Arizona Speedway), we changed the car around,” Kuemper said.

Their string of good finishes has currently propelled Kinser into the top-10 in points – 132 points behind ninth-place Sheldon Haudenschild.

He and Kinser are looking to continue their recent run of positive finishes into the doubleheader race weekend Friday, May 3, at Riverside International Speedway in West Memphis, Ark. and Saturday, May 4, at Tri-State Speedway in Kinser’s home state of Indiana.

“I love getting back home, running close to family,” said Kinser, of Bloomington, Ind. “We don’t get too many chances in Indiana so try to make those count. Then, West Memphis, just looking forward to the whole weekend.”

Both tracks are quarter-mile speedways, but produced varying results for Kinser last year. He found the top-10 at Riverside International Speedway, while finishing 15th at Tri-State Speedway – a track Kinser acknowledged he is usually “hit or miss” at.

Even though the Arkansas track favored him last year, Kinser has his eye on racing back home in front of friends and family.

“Being from southern Indiana, my family’s been to Haubstadt for a long, long time,” Kinser said. “I grew up watching and racing there. Got to see a lot of good non-wing races, a lot of good winged races there, too. It’s a good track not too far from home.”

His father, 20-time World of Outlaws champion Steve Kinser, won at Tri-State Speedway seven times. Kraig Kinser is still looking for his first victory at the speedway – and his first since 2017. So, a home state win at the Haubstadt, Ind. Speedway would definitely be mean a lot to him, he said.

In general, he, Kuemper and the Steve Kinser Racing team are looking to just keep their streak of good finishes rolling into doubleheader races.

“We’re trying to take the positives into that weekend,” Kinser said. “We’re hoping for the best and doing what we can do.”

Kuemper said the teams has been putting a lot of work into the car, which has been showcased by the team’s finishes the past couple of weeks. He said they just need to keep that going.

WHEN & WHERE
Friday, May 3, at Riverside International Speedway in West Memphis, Ark.
-Grandstand gates are scheduled to open at 5 p.m. with Hot Laps at 6 p.m. and Racing at 7:30 p.m.

ABOUT THE TRACK
Riverside International Speedway is a quarter-mile, high-banked track. The track record is 11.060 sec. set by Jason Solwold on May 5, 2007.
Online – RiversideInternationalSpeedway.com
Phone – (901) 840-1970

1/4-mile winners
There has been one race on a 1/4-mile track so far this year. Carson Macedo won at Silver Dollar Speedway on March 15.