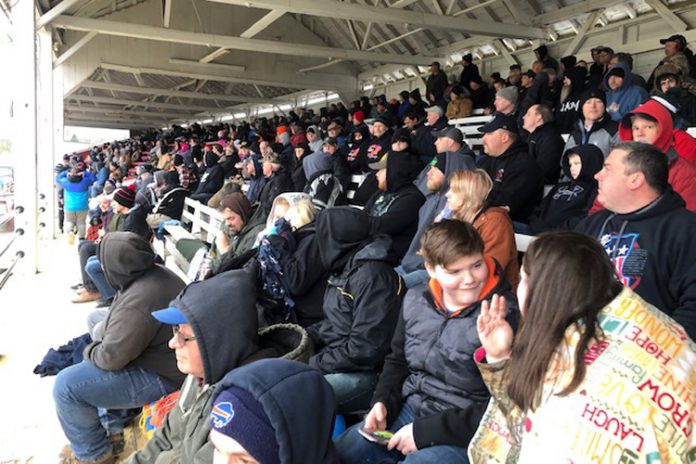 We finally got some racing in on Saturday at Fonda although we didn’t expect it to happen given the weather we had on and off all day. On Saturday morning we attended a graveside service for veteran driver, Mike Ehring in Troy. It was as expected a very well attended event because as anyone who knew him can attest to Mike was a very well liked person. After the service everyone went to a brunch at Franklin Terrace, in Mike’s honor.

Ed’s brother Rich was just one of the many Lebanon Valley, Mike Ehring fans and when Mike was inducted into the N.Y.S.S.C.A. Hall of Fame in 1997, Rich wrote a poem to document Mike’s first win on the high banks. He presented it to Mike that night and on Saturday he presented a copy to Mike’s granddaughter, Amber. Saturday’s event was truly something that Mike Ehring would have enjoyed and appreciated.

After brunch we headed home to rest up before, what we knew would be a cold night at Fonda; still with our eye on the weather, but we received a call from our daughter who was in the Fonda area and she said the sun was shining, so we proceeded to get ready for the season opener and some cold weather. The beginning of the Brett Deyo era at Fonda was cold but nothing we weren’t prepared for and we were not alone. Our first stop was the museum, a popular spot on Saturday, probably because of the windy conditions. The pits were brimming with cars and the stands began to fill up as race time closed in. The covered grandstand was near capacity as the night progressed and you would think, because of the very cold night, it was predominately the die hard fans but not so. We took this shot of Kid’s Club winners, Donovan Sweet and Taylor Gruet with Kid’s Club coordinator, Ashley Abeling. Donovan and Taylor were at the races at Fonda for the first time and plan on coming often this season.

Another familiar face was Tim Healey, Village of Fonda Trustee and Deputy Mayor and former safety crew member at Fonda for many years. Tim welcomed the crowd to the track and enjoyed the racing from the announcer tower.

The announcing team at Fonda this season consists of Paul Szmal, Jay Severson and Melissa Lazzaro who with the information received from track management and Ron Szczerba did a fantastic job all night long. There are many new sponsors at the track this season and the team knows the importance of making sure the fans know them. Ron Szczerba the track statistician does an amazing job of compiling stats for the “Track of Champions”. The track has so much racing history and Ron’s job becomes more and more important as we enter a new era of the historic oval. This season Ron went above and beyond and put all the information in a binder for each member of the team. Besides being statistician, Ron also does the quick results and race stories for the track. There were also some new racers at Fonda on Saturday. One we got a shot of was Brett Mortensen in the Limited Sportsman No. 1B this season, the first time as a regular. Brett is Mark’s brother and has been part of the crew. This year Brett decided to branch out and run his own car leaving Mark with a crew deficit. Brett and Mark raced go-karts together as kids and Brett currently does ice racing in the winter so Saturday night’s temperatures probably didn’t effect him at all.

Everyone at Fonda was anticipating the Modified feature and they weren’t disappointed. Although it got off to a slow start due to cautions it eventually became one for the record books and disappointment for the Friesen fans. If Mother Nature had not intervened forcing the DIRTcar Series event at Fulton to be cancelled on Friday Matt Sheppard would not have been at Fonda on Saturday and there would have been a different outcome. Sheppard was the overall winner taking home $8,000 for his win, the fourth at the track.

We went to Albany-Saratoga last Tuesday for their rescheduled opener but again the weather had a lot to say about whether Lyle and his crew would complete the night and it didn’t cooperate. Some of the heats were complete when it began to rain and although Lyle tried to fight off the rain the final downpour forced him to call the show and issue rain checks for any Friday night or the rescheduled Come ’N Get It Modified Shootout on May 14.

Something new came into view this past week, VP Racing Fuels Summer Shootout Series for DIRTcar Sportsman at Utica-Rome, Albany-Saratoga and Lebanon Valley, a special series that will tabulate points for six events throughout the summer and the overall champion will take home a VP Racing Fuels car wrap, driver suit and $3,000 in VP Racing Fuels consumer products. Each race will pay $1,000 to win. The first event was to be at Utica Rome this past Sunday but we know what happened to that.

As we know when Mike Bruno of Devil’s Bowl bought the King of DIRT series earlier this season, soon after Albany-Saratoga and Lebanon Valley pulled their scheduled races leaving Bruno with just the events at his track in Vermont. It seems the three tracks have come up with their own series. Bruno says he will have an announcement soon regarding the KOD series. This Saturday at Fonda is Meet and Greet Night sponsored by Bob Hilbert Sportswear and Regional Animal Shelter Benefit with several raffle give aways. Racing begins at 7:00 p.m.
Congratulations are in order for Demetrios Drellos on his recent engagement to Lexi Jameson. We shot this photo of them in the pits at Albany Saratoga on Tuesday before the rainout.