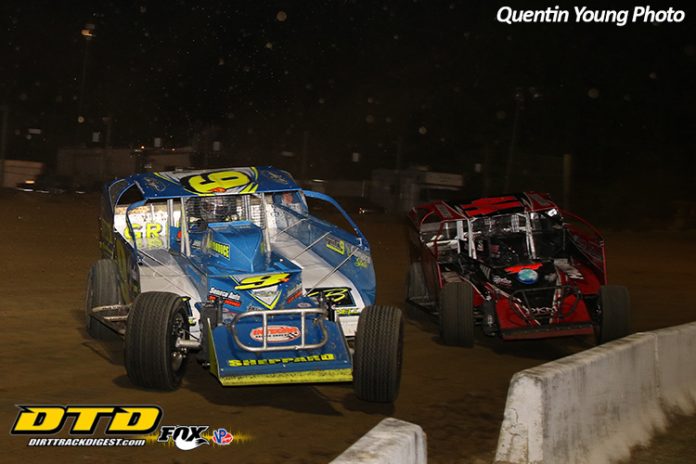 Back in 2017 the man they call “Super Matt” Sheppard put up a career high in wins with 41. It’s hard to imagine Sheppard could have another season with that many wins, but if his start to 2019 is any indication Sheppard could very well top that mark.

All Sheppard has done since racing has started up here in the Northeast is run seven feature events with five wins and two runner-up finishes. The only blemish on an otherwise almost perfect mark is that Sheppard suffered motor issues in his small-block Modified during the heat race at Georgetown ending his day back in March. Even more impressive is that Sheppard won every feature race he ran in April at tracks he does not run regularly including the Orange County Fair Speedway where he had never won before in his career.

It is a start to a season that hasn’t been seen in years or even ever. I know there are the naysayers out who always say, “Well it’s easy to win when you start on the front row every race.”

Fact: Sheppard has only started on the front row once (second, Can Am), in all of his other wins this season, Sheppard has started no better than seventh (8th, GV) (12th, OCFS) (11th, Fonda) (7th, Del).

“It’s been quite a start to the season for sure, I think 40 wins is still going to be a stretch just because I don’t run three nights a week anymore on a regular basis,” explained Sheppard. “But if you can win 25 or 30 big races, that more than makes up for it. Things have been going well for us, but it’s only April and it’s a long season and we can’t get ahead of ourselves. We just have to keep plugging away and working hard to get better at every race. What is pleasing to me is that it’s just not one car that is going good, but all of our cars have been rolling along and are very strong.”

At Delaware International Speedway, Sheppard had to really work get the win as pole sitter Craig Von Dohren jumped out to an early lead looking for his first ever Short Track Super Series win. Sheppard methodically worked his way to the front and by lap 12 was into the second spot after passing Andy Bachetti. Von Dohren and Sheppard engaged in a hard battle for the lead with Sheppard trying high and low each lap looking to take it.

Sheppard looked to have Von Dohren cleared on lap 15 but the caution was displayed before the lap could be completed putting Von Dohren back in front. When racing resumed the battle was back on, Sheppard was all over the back bumper of Von Dohren each lap with Von Dohren able to hold off his charge. Sheppard did a masterful job of mixing up his lanes behind the leader and after trying a couple of laps on the outside, Sheppard dove to the inside coming out of turn four to grab the lead on lap 31.

“It took all I could to get by Craig (Von Dohren), I was all over him and working him pretty hard but he’s a good driver,” explained Sheppard. “Once I was finally able to get him and have that little bit of clean air and an open race track, that helped quite a bit. I’m not sure we made all the right calls on this race car tonight, but it was still good enough to get us to victory lane tonight and it shows we have some good cars.”

Once out in front, Sheppard usually takes off and leaves his competitors in his wake but not on this night. Von Dohren stayed with the leader as Stewart Friesen and Jeff Strunk were making moves to the front to make it a four-car battle for the lead. Von Dohren and Friesen were both able to edge out in front on separate restarts going into turn one, but Sheppard would always have the speed and power coming off turn two to regain his advantage.

“That’s kind of what the track was giving us there,” mentioned Sheppard. “You could go in high and get a big run off and give up a bunch on entry or you could go in low and gain a bunch and then give it all up on exit. I was just hoping I could get through the corner clean enough and then set sail down the back straightaway. My main focus on the restarts was to get one good clean lap in and then start rolling.”

Friesen’s charge came to an end after hitting the inside railing in turn one resulting in a flat left front tire forcing him to pit. Strunk was able to move by Von Dohren late in the race for second and stayed with the leader Sheppard.  He just didn’t have quite enough speed to challenge Sheppard who went on to score his second straight STSS win at Delaware.

“This place has been really fun for us,” said an obviously thrilled Sheppard standing at his trailer after the race.  “We had really good luck down here last year and again tonight.  It’s just a shame it’s so far away, I told Chad (Delaware track manager Chad Cathell) that I wish this place was a lot closer. I am really happy we came down here and got us another win. I couldn’t ask for a better way to start the season.”

I asked Sheppard what he thinks is behind the team’s quick start to the season.

“I don’t really know to tell you the truth. We work hard in the shop and obviously we are learning something. We’ve had some luck and fortune go our way and that always helps. We have good cars from Bicknell and strong C.C. engines and everything is going our way right now. Our shop maintenance program is working good and keeping us away from DNF’s.  It’s been a combination of all of those factors I guess.”