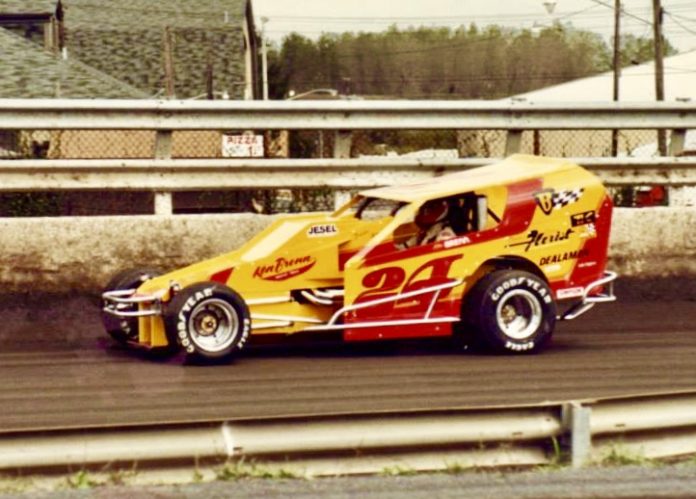 It seems like so far in 2019 that the local New Jersey / Pennsylvania Dirt racing fans have suffered many losses off the track. Bill Hewlett along with his wife Davene, the fathers of both Rick Holsten and Steve Searock and then last week we lost Darren McCaughey. There may be others and I apologize if I missed someone but those are the names the come to mind as I sit here and write this story with a heavy heart. Certainly too many at one time. It seems like no racing fan has had time to move on before another death is upon us. I know life moves on, but it’s just too much at one time, at least for me.

Now it has happened again today as word spread that we have lost Ken Brenn Jr., from an apparent heart attack. This is not meant to downplay any of the deaths I referred to earlier, but this one has hit me hard.

You see I was just a 11-year-old kid when I started going to Flemington Speedway in 1970. My favorite drivers back in the day were Dick Havens, who drove the Taylor & Sons No. 93, who were friends of our family along with the legendary Billy “O” Osmun in the Norcia Brothers No. 81. Then in 1972, this young long-haired kid came along in the rookie division named Ken Brenn Jr. I immediately took a liking to the young man as he dominated the rookie class that year in his immaculate No. 24 owned by his father Ken Brenn Sr.

After winning four rookie races that season, Brenn Jr., moved up to the Sportsman ranks and won his first Sportsman feature that same year. Brenn went on to win nine Sportsman features in 1973 at both Flemington and East Windsor Speedway before moving up to the mighty big block Modifieds.

Brenn Jr., won his first Modified feature in 1975 at East Windsor. 1976 is when Brenn came to life in the Modifieds winning a total of eleven times. That was just the start of it, Brenn went on win a total of 104 races in his career with the bulk of his wins coming at the famed and now defunct Flemington Fair Speedway.

Brenn drove for multiple teams throughout his career. Starting with his father’s No. 24 then to the famed Trenton Mack No. 74. He also spent time driving the Romeo No. 44, the Stashluk No. 71 before finishing his career piloting Benny Scheer No. 1A.

Brenn would post at least one win in each of these cars on both dirt and asphalt with his last win coming in 1999 at Flemington on the asphalt. The cars Brenn drove were always among the nicest cars on the track and his own No. 24’s were always my favorite looking cars even to this day.

I sort of got away from why I am writing this, but I thought it would be good to know some of Ken Brenn’s accomplishments in racing. I don’t pretend to have known Ken Brenn Jr., personally and am writing this from a fan’s perspective. Like I said earlier, I was a fan of his right from the beginning of his rookie year. But what really made me a die-hard fan was when Brenn started to challenge the then track kingpin Stan “The Man” Ploski. You see, my younger brother and cousin were huge Stan Ploski fans to the point of being obnoxious about it. So, me being me, I had to go in an opposite direction just to be different and cheer for a rival driver, especially a driver that had previously driven the Brenn No. 24, and young Ken Brenn Jr., was the perfect choice. That is nothing against Mr. Ploski who was and remains one of the nicest drivers I have ever talked to. But I just had to have an opposite view, what fun would it be if we all cheered for the same driver? My brother, cousin and I had a lot of goods times ribbing each other when one of our drivers won and it was all in good fun. Ken Brenn Jr., provided me with a lot of those memories that I will cherish forever. Thank you Mr Brenn.

Although Ken Brenn won over 100 feature events in his driving career, it was a race he didn’t win that stands out the most to this fan. It was 1980 during Super DIRT Week at the New York State Fairgrounds in Syracuse, N.Y. The year of the “Batmobile.” Everyone knows the story and how it started a crazy weekend with teams adding sheet metal to try and close the gap that Gary Balough had on the field. However, the Brenn team refused to go along with the rest of the crowd (you see, just like me) and kept their car the same as when they unloaded it. Brenn ran a very strong race and finished fifth that year in his standard classic Modified which earned him best in class. I remember being very proud of Ken Brenn that day and even though the record book says otherwise, to this day I still consider him my winner of that race.

I happened to run into Ken Brenn a few years back at Motorsports and was able to chat with him, albeit for only a few moments, and it was a pleasure to speak with him. He was the same person then as he was many years ago when I was a young man growing up watching him wheel his Modified around Flemington. Full of life, fun loving with a smile a mile wide that showed off his natural charisma. I can still picture in my mind seeing Brenn walk through the Flemington pits on a Saturday night with that crazy hat on. I have very few regrets in my life but one of them is that I wish I had the opportunity to write about racing back then like I do now. I would have loved to interview the drivers of the past, especially Mr. Brenn and to have had the ability to have known them on more of a personal level.

Ken Brenn Jr., you will be missed by everyone. Especially by your family and friends but keep in mind there are quite a few people out there who you may have never known that you made an impression on in their lives. You provided your legion of fans with many thrilling moments throughout your career and to this lifelong fan memories that will never be forgotten.

Godspeed Ken Brenn Jr! May God Bless your family and friends in this time of mourning.