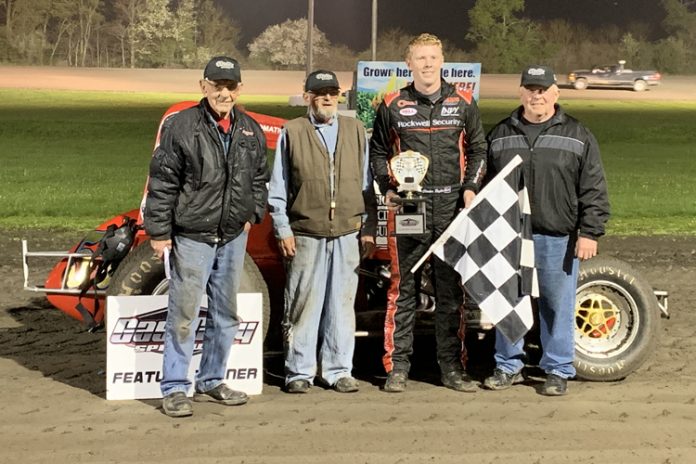 GAS CITY, IN — After a long winter and a rainout last week, Gas City I-69 Speedway drivers and fans got some relief for their spring fever as the track opened its 2019 season Friday night. Despite a persistent mist in the air, a large crowd of race-hungry fans was on hand for the six-class program at the quarter-mile dirt oval and saw defending track champion Clinton Boyles win a torrid 25-lap, non-stop, non-wing sprint car feature.

Derek Losh came out on top of a battle with Ryan Sutter to win the 20-lap UMP modified feature. Brad Strunk dominated the 15-lap American Mini Sprint Association (AMSA)’s 1,000 cc winged mini sprint feature in the first of five events that group is scheduled to present at Gas City in 2019. Joey Spiewak was triumphant in the 10-lap street stock feature, and Bill Lewis led all 10 laps of the super street main event. James Headley won the 10-lap hornets feature. The jam-packed program featured 116 race cars (including 35 sprint cars) and challenging weather, but was still over by 11:47 p.m.

Boyles started eighth in the 20-car sprint car feature but was third by lap two, took the lead from Chad Boespflug on lap four, and was lapping cars before the halfway point. Justin Grant passed Boespflug on lap 11 for second place and finished in the runner-up position. Kevin Thomas Jr., Brady Bacon and Tyler Hewitt rounded out the top five in a field of heavy hitters, but Boyles was not to be denied. He drove the same car that took him to the 2018 track championship — Paul Hazen’s red No. 57 DRC that is sponsored by Physical Medicine Consultants and KECO Coatings and powered by a Kercher-prepared Chevy engine.

Nathan Loney started second in the UMP modified feature and led the first four laps before Zeke McKenzie charged under him in Turn 2. Loney regained the lead in the same turn on lap nine before McKenzie got him back with a move to the outside in Turn 4 on the following lap. Two laps later they banged together on the backstretch, and Loney pulled off into the infield due to the contact.


McKenzie continued to show the way as the cars jerked their way around the track until something broke on his car too, which put Ryan Sutter into the lead on lap 16. Losh came on strong at the end and dipped under Sutter in Turn 4 on the white-flag lap for the victory with his Superior Sales and Service No. 21. Sutter, Scott Orr, polesitter Bill Griffith and Tony Anderson, who started 17th, rounded out the top five.

After the red for Arvin’s flip at the start of the mini sprint feature, polesitter Brad Strunk dominated that race with his Parsons Construction Group No. 23S. He had more than a half-track lead over runner-up Jack Nickles at the checkered. Howard McCormick started 15th and last but finished third. Ethan Rutherford and Chuck White were next across the line.

Bill Lewis led all 10 laps of the super street feature in the R & R Transmission/Thompson Trucking No. 14. Jeff Matheny ran in second place until Shawn Valenti got under him at the beginning of the backstretch working lap four, but by the time they reached Turns 1 and 2 Matheny slid to a stop to bring out a yellow. Jeffery Jessup ended up third behind Lewis and Valenti. Matheny rebounded for fourth and Tony Anderson rounded out the top five.

The Headleys were the stars of the hornet feature. James Headley Jr. started second and led the first lap before his father got the lead with a move to the inside coming out of Turn 4. Headley Jr. regained the lead at the start-finish line on lap five. Eric Solms passed Headley for second on the next lap in the same spot, but Headley got second back on lap seven. His son pulled off the track and headed to the pits with two laps to go due to mechanical difficulties, which gave the lead and eventual victory back to his father in the All Star Performance No. 81. Solms held on for second followed by Logan Easerday, Stevie Clark and Frankie White.

The show was streamed live on Speed Shift TV.

Next Friday night is the track’s “Salute to Moms” show in honor of Mothers Day. Sprint cars, UMP modifieds, street stocks, super streets, hornets and a spectator car race where all the drivers must be mothers are on tap for that program. The latter pays $200 to win.