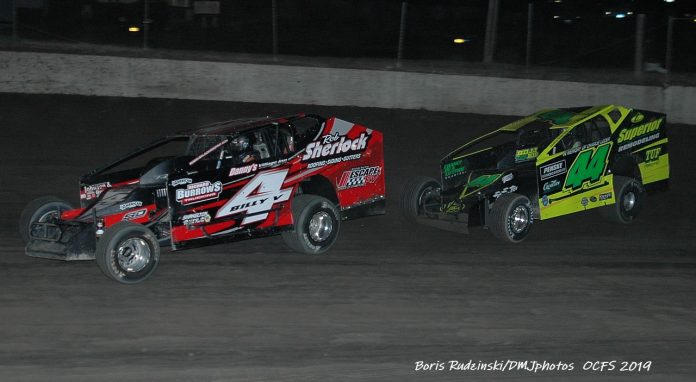 Perrego, who enjoyed the best campaign of his young racing career last year, has been dealt with a series of adversity as he challenges to defend his Modified crown and the $40,000 prize that goes along with that title.

Mechanical rear end issues and a flat tire thwarted Perrego’s chances at a pair of top finishes as he entered Saturday night’s racing program already 58 points behind early-season leader Brett Hearn. The talented Montgomery driver has been fast each time out, but the results just weren’t there.

However, with April now in his rearview mirror, Perrego welcomed a new month and turned the tables on his hard luck as he picked up his first victory this season in the Modified 30-lap main event. It was the sixth career win at OCFS for Perrego, who won four times during his championship campaign in 2018.

Perrego, after setting fast time during hot laps for the second straight week, spun the wheel and came up with what proved to be the Lucky 7 starting position. OCFS locks in 12 cars for the feature through its timed hot laps this year and the fastest driver spins an inversion wheel with numbers four through 12.

Mike Gular benefitted from Perrego’s spin as he started on the pole and appeared to be the class of the starting 29-car field. Gular was able to keep distance between himself and Jerry Higbie as the laps ticked away until lapped traffic became a factor later in the event.

Perrego, meanwhile, moved into third place as he moved past Jimmy Horton on the seventh lap and then started to close in on Gular and Higbie. Perrego finally moved ahead of Higbie with 24 laps completed.

Gular was now racing in lapped traffic as Perrego quickly moved in and nosed ahead down the homestretch for a brief lead with 28 laps down. Gular, however, moved back in front between the first and second turns, and had a narrow cushion down the backstretch.

But the two drivers were dead even as they raced off the fourth turn and down the homestretch. Perrego had a slight lead when their cars made contact before completing the 29th lap – sending Gular’s car against the inside jersey barrier as Perrego continued on.

Donnie Wilson rolled his car in the second turn to force a red flag following the restart as Jeff Heotzler Sr. and Corey Lowitt were also involved. Wilson wasn’t injured, but his car had extensive damage.

Perrego was able to hold his ground until the finish as Higbie, Craig Mitchell, Tommy Meier and Hearn rounded out the top five. Mitchell and Meier both passed Hearn on the final lap.

Greg Sleight grabbed his second straight victory in Sportsman action as he held off a late charge by Mike Sabia in the 20-lap main event. It was Sleight’s 26th career victory as he stands in third place behind Krummel (33) and Tim Hindley (27) on OCFS’s all-time leader board.

Sleight, who started in seventh spot for the 27-car field, grabbed first place from Jared LaBagh following a 19th-lap restart. Sabia and Jesse Leiby also advanced after the restart as LaBagh fell all the way back to fifth place.

LaBagh was able to get past Grant Hilfiger for fourth place on the final lap as Hilfiger settled for a fifth-place showing. Both Sleight and Hilfiger pace the division with a pair of wins in 2019.

Joe Bonetti ran caution-free for the first 11 laps to pace the field before Jordan Lawrence and Justin Gozzi were involved in a second-turn tangle. Sam Martz Jr. grabbed first place away from Bonetti on the 15th lap before LaBagh drove in front two laps later.

Scheffold, who started 13th, grabbed the lead away from Donald on the 14th lap and then held off Bob Sleight Jr., who was seeking his second straight win, to the finish. Donald had led the event from the third lap.