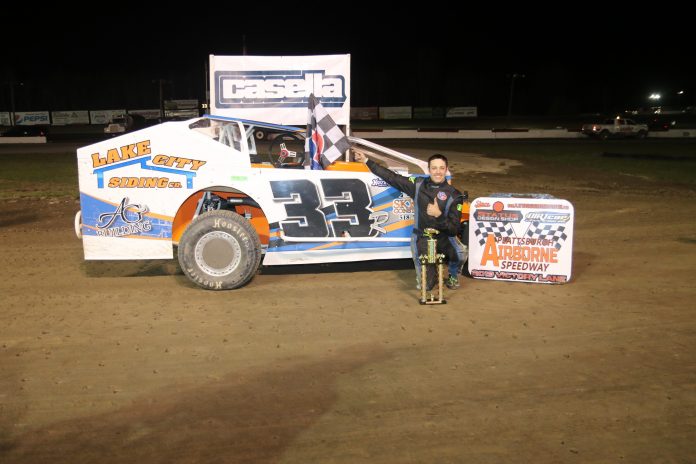 Pecore would jump out to the early advantage, but it wouldn’t be long before the 33 of Travis Bruno would go to the front of the field. Both drivers would play a cat and mouse game through traffic before the first caution came out with 23 laps completed.

Shane Pecore would take the race lead back from Bruno on the ensuing re-start, and lead the majority of the event, while a hard charging Connor Cleveland and Adam Pierson were in tow.

Cleveland used a re-start with about 20 laps to go to sneak by Pecore, and pulled away from the rest of the field until he reached lap traffic.

With nine laps left in the event, Cleveland and the 88 of Jeffrey Lepalme made contact, sending the 09 around, handing the lead back to Pecore.

That lead would be short lived however, as Pierson used the outside lane to his advantage to take the lead away. Travis Bruno would also have a great re-start, using the inside to his advantage.

Bruno would wrestle the lead away from Pierson on the inside, and go on to get the biggest win of his career.

Mario Clair and Steve Bernier would be the front row starters in the 30 lap Egglefield Brothers Ford 358 Modified feature. Clair would use the inside lane and slide up in front of Bernier to lead the early portion of the event.

A caution for Jessey Mueller would re-rack the field, and off the re-start Bernier would blast out to the front and take the lead away.

While this was happening, the 38 of Luke Whitteker was quickly moving his way up through the field from his 16th starting position, hanging on loosely through the corners.
Whitteker would work his way up into the top five before a late race caution would reset the field.

On the ensuing re-start, Clair would take the lead back from Bernier. Contact between the one of David Hebert and the 90 of Dany Gagne would allow Whitteker to quickly move to third.

The Iroquois, Ontario driver would get by both Clair and Bernier in the closing laps, en route to his first career win at the Plattsburgh Airborne Speedway. Clair would come home second, Bernier third, Hebert fourth, and Gagne fifth.

Marc Lalonde would use an early race lead to his advantage, to take home his first career win in the Hartson Total Opening Pro Stocks.

The eight machine drove a smooth event, but C.D. Beauchamp was looking to keep his streak alive and was closing toward the end.

He would pull within a half of a car-length, but it wasn’t enough, as Lalonde would win the 25 lap feature event. Beauchamp would finish second, Sid Harmer Jr. was third, Stephane Lebrun 4th, and Roch Aubin 5th.

Zach Daniels would take the early lead in the Ernie’s Discount Tools Super Stock feature event, but it wouldn’t be long until Brent Jarvis would work his way up into the race lead.

Jarvis would hold it for while, but Jim Mckiernan would work his way up into the number two position quickly.

It wouldn’t be long before Mckiernan would work his way past Jarvis, to win his 2nd race of the 2019 season.

Jarvis would hold on for second, battling with both Mckiernan and Tylor Terry, who finished third, Zach Daniels fourth, and Joe Daniels fifth.

The Chris Frennier motorsports Strictly Stocks would see Caleb Tourville take the lead off an early race caution. Tourville would lead most of the way until a late race caution put Josh Laporte right next to him.

Laporte would use the outside to pickup the win, and get the Chris Frennier motorsports 2 to go bonus.