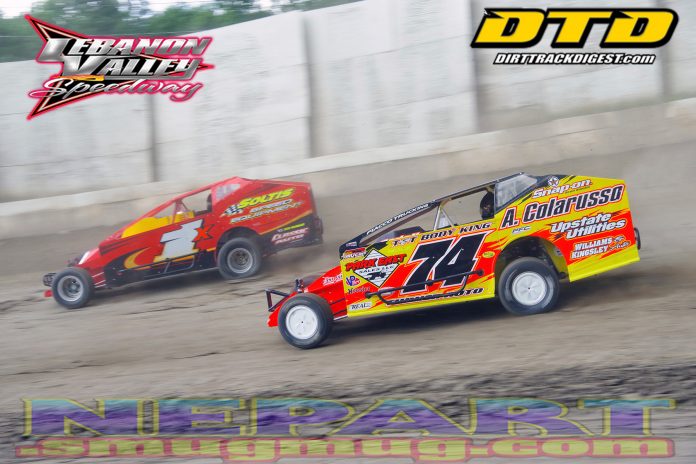 WEST LEBANON, NY – Competitors and fans were greeted with much warmer conditions Saturday night at Lebanon Valley Speedway. There was plenty of action to go around. And plenty of attrition as well.

Ricky Davis started the Modified feature from the pole, but quickly lost the point to Matt Pupello, back after missing opening night (and having Bobby Hackel, IV drive in his place). Pupello, racing an experimental engine designed to cut costs, was able to show that the cheaper engine was plenty competitive as he opened up a good advantage on the pack.

Further back, progress was slow among the top finishers from opening night. Kenny Tremont Jr. could only make slow progress, while Peter Britten and L.J. Lombardo were a little better on the evening.

Kyle Armstrong quickly moved up to second from the fourth starting spot and tried to make up ground on Pupello. It was tough going at first, but eventually the gap began to close. Just before halfway, a small puff of smoke came out of Pupello’s car.

Then, it happened. Pupello blew his left rear tire and slowed suddenly, bringing out the first yellow and giving Armstrong the lead. J.R. Heffner, driving his new Cyclone chassis moved up to second.

Armstrong seemed to have Heffner’s number for most of the race, so he was able to pull out to a big lead. Unfortunately, Armstrong’s race turned pear-shaped as he slowed with a couple of laps to go and gave Heffner the lead. From there, Heffner held off a charging Andy Bachetti to take the win.

Heffner did acknowledge the misfortunate of Pupello and Armstrong that allowed him to claim victory after the race. That said, he was still very pleased with his Cyclone.

“The DKM Cyclone was excellent tonight,” Heffner said. “It’s been running strong since [day one] and we’re adjusting to the track and learning the car.”

Behind Heffner and Bachetti was Ronnie Johnson in third. Britten advanced up to fourth from 14th, while Eddie Marshall was fifth.

The Small Block Modified feature was a little rougher than on opening night, but ended up with a similar result.

Bachetti started 11th and had a very quick car. Maybe a little too quick as he spun in Turn 4 on the first lap and triggered a chain reaction crash that involved a number of other teams.

Bachetti and Dillon Steuer continued without damage, while Chris Curtis and Brandon Pitcher continued after checks in the pits. Olden Dwyer and Jason Herrington were done for the night.

Timothy Davis was able to get past pole-sitter Kim LaVoy for the lead on Lap 2 just before an incident broke out in Turn 2 involving Frank Harper, Steve Hough and Ricky Davis. Hough was done for the night, while Davis and Harper continued.

With the green back out, Timothy Davis pulled out to a huge lead on the rest of the pack. Meanwhile, Bachetti was making short work of the rest of the field, eventually reaching second by Lap 10.

Bachetti then ran down the No. 7T and took the lead away from for good on Lap 17. From there, Bachetti pulled away to take his second straight win. Timothy Davis was second, followed by Harper, Dillon Steuer and Brett Haas.

The Sportsman season began Saturday night with 27 teams out to show their might. Chris Lynch got the pole by virtue of winning the first heat race and tried his hardest to get an early season score.

John Virgilio showed early that he had the car to beat. He was able to run down Lynch after the restart and take the lead on Lap 6. Immediately afterwards, Scott Zehnacker spun in Turn 4 to bring out another yellow.

Rob Maxon once again showed that he’s going to be a regular threat in the class Saturday night. He moved up to second and began putting pressure on Virgilio for the lead. Ultimately, Maxon got held up by lapped traffic, which gave Virgilio the gap he needed.

Virgilio was able to pull away in the closing laps to take the victory. Maxon was second, followed by Peter Carlotto. Pat Jones was fourth, while Robby Knipe was fifth.

Pro Stock saw Rick Duzlak start from the pole in a new chassis after his big crash on Opening Night. From there, Duzlak was able to keep himself out in front while a fair amount of chaos reigned behind.

Opening night winner Rob Yetman had a tough time Saturday. Starting 11th, he could only make slow progress towards the front. Then, he got in a brisk battle for sixth with Jason Casey. The two drivers came together entering Turn 1, resulting in Jason Casey spinning out.

The younger of the Caseys was able to get back to Yetman late in the future, but contact was made again. This time, both drivers spun out. Yetman spun to the inside, while Jason Casey’s No. 324 nosed into the outside wall, ending his night. Yetman would eventually finish eighth.

On the restart from this incident, a stack-up occurred on the backstretch that eliminated three more drivers. In addition, a good amount of fluid was dropped on the track, resulting in a significant cleanup.

Ultimately, the race came down to a duel between Duzlak and Rich Crane. The Connecticut-native tried to get to Duzlak’s inside on the final lap, but could not get past as Duzlak took his first win of the season.

In Pure Stock Feature No. 1, Keri Vanderburg started from the pole and ran well early while some of the quickest drivers in the race fought it out among themselves.

Ed Hatch likely had the fastest car, but he collided with Mike Eichstedt on Lap 2, spinning both drivers out and drawing a caution. The incident dropped both drivers to the rear, but they would continue.

On the restart, Rob Partridge was able to get past Vandenburg to take the lead. From there, he opened up a decent gap on the field.

A spin for Jake Gomm closed everyone up for a Green-White-Checker, but Partridge was able to hold off the field to take the win. Jeff Kreutziger was second, while Vandenburg was third. Evan Denue and Hatch were fourth and fifth.

Pure Stock Feature No. 2 saw some issues getting the race started. After three failed attempts, Zach Seyerlein and John Devine were sent to the rear for getting out of line.

Once the race finally started, Don Kennedy was able to drive to the lead in what turned out to be a rough race. Lap 2 saw two separate incidents that brought out the yellow. The first involved Karen Verhagen spinning in Turn 4 and Craig Coons hitting the wall while trying to avoid her. In Turn 2, Dom Denue hit the wall, then clipped Devine. Dom Denue was out on the spot, while Verhagen, Coons and Devine continued.

Kennedy was able to hold on to take his first Pure Stock win at Lebanon Valley. Ray Hall Sr. was second, followed by Jeff Meltz Sr., Seyerlein and Rocco Procopio.

Kennedy spun on the first lap and ended up getting hooked to Ray Hall Sr. Later, Hatch, Eichstedt and Evan Denue had separate spins.

Kennedy’s night came to an end when he spun on Lap 10 in Turn 4. He was collected by Evan Denue, Verhagen and Procopio. All four drivers were done for the night.

Partridge led up to the point without too much of a problem. Then, mechanical issues struck. Quite simply, the right rear wheel came off of Partridge’s car. That ended his night and brought out a caution. Partridge’s misfortune gave Hatch the lead, but his wheel was not the last wheel to go flying.

Jeff Meltz Sr. finished second, followed by Seyerlein. Eichstedt was fourth, while Brian Walsh was fifth. These were the only finishers out of 13 starters.