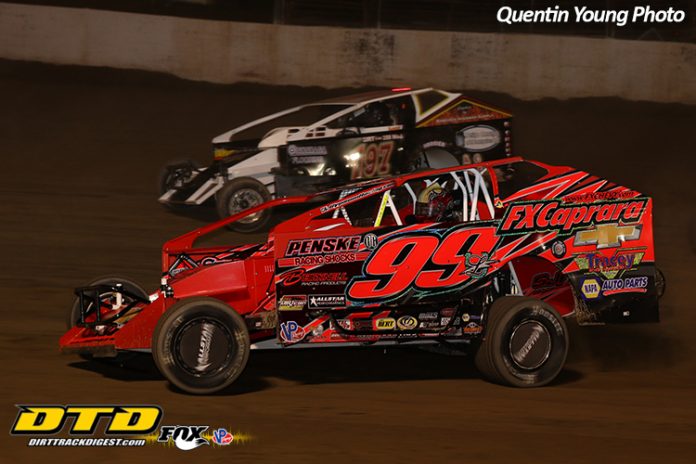 FULTON, NY – A lightning-fast track greeted a full field of 358-Modifieds, and it was Larry Wight fending off Pat Ward the whole way for the opening night win.

Dale Planck and Pat Ward led the 358-Modifieds to the first green flag of the year, but it was fourth starting Larry Wight making a daring move to split the middle and take the lead before the first lap was done. Ward stayed latched to teammate Wight during the first run, while Planck and company drifted back. By lap 10, the top two had caught traffic, with Ward trailing Wight by a mere car length, but the yellow waived the next lap, giving the leaders open track.

While the top two remained status quo, invader Ryan Arbuthnot snatched third from Planck after starting at the back of the top 10. As the race reached halfway mark of the scheduled 35 laps, Wight was starting to gap Ward and Arbuthnot, building up a one second lead. A red flag on lap 19 was flown for Joe Shields going for a barrel roll, but Shields drove away and continued.

Ward nearly snagged the top spot from Wight on the restart, but the pace was slowed again as Robby Bellinger’s car lost the front end and halted the race on lap 20. After two more failed attempts at keeping cars straight, Wight resumed position at the front of the field.

With ten laps to go, Wight held a steady three car length lead over Ward. Meanwhile, Todd Root clawed under Arbuthnot for third, while Planck, both Tim and Tom Sears, and Ronnie Davis III. As the laps wound down, Wight’s lead slowly extended, up to just over a second with five remaining. Ward made a last ditch effort as the leaders reached traffic at the finish, but to no avail. After 35 lightning-fast laps, it was Larry Wight snatching his 22nd career Fulton Modified win. Pat Ward claimed second, Todd Root third, while Ryan Arbuthnot and Ronnie Davis III completed the top five.

“This is a brand new car, and it’s set up very similar to our Big Block,” said Wight. “It seems to be going good now for sure. We may not be here every Saturday night, maybe hit and miss, but it’s hard to pass up a points lead.”

Of course, Wight said he may be hit and miss last season, then he ended up winning the title.

While Wight led all 35 laps, he didn’t start on the front row. A rocket start with a three wide, through the middle move put him in control after one circuit.

“I think everyone spun their tires on the start, but I hooked really well,” Wight said of the start. “Under all those yellows, I was just trying to keep the tires from sealing over, dragging the brake and swerving some. It all just clicked tonight.”

29 Modifieds were on hand for opening night, with a number of northern and western invaders. Even without these invaders, expect 20 or more to remain through the season, an increase over 2018.

Chris Fleming took the lead from Brandon Mowat early in the Late Model feature, then remained wide open and relatively unchallenged the remainder of the distance, picking up the 20-lap main event win over Chad Homan.

The first 25-lap Sportsman main saw Matt Janczuk and Alan Fink run door-to-door much of the distance, with Janczuk winning by about eight feet at the checkered. In the second feature, Jack Meeks went relatively unchallenged to take the victory over Chris Mackey and Amy Holland. In the third feature for the 63 cars in attendance, Joel Hall came out on top of a wild battle with Rick Miller, Willy Decker, and AJ Miller for the win. Brandon Chretien grabbed his first big car win in the Novice Sportsman feature.