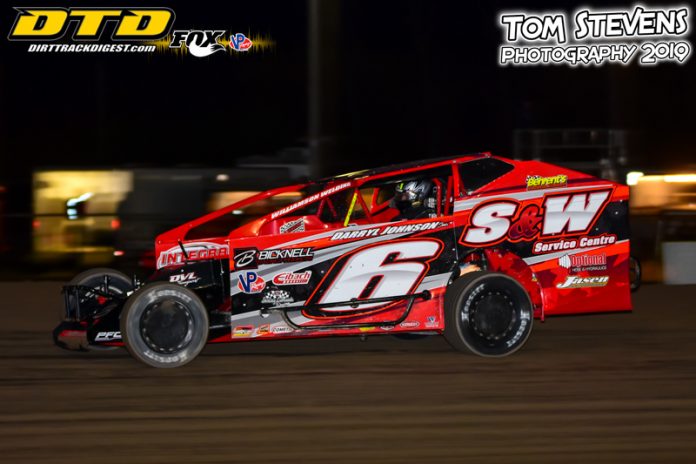 Tyler Willard and Chad Brachmann shared the front row in the 35-lap feature for the S&W Service Centre 358 Modifieds. Brachmann would take the lead on lap five after Willard bobbled off turn four. Todd Gordon would take the lead away off a lap nine restart. Gordon and Brachmann would battle for the lead for several laps. Gordon popped the motor down the front stretch to bring out the caution on lap 13, giving the lead to Mat Williamson, who took second away from Brachmann. The restart would see Williamson pull away from Brachmann as Gary Lindberg, Tim Jones, and Fred Carleton raced in the top five. Williamson would start to open his lead as Lindberg started to reel in Brachmann. The lead trio were all within two car lengths of each other. Brachmann got high in turn three and spun and Tim Jones had nowhere to go to bring out the red flag. Both drivers were alright and talking to safety officials. On the restart, it was Williamson back in the lead as Lindberg was pressuring Williamson for the lead. Williamson would hold off Lindberg to score the win.

The Hoosier Stocks held their first home race of the season as part of the Insta Panels Duel on the Dirt with Dave Bailey showing the way. Jason Fontaine would battle with Chris Hale for second place. The battle between Hale and Fontaine would allow Bailey to pull away from the field. Bailey would go on to score the win.

Dan McKay and Anthony Kelly Jr shared the front row for the Central Fabricating 4 Cylinders feature event with Kelly jumping out into the early lead. Tyler Lafantaisie would take second away from McKay on lap four and would go after race leader Kelly. Kyle Rothwell was on the move starting 16th on the grid and moved to eighth place at the halfway mark.

Rob Meisner would lead from the drop of the green flag in the main event for the Doidge Building Centre’s Mod Lites. Sean “Cheeseburger” Iftody raced in second as RJ Pietz raced in third. Josh Sliter would spin in turn four to bring out the caution on lap nine. Brent Begolo would take the lead away from Meisner on lap 11 and would check out on the field. Begolo would pull away to score the win.

John Couture led from the drop of the green flag in the feature event for the Dave’s Auto and Speed Centre V6’s. Couture would lead until suffering a broken right front with three laps to go, bringing out th caution. The restart with three laps remaining saw Kevin Conley and Colton Lane on the front row. Conley would lead the final three laps to earn the win.

Next Saturday, 2 Cool Automotive presents the Brian Stevens Memorial for the Modifieds featuring $444.00 Pole Dash Challenge. The Mother’s Day eve event will also feature the first race of the TMR Racing 4 Cylinder Triple Crown and Go Kart Display and Exhibition. Pit gates will open at 5 pm with grandstand gates opening at 5:30 pm and the first green flag of the night will fall at 7 pm. For more information and for the complete Merrittville Speedway schedule, log online to www.merrittvillespeedway.com