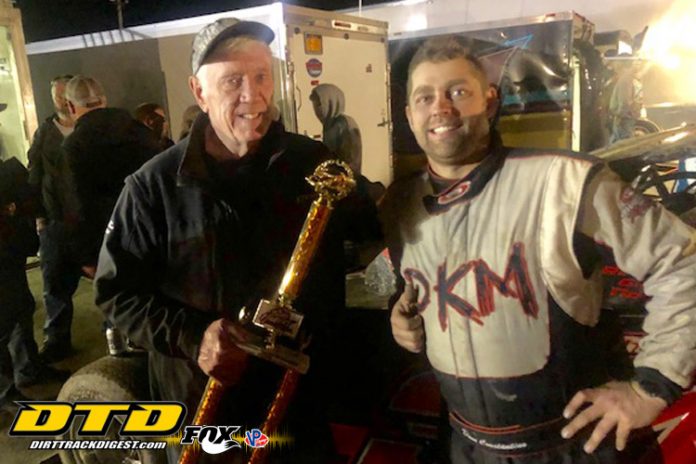 This rain has really been wreaking havoc on local race tracks and so far Fonda and Lebanon Valley have been able to get their past two Saturday night shows in the books. Albany-Saratoga is just plain swamped with rain every Friday night and even when Promoter Lyle Devore rescheduled one of his Friday shows for the following Tuesday, it rained less than half way through that show also. There was a first time winner at Fonda on Saturday when Dave Constantino pulled onto to the famous checkerboard square with his No. 34 Hoyenga owned Modified on only his second night of racing as a Modified driver. Dave grew up in racing with his father, John Constantino and his neighbor Maynard Forrette being his inspiration and mentors. Dave along with Erick Mack and Kyle Hoffman are the founders of DKM Fabrication, building race cars for many in the dirt track world of racing. Constantino got his chance in the Modified this season when Laudy Hoyenga of Sloansville asked Dave to drive his DKM chassis when one of his drivers, Shaun Pangman, took a hiatus to spend more time with his family. After two weeks of racing the Hoyenga/Constantino combination has shown great success.

Saturday night at Fonda was Bob Hilbert Sportswear Night and a meet and greet with drivers and fans was held prior to racing. Also Saturday a benefit was held for the Regional Animal Shelter and through several raffles and fund raising efforts $12,534 was raised to help the animals of the shelter.

For the past month the Halmar/Friesen Gander Mountain NASCAR Truck Team has been raising money for Autism Awareness through sponsorship puzzle pieces as graphics on Stewart Friesen’s truck for the race at Dover this past Friday. The team was able to raise $70,500 for the Crossroads Center for Children in Rotterdam, NY. July 13 Stewart and Jessica Friesen will sponsor Autism Awareness Night at Fonda through Corr/Pak Merchandising and One Zee Tee’s. It’s also Banner Night. Ivan Joslin drives the Autism Awareness Pro Stock No. 49 at Fonda this season. On Saturday Stewart and Jessica were on their way to Fonda to compete when the haul truck broke down in Maryland. Matt DeLorenzo was also absent on Saturday night due to an eye injury earlier in the day. Beau Ballard was one of the new faces in the pits at Fonda on Saturday and what was different, he was in a Pro Stock, one he had just bought. Beau is a regular driver at Afton Raceway in the IMCA division where he was track champion last season. Beau was also a three time IMCA winner at Fonda during the Lucia era. We look forward to having Beau at Fonda. And his father, Danny Ballard and former Fonda champion (1994 Pro Stock and IMCA in 2002, 2004, 2006) will be helping with the track prep on the grader. Danny has 27 IMCA wins at Fonda and 17 in Pro Stocks. The meet and greet on Saturday was very popular with the fans and drivers, both enjoyed talking on the track before the racing began. Michael Maresca was one of the many drivers enjoying the kids and giving autographs. Here we see Mike with four year old, Benjamin Lawrence of Indian Lake, NY. Mike will be a regular at Fonda this season and just picked up a ride in the No. 24 Modified formerly driven by Jeremy Wilder.

Seeing drivers coming from other tracks is reminiscent of the Fonda Speedway of ole. Saturday Roger Henion, Jr.made the trip from his home in Montgomery, N.Y., to run his small-block on a track that he had never seen before Saturday. Roger normally runs at Orange County but decided to come to Fonda on a night they weren’t running small-blocks. Roger was one of the popular drivers during meet and greet, seen here signing autographs and later he took a turn on the Fonda oval and tested out his No. 19JR during the Modified feature, finishing in the 20th spot.

Just as we were finishing this column a big announcement came from Glen Ridge regarding the Vengeance Modified event scheduled for Saturday, July 6, 2019, 50-laps paying $2,500 to win. The Vengeance event will now be a Fonda 200 qualifier, with the winner getting a guaranteed spot in the 200. Fonda is off that Saturday night and another interesting point is that Orange County is not racing on July 6 either. This could bring many cars to The Ridge on July 6 to run for a spot in the $53,000 Fonda 200.

In closing we send get well wishes to Fonda announcer Paul Szmal who underwent gall bladder surgery last week and was absent from his post at Fonda on Saturday. And thanks to Mike Mallet for subbing in. He was a good fit with Melissa Lazzaro and Jay Severson.