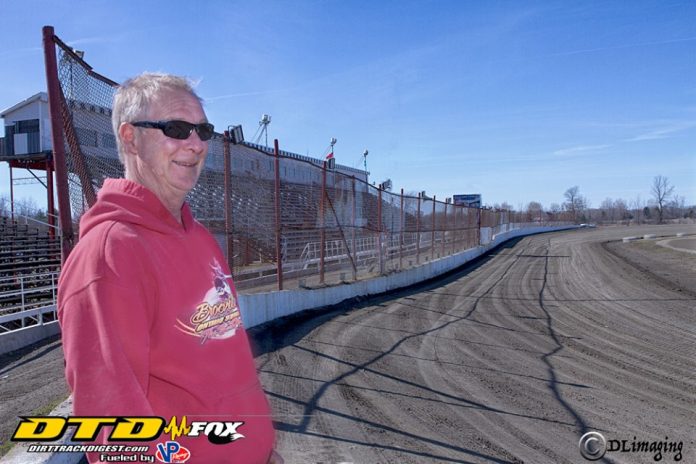 May 11 will mark the opening of the 50th season of racing at the famed Brockville Ontario Speedway, efficiently known as the Bull Ring!! Over the past 50 years, the track has seen some of the best drivers on dirt race over its clay, generating the history of the track. Over that same time, the technology in racing has changed immensely, from the home built car of the 60s and 70s to the showroom floor, fully prepped race-cars of today.

Ownership of the Speedway over the years has also changed several times. Built-in 1969 by the Hurley family, who at the time also owned Cornwall Speedway, ran the track until 1980 when it was sold. For the next couple of years the track remained idle until it reopened in 1982. The following year, the track came under the DIRTcar banner and rules remain with DIRTcar to this day.

In the early 90s, the speedway was still having its ups and downs, but all that changed in 1994, as that was when a young former fan and young entrepreneur named Paul Kirkland along with his wife Cheryl took a leap of faith and purchased the track. Paul, who was never a racer himself, would spend many a night with his dad Ken who was always helping out in the pits during those early years. As a young teen, Paul was always tagging along with his dad Ken, absorbing all the excitement and getting involved in one way or another. In fact, Paul has spent most of his life around Brockville Speedway in various forms from fan, to helping and to finally owning the track.

I asked Paul about some of the changes he had seen at the track over the years, as a fan and later as an owner.

“Back in the old days, basically there was one class and about 18 to 20 competitors, and everyone helped everyone and left the competition to be decided on the track. Nowadays, take for instance at our Fall Nationals, we get over 200 cars and running in a multitude of classes, and each team has their secrets as the competition is now on and off the track.”

The 50 years of racing at Brockville has also evolved from Thursday as race nights to Fridays and in 2006, it was changed to Saturdays where it currently remains.

Paul explained: “The changes over the years have really benefited us as car counts went up, so did our fan base. It just made no sense running on the same night as Can-Am or Mohawk, so once we secured Saturday nights as race night, everyone really benefited as there were no more local conflicts.”

Over the last 25 years, Paul and Cheryl worked endless hours along with many upgrades to the track, making Brockville Speedway one of the best tracks around, for both fans and drivers. Paul is one of the few hands-on owners who still prepares the track himself and diligently maintains it during race day. Paul also performs many of the maintenance jobs required to keep the track running and looking good. One of the greatest things that really stands out for Brockville Speedway is their dedicated fans. Over the years, Paul and Cheryl tried to deliver good racing and in a timely manner.

Paul said: “Shortly after I purchased the track I reached out to Ron Morin, the owner of Cornwall Motor Speedway, for advice in getting things started. I also talked to Howard Commander, who is the longtime promoter at Lebanon Speedway, he told me to keep things simple and short. Fans want to see good racing, but at the same time do not want to be up all hours of the night, especially the fans who bring the whole family, as people get tired if it drags on too long.”

The Kirkland’s have always tried kept this in mind over the years.

Paul also made two major track improvements over the years, the first coming in 2000.

Paul mentioned: “One of the first things we did was to remove what I call the tabletop corners, which in its day may have been alright, but as the speed of the cars has increased over time the track configuration was just too unconventional for generating good close racing. So we removed the flatness in each of the corners and put in the banking, which made racing at Brockville much more competitive, plus safer.”

Paul said: “The 2008 renovations to the track were very extensive. We had to remove a good portion of the wall on the corners and along the front straight to accommodate the expansion of each the corners by 25 feet.”

Paul went on to say, “Because of these changes, the track surface was now closer to a 3/8-mile track with wide corners which allowed for good side-by-side racing through each corner, which is much more exciting for fans.”

In 2009, one of the most significant changes came when Paul introduced the Brockville Speedways DIRTcar Northeast Fall Nationals. The Nationals came about after Paul began having a late Fall race back in 2006.

Paul’s longtime friend Henry Boer recalls: “It was Paul’s brainchild. I just added to the brainchild lol. There was a desire to create a big exciting multi-day event in Canada that featured a wide variety of classes. We also wanted a focus on the event as being a lot of fun, a good party for all attendees which included entertaining people for two or three days, plus racing! But the racing would always be the main feature! Obviously.”

He went on to explain: “There was also a desire to incorporate camping to enhance the community spirit behind racing and again augment the fun factor. The vision of holding an event when there were very little other racing events going on, so the chance of bigger car counts was more likely.”

But the Fall Nationals really got its transformation in 2009.

Paul explained: “When Orange County Speedway left DIRT sanction we applied to take over the role of hosting the final DIRTcar race of the season that was left in limbo after Orange County’s departure. The first year, we hosted the Small Blocks, Sportsman series along with the Pro Stocks. In 2010, we then picked up the Big Blocks, which really completed the show.”

From that point on, the Fall Nationals continued to grow over time and this year it will be celebrating its 10th anniversary. Paul has tried various types of series or special events, but one successful series was the Ogilvie’s Auto and Fleet Triple Crown, introduced in 2013 for the Modified and Sportsman divisions. In the Sportsman ranks the fans got to see a variety of drivers like Evoy, Pecore and last year’s champion, Ryan Scott, walk away with the title. But in the Modified portion of the series, it’s Danny O’Brien who has won the series more than any other since the series first began. O’Brien has definitely shown his presence in the series over the years and last season, Danny walked away with his 4th Ogilvie’s Auto Fleet Triple Crown but would later announce his retirement from racing.

Another innovation came to Paul a number of years ago as he and his good friend Henry Boer reminisced about the old days and the “Pabst Shootout” from the 80s. They remembered how successful this race was and the popularity with fans.

Paul explained: “We had discussed bringing a similar type of race to the Bullring for the last couple of years and, so last year, I finally decided to make it a reality.”

So last Fall, during the Loud & Dirty Brand Fall Nationals, Paul incorporated the Bullringer 110 into the schedule. It was originally planned for the Summer but was rained out. So incorporating the race into the Loud & Dirty Brand Fall Nationals was a great move as the race was one of the most exciting events over the entire year where fan go to see Canadian Mat Williamson win the first ever Bullringer 110.

This brings us to this season, which of course is Brockville Speedways 50th anniversary. Paul reminisced: “I have spent so much time here and have so many good memories of being at the track with my dad and, later in life, seeing my boys Rick and Brad driving the pace car at the start of the race, back in the 90s. Brad, at one time, even raced in the Sportsman class and, in 2006, I got to see him win his first Sportsman Modified feature.”

With all of these good memories, I thought it would be great to invite some of the old drivers back to the track over the summer as honorary race marshals for each event. We will also have a special 50-lap race in each class over the summer to honor the fact that this is the 50th year of racing at the Brockville Speedway.”

Its definitely been a great run for the Brockville, Ontario, Speedway and Paul and Cheryl Kirkland have transformed this once fading enterprise into one of the best fan engaged tracks in the Northeast. This year, celebrations get underway on Saturday, May 11, with the 50th Anniversary Opening Night Ogilvie’s Auto & Fleet Triple Crown with two 50-lap feature events for the 1000 Islands RV 358 Modified and DIRTcar Sportsman. Also on the schedule will be the Draper Doors Rookie Sportsman, Street Stocks, and Mini Stocks. The Grand Marshall for the season opener will be the 1968 track champion, Howard Shaw.

For more information and schedule of this year’s 50th season celebrations, please visit the Brockville Speedway’s web site at http://brockvillespeedway.com. Or by email, or phone.
Email: tigger@ripnet.com
Phone: (613) 345-6324