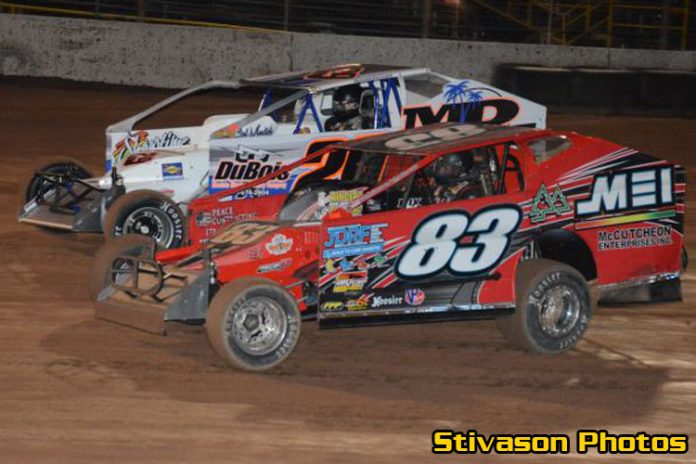 SARVER, PA -A sizzling night on the track helped ward off a rather chilly night at Lernerville Speedway on Friday night. And it was a welcomed sight for all in attendance for what amounted to the 2019 season opener at The Action Track following three consecutive rain outs. When the green flag waved for the first time this season, Brandon Matus found himself in victory lane for the first time since October, 2015.

Meanwhile, Russ King climbed back in the saddle of a Super Late Model at Lernerville for the first time since June, 2017 and was rewarded with a dramatic feature event win. In Big Block Modified Action, Hall of Famer Brian Swartzlander made a statement in a big way as he held off both Rex King Sr and Jr to take his first win of the new year. And in Pro Stock action, Corey McPherson looked to have the field in hand but had to deal with an oncoming Joey Zambotti.

There were no fantastic post-race fence climbs in the cards on Friday night. The winner didn’t feel the need this time. However, Brandon Matus did feel the need to put forth a very impressive effort in the 25 lap Sprint Car feature that saw him emerge as the early race leader and then keep the field behind him in lapped traffic en route to his first feature win at Lernerville in quite some time.

Matus shared the front row with Michael Bauer and from the drop of the green flag, Matus showed speed and determination. Following a pair of early race stoppages, Matus bolted to the lead on a lap three restart like he’d been shot out of a canon while behind him, defending champion AJ Flick, Jack Sodeman Jr., and Sye Lynch started making their presence felt.


Sodeman found himself running second to Matus in the early going as Flick and Lynch made their way around Bauer with Lynch splitting cars with ease in the process to gain forward momentum. Moving forward instantly from his 15th starting spot was hard charger Carl Bowser who managed to make his way to the eighth spot when a caution for a Clay Riney spin on lap nine reset the field with Matus leading Sodeman, Flick, Lynch and Bauer.

When action resumed, Sodeman began taking looks underneath Matus for the lead, but the eventual winner was able to hold on to the top spot as Flick then began to look for a way around Sodeman on the high side. Flick and Sodeman were able to keep Matus in their view, and keeping both of them in their views were Lynch and Bowser. The stage became set for a thrilling second half that would see Sodeman exit the speedway unexpectedly, enabling Flick to inherit the second position. Following a caution with 11 laps down for a Brandon Spithaler spin, Bowser made his way around Lynch and began to hunt Flick and Matus.

The eventual feature winner survived one more restart, before the final green flag run to the checkers, and he made the most of it, getting separation which allowed him to have some distance to spare as lapped traffic became a factor in the waning laps. Matus was able to maneuver where he needed to with ease, as Flick and Bowser kept the leader in their sights but were not able to make a bid for the win.

“It’s been a long time since I’ve stood here and it shows,” Matus said. “I’ve been in a slump for four or five years and it sucks but we got some new cars this winter, I can’t say enough about it. I can’t even say the name of the guy that helped us tonight. I mean people come down from the stands to help and I can’t thank everybody here enough.”

Typically when fans see Michael Norris’s name on the front row of the starting lineup, it generally turns into a victory lane appearance for the back to back track champion. However on this night, a hard charging Russ King drove a patient first half of the race and then became more of a factor as the laps wound down to put himself in position to win in a series of late race restarts.

Norris and Tommy Beck brought the field to the green flag and Norris wasted no time in placing the field behind him. Colton Flinner was able to keep Norris in his sights in the early going until a caution slowed all progress with six laps down for a Mike Miller spin and once again two laps later when Clayton Kennedy and Jayme Beck tangled in turn four. When action resumed, Jared Miley, who had come forward from his seventh starting spot, was able to slide under Flinner for second with Michael Lake and Russ King making bids to hunt the top three cars.

Tyler Dietz brought out the yellow on lap 12, followed by a Tommy Beck spin which set the stage for a thrilling second half showdown. On the ensuing restart, Miley began battling Norris for the lead, taking looks on the outside of the leader while King was taking looks under Lake for the third spot. The two drivers traded slide jobs in clean fashion while Flinner shuffled back to the fifth spot. Meanwhile, out front it was all Norris as he had managed to get some separation from second running Miley.

The shape of the race then changed abruptly when John Wayne Weaver slowed to bring out a caution with the white flag out, setting up the first of three green-white-checkered periods. Miley spun on the first attempt in turn one, taking himself out of contention for the victory while Doug Eck would spin during the second try. On the final restart, King was able to make his way around Norris in turn four and never looked back en route to victory lane.

“I think there’s only one person here that thought he could beat him and it’s a good thing he’s driving this red car right here,” King said. “Mike Norris is a class act. I screwed around there and I was sixth and restarts went my way and I started getting in a rythym because I’m rusty and anybody can go out there balls to the wall in a heat race but it takes rythm when it gets slippery like this. I had em’ pinned down there and it was pretty clean racing for the win but it was complete chaos. My tires were chattering and so was his. It was a long race but at least it paid off for us in the end.”


Swartzlander Holds Off a Pair of Kings

Wins had been harder to come by for DIRTCar and Lernerville Hall of Fame driver Brian Swartzlander over the past two seasons. However, his performance on opening night was as solid a statement as it gets concerning the skill and will of the driver and team. Swartzlander was in mid season form from start to finish en route to victory lane on Friday night and found himself on top of the point standings by the end of the night.

Swartzlander and Bill Barr led the field from the front row with Barr taking an early lead at one point which Swartzlander erased with a lap three pass. Behind them, Rex King Sr. and Rex King Jr. were in position to hunt the leader once they made their way around Barr in the first five laps. Moving forward quickly from his 10th starting spot was Jeremiah Shingledecker who made his way to the fourth spot when a caution reset the field with nine laps in the books. When action resumed, King began taking looks under Swartzlander, but it was as close as he could get the rest of the night.

The yellow flag waved for the final time with 14 laps down when Colton Walters and Tom Glenn got together in turn four and over the course of the final 10 laps, Swartzlander put on a classic performance that showed he still has ice in the veins and a special touch on the right foot. The leader was able to switch grooves at his whim when lapped traffic appeared with King Sr easily within reach and applying pressure. However, the eventual winner kept calm and kept the field behind him as made his way to the checkered flag first. Garrett Krummert earned the hard charger of the race as he was able to make a top five finish happen after starting 15th.

“It feels real good to get a victory right off the bat,” Swartzlander said. “We’ve struggled a bit here the last few years and I feel like we’ve got a couple of pretty good cars this year, better than we’ve had in a while. It doesn’t hurt stating up front either so we’ll take that. I thought I had a pretty good groove, the only thing I was worried about was on the restarts and then we got in lapped traffic and a lot can happen there.” “They’re good,” Swartzander continuted to say regarding Rex King Sr. and Jr. “There’s nights they’re going to beat you and nights that you’re going to beat them, I’m just happy we got through the traffic and got the win.”

it was business as usual for Corey McPherson in Pro Stock action as he let the field know that there had been no letdown during the off season whatsoever by taking home the first trophy of 2019. However, what might have been even more impressive, was the performance from Joey Zambotti that was truly head turning indeed.

Zambotti brought the field to the initial green flag and then seemingly disappeared as his car went off the track following a red flag incident with Scott Byers on the opening lap. Following one more caution at the start of the 20 lap main event, the third starting McPherson and Ryan Moyer put on a battle for the lead in the first half of race while Tyler Dietz ran third, looking to make his move on the leaders.

Meanwhile, Zambotti, who had returned to the tail field following his incident just before the start, had been making his way through the back of the field and had taken the sixth spot before a caution re-stacked the field with nine laps down. Zambotti then went to work on the top five, making it as far as second as he and Dietz traded the position twice in the waning laps. However, out front McPherson was firmly in command though Zambotti would come close to making a challenge for the lead.