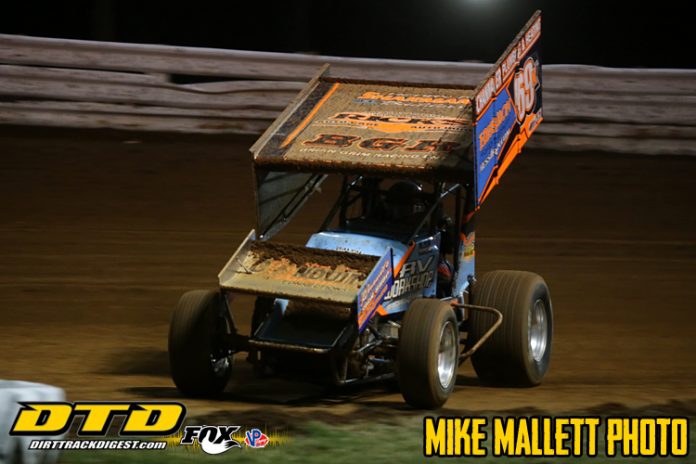 MECHANICSBURG, PA – Lance Dewease assailed the field on Friday night at Williams Grove Speedway to record the World of Outlaws Tune Up event for sprint cars, worth $4,180 to win. It was the first race at the track since late March thanks to continuous rainouts.

The 358 sprints made their season debut at the track on Friday night and Glenndon Forsythe picked up the victory worth $1,500.

A rain delay of more than an hour hampered the event but it also made for scorching speeds as the night wore on.

Dewease started fourth in the 25-lap sprint car field but fell back a spot on the first lap thanks to Robbie Kendall.

Meanwhile polesitter Chad Trout streaked away with the lead over Anthony Macri and Freddie Rahmer.

However Rahmer was racing wounded thanks to a missing inside front wing panel stemming from an opening lap mishap on the initial start that also would end up claiming Danny Dietrich.

The only caution flag of the race unfurled for Dietrich on the third lap thanks to a collapsed front end, likely due to the initial start mishap.

Rahmer began slipping as the laps strung together and Dewease was able to get around him for fourth on the seventh tour before taking third with nine away.

But the pace was quick on the soft, moistened clay and it took all that Dewease had to run down the front duo of Macri and Trout.

But steadily, he honed in on Macri for the second spot and using surges of speed at the end of the backstretch to blast across turns three and four, he overtook Macri with seven to go before going to work on Macri.

Upon taking second spot, Dewease trailed the leader by 1.5 seconds and it would take him another five laps to catch Trout and get command before then pulling out to a 1.2 second victory.

Track conditions forced Dewease to use all the muscle in his car and in the cockpit to get the victory as he stated in victory lane, seemingly worn thin from the grueling speed just endured.

The win was the 94th of his illustrious career at the Williams Grove oval.

Heats went to Dewease and Dietrich with the dash going to Trout.

Forsythe wired the field for the 20-lap win in the 358 sprint feature checkers.

He raced ahead of Matt Findley the entire way but while holding a healthy lead most of the race, his advantage slipped away during the final five laps as his mount struggled to get off of the corners with speed.