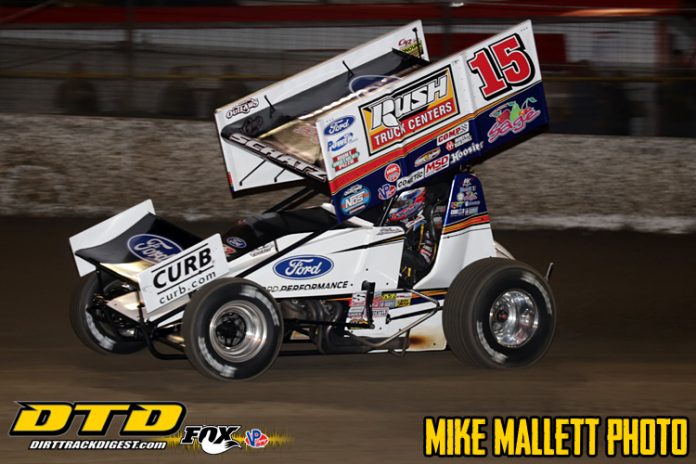 ROSSBURG, OH – Donny Schatz said he has nothing to prove to anyone.

“I’m not done,” a jubilated Schatz said after winning his second race of the season – 285th Series win overall.

Schatz, in his Tony Stewart Racing car, swept the May #LetsRaceTwo doubleheader at Eldora Speedway last year, which at that time was his seventh and eighth wins of the year. However, Schatz has a new crew chief this year – after his former Crew Chief Ricky Warner, who he spent most of his career with, went to work for Ford.

The 10-time Series champion doesn’t point any fingers at the crew chief change for the lack of comparison to last year’s performance. There’s a multitude of changes to take into consideration.

“We’ve got a pretty good play book we’ve had over the years, but things change,” Schatz said. “Tires change. Cars change. The ways guys race change, so you’ve got to stay on the front side of it. That’s what we’ve been working on the past couple of months. I feel like we’ve figured out what we need to do to get things right for us. I’m happy about that and hopefully we can keep that to ourselves and not have to race against it.”

Friday night’s win won’t define the rest of his season, though.

“You can’t gauge anything off of one race,” Schatz said. “It’s just the way racing is. You make changes and you have to battle through it. If this was easy everybody would do it. Look at the stats over the past 10 or 12 years. You’ll see what the stats say.”

The stats of night one of #LetsRaceTwo at Eldora Speedway show Schatz dominated the Feature, leading every lap from the pole, but Logan Schuchart and rookie Carson Macedo didn’t let Schatz cruise to an easy win.

When the green flag flew, Schatz launched to the lead, with Macedo close behind. While Schatz rode the inside line, Macedo threw his car to the high side. The rookie, in his Kyle Larson Racing car, charged on the outside like a starving predator in pursuit of an innocent prey.

By the time the two reached turn one for the second time, Macedo had already hurled his car underneath Schatz and cleared him by the apex. However, his momentum drew him back to the wall, allowing Schatz to ease underneath him and reclaim the lead.

“I thought when I was throwing stuff at him (Schatz) at the beginning, and I was kind of able to maintain after that, I thought maybe if we get to traffic, maybe I could make a move,” said Macedo, who settled for third. “But Donny is just exceptional. I didn’t pull the trigger when I probably should have. Just my fault. Something I need to work on as a driver. To win these World of Outlaws races, you just can’t do that.”

After Macedo’s attempt to steal the champion’s lead, Schatz set sail showing his expertise on the track he’s won at more than 10 times. No matter if he had to go high or go low, Schatz could put his car wherever he needed to navigating lap traffic.

Slower cars would block his chosen lane at times, killing his momentum. That allowed the hard charging Schuchart to further close on Schatz every lap. Schuchart, who finished second to Schatz during both nights of last year’s #LetsRaceTwo doubleheader, was determined to finish one spot better this year.

With about four laps to go, Schuchart close to a car length behind Schatz. The Shark Racing No. 1a was in sight for its third win of the season. But like Schatz, a lap car killed Schuchart’s momentum and ended his chance for a second win at the speedway.

“I was following a car on the top and he hit the wall and I had to check up pretty good there,” said runner-up Schuchart. “All and all I thought it was a good race. I think we actually fell to sixth at the beginning and had to work our way back up there. I think we had the car to beat and the fastest race car. I hope we can come back tomorrow and get another shot at it.”

While Schatz had command of the race all night, there was still a lot going through his head on what he needed to do and look out for to secure the victory.

“Over the course of the run, you start to lose a little bit and lose a little bit,” Schatz said. “And you use your tires. This place is always a question on fuel. You’ve got to be cautious on the gas, too, for being able to make the distance. We didn’t have any yellows, thank goodness. That’s another thing you have to take into play. You think about those things when you’re leading.”

He added the hardest thing to do is lead a race, and he hasn’t done a lot of that this year — just 14 laps before Friday night’s race.

He’s still having fun, though.

“I’ve won every race I’ve wanted to win,” said Schatz, who now leads the Series standings by 14 points over Brad Sweet. “Everything from here is gravy. I’m racing the way I want. I’m racing with the people I want, and we’re having a good time.

“The funny thing about the sport is, if you can have a fun time when you’re not winning, when you are winning it’s going to be really good. That’s where we’re at.”

He has nothing left to prove. But that won’t stop him from continuing to be a dominate threat.

UP NEXT:
The Greatest Show on Dirt will make its next stop Saturday, May 11, at Eldora Speedway in Rossburg, Ohio for the final night of #LetsRaceTwo.