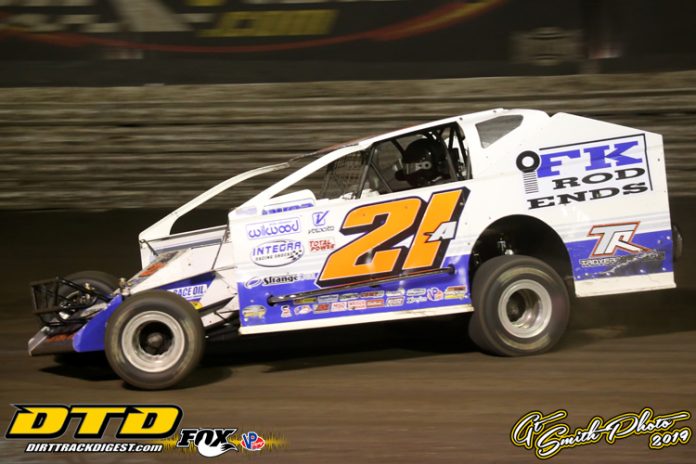 MALTA, NY – Now, that was worth the wait.

Britten won the first heat, putting him on the pole for the feature, and led all but one lap of the feature.

But this feature was anything but boring.

In the early stages of the race, Keith Flach got wound up on the outside groove, and charged past Britten to get the lead on lap three. But just one lap later, Britten regained the momentum on the bottom, and was back in front.

The leaders got into lapped traffic after just 10 laps, and Britten avoided disaster on lap 11 when he made contact with the lapped car of Brian Berger coming out of the fourth turn and brushed the outside wall.

Then, Flach made another charge. On lap 18, Britten and Flach were running side-by -side as they battled for the lead, but Flach had his momentum broken by the lapped car of Rich Ronca, and Britten dodged another bullet.

But it wasn’t over yet. While Britten and Flach were dealing with lapped traffic, Anthony Perrego found something on the top side, and quickly closed the gap on the top two. Perrego, who was at Albany-Saratoga on Friday as a tune-up for Tuesday night’s $5,400-to-win “Come ‘N Get It” modified shootout, which was rained out last month, moved past Flach to take over second on lap 32 and then tried to make a slingshot move off the third turn on the final lap, but Britten held his line and came away with his ninth career win at Albany-Saratoga Speedway.

“I always have a terrible draw for races like this, but tonight, I had a good draw, won my heat race and started up front, and that made it easier,” said Britten. “I knew with all the lapped traffic that someone would be close to me, but I’ll tell you, it’s good to be back in Malta.”

Flach admitted that he was fast early in the race, but “… then the top got real dusty, and I didn’t think I would get by Peter if I stayed up there.”

“I figured the top would go away,” said Britten. “But when Keith rolled up on me, I got up on the wheel a little more.”

Connor Cleveland came from his 12th starting position to win the 25-lap sportsman feature. Brian Calabrese led the first 10 laps, but a couple of restarts allowed Cleveland to close in on the leader, and he dove low in the first turn on lap 13 to take the lead away from Calabrese.

“In the beginning, I realized we made two wrong changes,” said Cleveland after the race. “The changes made me way too tight on top, but once I got to the bottom, the car was a rocket.”

Josh Coonradt, who said during the winter that he was setting his sights on the pro stock championship at Albany-Saratoga, got off to a good start by winning the opening-night feature on Friday.

Coonradt started third in the 25-lap feature and rocketed into the lead after just one lap, but the top group of Coonradt, Chuck Dumblewski, Kim Duell and Brandon Emigh put on an entertaining show. Dumblewski and Duell swapped the No. 2 spot on a couple of occasions, until Emigh made his run, took over second on a restart, and then moved by Coonradt for the lead on lap 12.

But three laps later, Coonradt was back out front, and that’s where he stayed. Emigh finished second, with Dumblewski third, Dan Older fourth and Duell fifth.

Dylan Bokus was first under the checkered flag in the 20-lap Haun Welding limited sportsman feature. After an early yellow, Bokus went around both Shane Larman and Josh Rozzelle to go from third to first on lap five. He then held off Dave Richer to get the win.

Albany-Saratoga Speedway will be back in action Tuesday night with the rain-delayed “Come ‘N Get It” program. Racing will begin at 7 p.m.