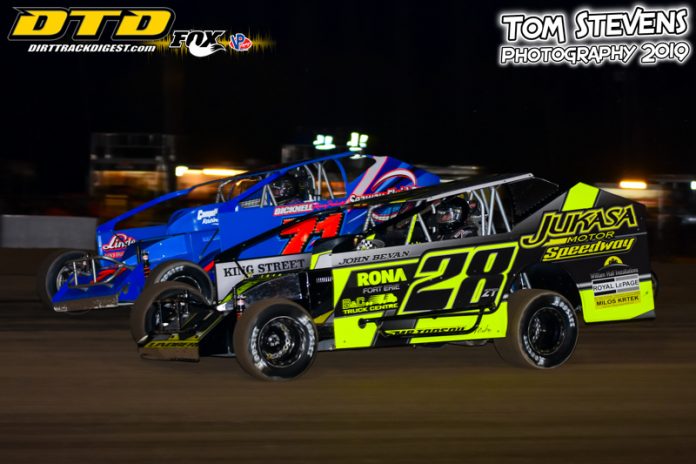 After a $444.00-to-win Pole Dash Challenge to set the top 12 starters, it was Gary Lindberg and Fred Carleton who brought the S&W Service Centre 358 Modifieds to the green flag in the Brian Stevens Memorial with Lindberg taking the lead. The red flag will fly as Carleton slowed on the top of turn two as Bill Podwinski and Dalton Slack had nowhere to go and made contact. On the restart, Lindberg would pull away from the field as Mike Bowman, Tim Jones, Pete Bicknell, and Mat Williamson moved up through the field. Mike Bowman would pass Todd Gordon to take over second on lap 10 and would start to go after Lindberg, whose lead was a full-straightaway by lap 12. After a mid-race restart bunched the field up, Lindberg and Bowman would start to pull away from the field. Lindberg would run away from the field as Bowman was being pressured by Tim Jones and Ryan Susice. Lindberg would pull away from the field and would go on to score the win. Mat Williamson would drive back through the field to finish in second and was followed by Bowman, Susice, and Jones.

The Hoosier Stocks were brought to the green flag by Bryce Richardson and Dave Bailey and it was Bailey getting into the early race lead. Rob Murray would move into second place early on and would start to reel in Bailey, who opened his lead over the rest of the field. Rob Murray would take the lead away on lap 11 from Bailey after going to the inside off turns three and four. Murray would pull away from Bailey as the leaders hit lap traffic. The caution would come out with two laps remaining as Todd Shaw spun in turn four. Murray would drive away on the restart to earn his first win of the season.

Jeremy Cooper used his outside front row starting spot to take over the lead in home race #1 for the Insta Panels Duel on the Dirt, and the first race of the TMR Racing Triple Crown for the Central Fabricating 4 Cylinders. Kyle Rothwell moved into second on lap three and would go after race leader Cooper. After a lap eight restart, Rothwell would take the lead away as Tyler Lafantaisie would move into third place. Rothwell would pull away from the field to score the win.

Jeffery May and Rob Misener would share the front row for the Doidge Building Centre’s Mod Lites feature event. Sean “Cheeseburger” Iftody would take over second and would reel in the race leader May. Off a lap five restart, Josh Sliter would take second away and would use the outside groove to pass May to take over the lead. From there, Sliter would pull away to earn the victory.

Dave Hahl led from the drop of the green flag in the feature event for the Dave’s Auto and Speed Centre V6’s. John Couture would take the lead away at the end of the opening lap. Couture would lead all 12 laps to earn his first feature win of the season. Last week’s feature winner Kevin Conley finished in second with JJ MacDonald, Colton Lane, and Chris Mussat completing the top five.

NEWS AND NOTES: Race fans were able to see the future stars of Merrittville in action on the track during the go-kart exhibition and display on the midway. 110 cars signed in pitside for week two of the 2019 season. The Pole-Dash Challenge for the Modifieds saw the top 12 starters in a grudge match with the lone survivor earning the pole and an extra $444.00. The winner of the Pole-Dash Challenge was Gary Lindberg.

Two big nights of racing are planned for Victoria Day Weekend at Merrittville. Next Saturday, will be the Bike Giveaway with over 70 bikes being given away. The Pen Centre will present the racing program that will also see the first Tim Hortons Enduro Qualifier of the season accelerated by JC Auto. Pit gates will open at 5 pm with grandstand gates opening at 5:30 pm and the first green flag of the season will fall at 7 pm. Victoria Day Monday, the UMP Modifieds featuring Ken Schrader will be on hand sponsored by Zavitz Financial Strategies and ZFS Benefit Solutions. The Action Sprint Tour will make their first stop of the season plus Sportsman, Hoosier Stocks, V6’s and a School Bus Race. Pit gates will open at 4, with grandstands at 5:30 and race time is scheduled for 7 pm on Monday, May 20.