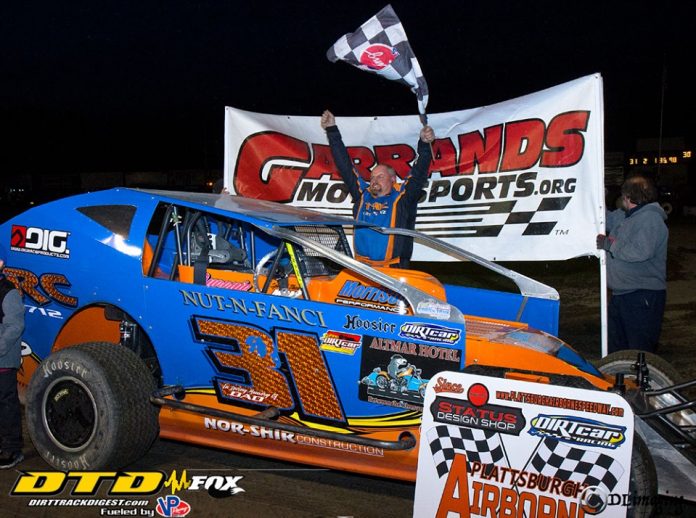 PLATTSBURGH, NY – Lance Willix has always been comfortable on a dry-slick race track. That showed Saturday.

Willix, a native of Theresa, NY took the lead for good on lap-17 of the 30 lap Egglefield Ford 358-Modified feature at Plattsburgh Airborne Speedway.

“I prefer the dry-slick conditions on the track,”Willix said. “I’m really happy and were on the road to Utica-Rome on Sunday.”

Greg Atkins led the field for the first 16 laps of the event that went caution free. Jack Lehner worked a smooth line around the track and made a late pass to take the second spot. Atkins would hang on for third, while Mike Mahaney and Dany Gagné completed the top five.

Rivers took the lead on lap-25 while working the bottom of track. In the final laps, Rivers would pull away to a comfortable victory of Adam Pierson, Jack Speshock, Travis Bruno and Moïse Pagé.

Racing action resumes next Saturday for Kid’s Night with a 6 p.m. post time. Kids race car rides will begin at 5:30.