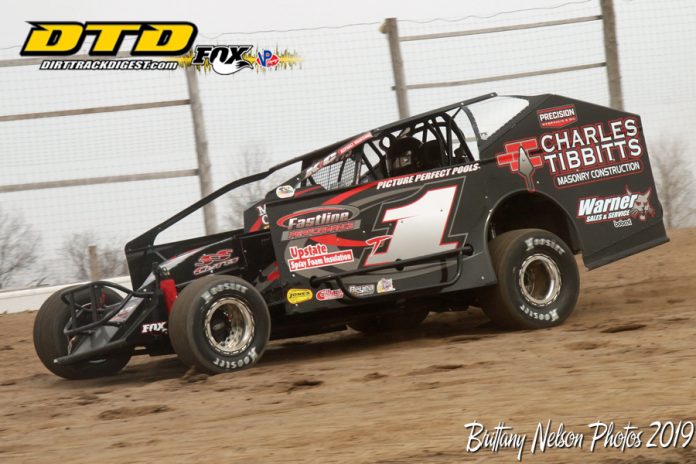 VERNON, NY – The 2019 season is off to a wet start at the Utica-Rome Speedway, but track officials are hoping to break the bad weather luck this Wednesday night.

With so many rainouts to start the season, speedway promoters Bill and Kim Shea have added Wednesday night, May 15 to the schedule to serve as the season opener for the 2019 racing season.  To show appreciation to our fans  admission for Wednesday’s show is just $10 while kids 16 and under remain free.

The program, sponsored by VP Racing Fuels, features the DirtTrackDigest.com DIRTcar 358-Modifieds, the Broedel Fuel Group DIRTcar Sportsman, the Ted’s Body Shop DIRTcar Pro Stocks and the newly named Bernie’s Extreme Performance Parts Rookie Sportsman.  This event serves as the opening round for the chase for the 2019 season championship and drivers will also gain points toward the Hoosier Racing Tire Weekly Championship.

Mother Nature and recent sponsor additions have also forced the track to make additional changes to the 2019 schedule.  The VP Racing Fuels Summer Shootout Series for the DIRTcar Sportsman is now slated to take the speedway on Sunday, May 26 along with a full program for weekly divisions and the first stop by the Lucas Oil Empire Super Sprints.

Due to all the wet weather and the addition of Bernie’s Extreme Performance Parts as the Rookie Sportsman division sponsor they are now slated to compete each Sunday night for the remainder of the 2019 racing season.

Pit gates on Wednesday will open at 4:30 pm while spectator gates swing open at 5:30 pm with the heat races beginning promptly at 7 pm for opening night on Wednesday. Adult general admission for the opener is set for just $10 while kids 16 and under are free. Pit admission for the night is $27 for DIRTcar members and $30 for non-members.