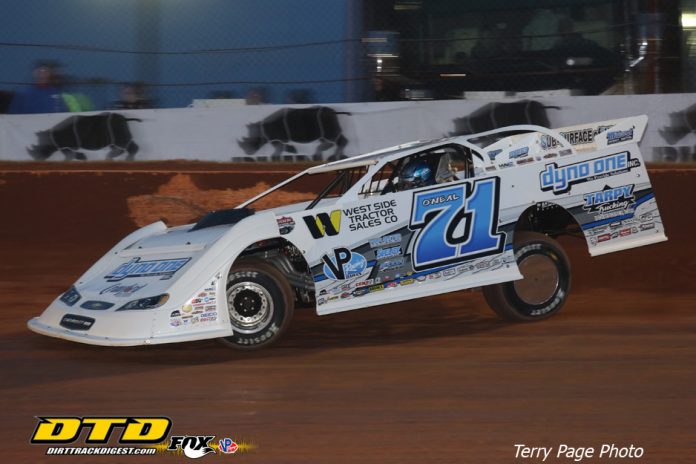 WEST BURLINGTON, IA – Hudson O’Neal passed Jonathan Davenport on lap 48 and went on to score his second win of the season on Thursday night at 34 Raceway.

O’Neal battled with his father Don for several laps after the 18-year-old charged from the 10th starting position. Then, a single file restart with three laps to go saw O’Neal pass Davenport to score a one-two finish for Longhorn Chassis.

Don O’Neal took the lead heading the down the backstretch on lap 38, but that lap was never completed as contact between Don O’Neal and Davenport caused the caution flag when O’Neal came to a halt with a left rear flat.

“Oh my gosh I am out of breath,” said the winner in Lucas Oil Victory Lane. “The surface was bumpy, but it made for some good racing. I was all over this thing. It really widened out there at the end and it gave me a chance to make a move there on JD. We weren’t very good at the beginning, but we continually got better and better. I just put myself in a good position there at the end.”

“I hate what happened to my dad,” Hudson added. “We were battling hard. I thought for a moment I had a right rear flat under that one caution because it was lying low really bad. It scared me for a little bit. This car was on a rail tonight. We made the right adjustments to get it to the front. It’s good to be back in Victory Lane after not being very good for a couple of months.”

Davenport congratulated the young O’Neal in Victory Lane. “It was a heck of battle with the O’Neal’s and inside my own racecar. I am sure it was a heck of a show for the fans. I didn’t know where I was going there sometimes. I want to tell Don [O’Neal] I am sorry. You can’t see out of these things. As soon as he slid me, I ran over his left rear and I tried to get off of him.”

Richards’ in theClint Bowyer Racing No. 14 battled with his teammate Don O’Neal before settling for a third-place finish. “We had a good car early and we drove our way up to third after starting seventh. I had a good there with Don. I kept bottoming out on the restarts. We were way too tight for the conditions, but it was a lot of fun out there tonight. The crew has been working hard, and I thought we might be able to get both Bowyer cars in the top three, but we will take it and head the next one.”

The winner’s Todd and Vickie Burns-owned, Longhorn Chassis is powered by a Clements Racing Engine and sponsored by: Dyno One, West Side Tractor Sales Company, Sub-Surface of Indiana, Tarpy Trucking, VP Fuels, and Crawford Outdoor. 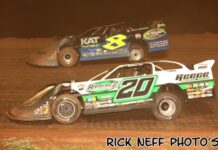