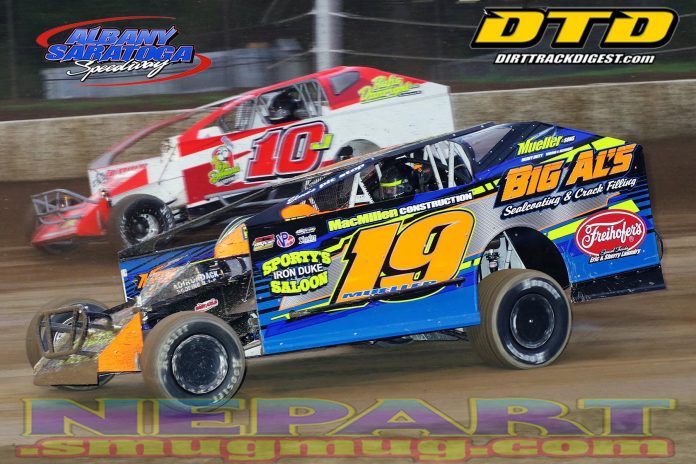 Then, he got a big break.

And as a result, he walked off with $3,000 for picking up his first win of the season Friday night in the 35-lap modified feature at Albany-Saratoga Speedway.

Mueller took advantage of a late restart to overhaul race leader Mike Mahaney and then rode the cushion the rest of the way to deny Mahaney his first career win at Albany-Saratoga.

Mahaney, driving the George Huttig-owned Adirondack Auto-sponsored No. 35 that Mike Perrotte piloted for years at Albany-Saratoga, had to settle for second, while 13-time track champion Ken Tremont Jr. crossed the finish line third.

Mahaney, who started fifth in the field, only needed three laps to get to the front while Mueller, who started seventh, was hooked up in a side-by-side battle for second with Neil Stratton.

Stratton opened up a little breathing room, while Mueller then got into a battle for third Bobby Hackel IV. Hackel took over the No. 3 spot coming out of the fourth turn on lap 13, but just as quickly, Tremont joined the lead group and used a restart on lap 17 to take third away from Hackel, dropping Mueller to fifth.

Mueller kept working the top and got back into the No. 3 position on lap 20, and with 10 to go, Stratton was drawing in on Mahaney, who was missing a great show behind him.

Then things got a little crazy.

Keith Flach spun around in the second turn on lap 28 to bring out the yellow, and on the restart, Mueller had to check up and break his momentum when he made contact with Mahaney. As that point, he said later, “I was ready to settle for third.”

That little mishap allowed Rocky Warner to put the Jake Spraker IJ into third place, but on lap 30, Warner and Stratton came together in the second turn, with each car spinning out, bringing out another yellow.

That put Mueller back into second, and he rocketed off the top to get the lead on lap 31.

Using that heavy right foot he’s known for, Mueller opened up a two-car length lead on Mahaney and had a two-second margin of victory when the checkered flag flew.

“The car was awesome,” said Mueller after the win. “I have to thank the guys at DKM for hooking me up with a fast hot rod.

“When Rocky and Neil for together, I just took advantage of it,” he added. “I knew I had a chance. I had to calm down, hit my marks and not jump the cushion.”

And if you thought the finish of the modified feature was close, you should have seen the 25-lap sportsman feature.

Chris Johnson set the pace for a good portion of the feature, but when Johnson got into traffic late in the race, defending track champion Tim Hartman Jr. made his move.

Hartman started to hound the leader, and going into the third turn on the final lap, Hartman elbowed his way through a small hole, making contact with the lapped car of John Miller, but that allowed him to come out of the fourth turn side-by-side with Johnson. The two leaders banged together, but kept their cars under control, and Johnson hit the finish line one-tenth of a second before Hartman, with Andrew Buff a very close third.

The pro stocks actually started the night of exciting finishes, with Brandon Emigh getting the win by a nose over Jason Corbin, who was another nose ahead of third-place finisher Josh Coonradt in the 25-lap feature.

Corbin took the lead following a restart on lap nine and had Coonradt on his tail once Coonradt moved into second on lap 20.

But while Coonradt was banging on Corbin’s rear bumper, trying to get him off his line, the bottom opened up for Emigh and he ducked under the leaders to get the lead, setting the stage for the photo finish.

“I just had to keep working the bottom in one and two,” said Emigh after his ninth career win. “I knew if Coonradt got to the bottom, I probably wasn’t going to win.”

Bryan Jones Jr. of Clifton Park did a masterful job to record his first career win in the 20-lap Haun Welding limited sportsman feature. Jones started 25th in the 30-car field, but used his patience and took advantage of a number of early restarts to move up in the field. He finally took the lead with two laps to go and pulled away from Mike Furmont to get the win.

Defending track champion Randy Miller won the 15-lap Lake Auto Parts street stock feature, squeezing between Pete Vila and Al Relyea to go from fourth to second on lap seven, and then getting the lead got good two laps later. The victory was the 45th of Miller’s career at Albany-Saratoga Speedway.

The Mohawk Valley Vintage Dirt Modifieds were also at the historic Malta track Friday night. Former Lebanon Valley track champion John Flach Jr., driving a replica of his own No. 77, scored a popular victory on his birthday in the feature.