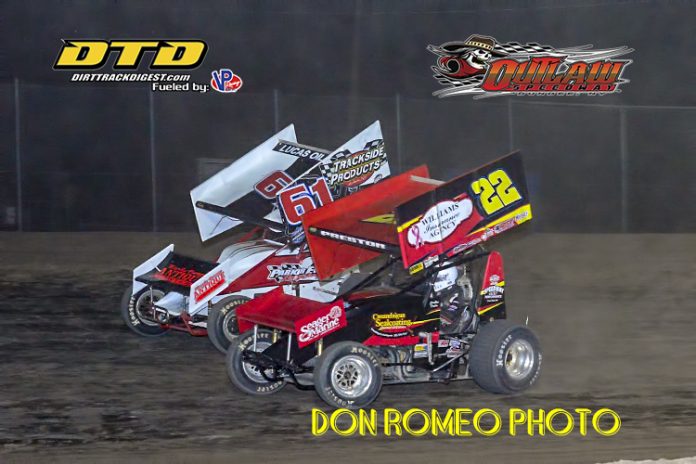 DUNDEE, NY – Jonathan Preston finally cracked into the record books on Friday night at the Outlaw Speedway with the Lucas Oil Empire Super Sprints. The Romulus, N.Y., has been so close so many times to getting his first win only to come up short.

Early in the feature Friday night it looked like Preston was going to dominate the race. Then it looked like a late mistake was going to cost him the opportunity for a win. Luckily Preston got a well-timed caution that eventually allowed him to go on and score the $2,610 victory in the NAPA Auto Parts / Mach 1 Chassis 25-lap feature.

Preston started the night by setting fast time in his group before dominating his heat race. From there he redrew the second position for the start of the A-Main. By completing the sweep of fast time, heat win and A-Main win he won the $500 Wick-edly Sent Triple Crown.

“I finally got the monkey off my back,” commented Preston after the win. “I think it was an omen. Someone was looking down from up above because I got fast time, redrew two and redrew two again for the feature. Two and two…it was my night.”

That outside front row starting spot helped propel him to the lead at the green flag. Preston went high into the first turn securing the number one spot from pole-sitter Paulie Colagiovanni.

Preston set a quick pace in the early go catching the rear of the field prior to lap five. Before he got into the heavier traffic, Steve Poirier spun off the speedway just into the infield with a collapsed front end. That ended the night for the defending series champion.

Preston chose the outside lane for the next restart which proved to be the right choice as he again kept Colagiovanni in check to keep the lead. As the laps clicked off, the gap over the field expanded while Colagiovanni had a host of competitors looking to take the second spot from him including Jason Barney and Davie Franek.

By the time the race reached the mid-point Preston was mired in traffic, but he held a comfortable margin over the rest of the field. He kept his No. 22 predominately on the top of the speedway to keep up momentum allowing him to slice his way quickly through traffic.

“There was a nice cushion up on the top,” said Preston. “I don’t think there was much on the bottom.”

On lap 19 Mark Smith spun off the high-side of turn two forcing the second caution of the race. Like the previous restart, Preston elected to go to the outside groove for the green. This decision appeared to prove costly as Colagiovanni got the jump on him. He slid up in front of Preston in turns one and two to take the lead away.

As the field came to the line to complete lap 20 a caution was necessary for a spinning Jason Barney. As the field slowed up Josh Azzi flipped heading into turn one necessitating the red flag. He was unharmed in the crash.

This caution was good news for Preston as he inherited the lead back for a single-file restart. It took two more attempts before lap 20 could be scored, but it was all Preston. Preston drove away over the final six laps of the feature to earn his first ever series win.

“Last year Chuck (Hebing) got me here,” cited Preston. “I gave him the top after going to the bottom. I tried guarding the bottom. I knew I wasn’t going to do that again, but in hindsight that was probably the right thing to do to go to the bottom so he couldn’t slide me.”

As happy as Preston was to see the caution, Colagiovanni was as equally disappointed that he lost the lead due to the yellow. He inevitably was forced to settle for a second place effort.

“Things didn’t go my way tonight, but the car was good,” stated Colagiovanni. “I’m pretty happy with the performance tonight. My dad and Doug (Emery) set up the car really good so I could move all over the track. I tried the bottom a couple times but I think the top was just too fast with the momentum. We’ll get it next time.”

Franek completed the podium, and like Colagiovanni, the caution hurt him as he had actually moved up to the second spot before having the field reset.

“I hate finishing third,” joked Franek. “It was a good run for us to come up here. I didn’t need that yellow when I got to second but that is the way the cards fall. If it was another way it could have been me falling back. We’re happy.”

Paul Kinney advanced from the seventh starting position to finish in fourth while Matt Tanner was able to complete the top five. The next five was made up of Chuck Hebing, Barney, Brett Wright, Smith and Shawn Donath.