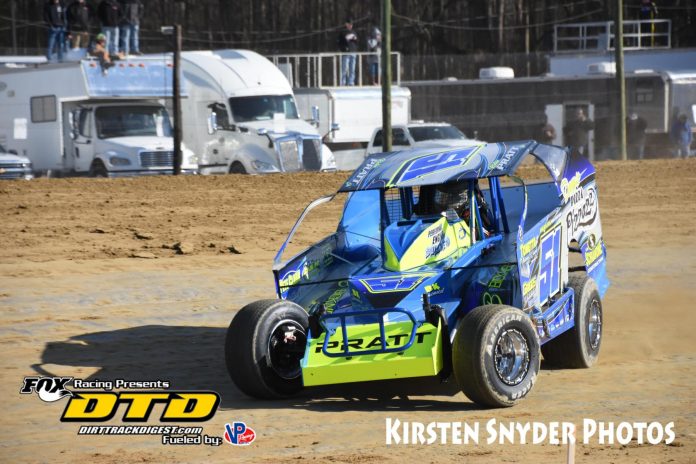 GEORGETOWN, DE – It had been since 2015 since Richie Pratt Jr. won at Georgetown Speedway.

Pratt Jr. started the 30-lap feature on the pole alongside a former driver of the No. 51 ride: Billy Pauch Jr. For the Deron Rust Memorial, Pauch Jr. was aboard the Rick Holsten No. 96 machine as he and Pratt Jr. led the field to green.

In the early going, the top two were the story, appeared to be fighting a bit of a push on corner entry. Pauch Jr. could only pressure Pratt, but not overtake him.

After a pair of early skirmishes, Middletown, N.Y.’s Anthony Perrego had piloted the Gary Simpson No. 12K into the top-four. Perrego found the outside lane of the semi-banked oval to his liking and swept past both Pauch Jr. and Ryan Watt to take over the runner-up spot.

For the race’s final 10 laps, Perrego stalked Pratt – both following in the leader’s tire tracks and darting to the inside – waiting for a miscue. On the final circuit, Pratt checked up approaching a lapped car into turn three.

Perrego shot the gap to the inside, drawing the large crowd to its feet. Pratt’s outside momentum allowed him to maintain the edge and bested Perrego under the Sunoco Race Fuels checkered flags.

“We needed this,” emphasized Pratt following the victory. “I knew the 12 (Perrego) was right there. Any mistake and he was right on me.”

Perrego made his long drive from the Empire State worthwhile with a $2,000 runner-up finish. Boyertown, Pa.’s Watt finished third in the Ron Roberts No. 14W, followed by Pauch Jr., who got crossed up in turn three momentarily in the final laps, and Craig Von Dohren of Oley, Pa., climbing forward from the sixth row.

Placing sixth through 10th, respectively, were Milford, Del.’s Jordan Watson, who earned $250 as the top First State driver from Ad-Art Sign Company; 14th-starter Jeff Strunk of Boyertown, Pa., who at one time had reached the top five in the Glenn Hyneman No. 126; Oley, Pa.’s Duane Howard; and a pair of Garden State drivers in Ryan Krachun and Matt Stangle.

Stangle received $250 from Kruger Trailers as the race’s Hard Charger.

Joe Toth was a breakthrough winner in the Chesapeake Paving/J.W. Brown Trucking 20 lap Crate 602 Sportsman feature. It was Toth’s first-ever win at Georgetown and he received a hefty $1,396 for his efforts.

Newtown, Pa.’s Toth weathered every restart and challenge from second place runner Matt Peck to grab the win. Peck would ride the outside for the entirety of the 20-lap affair to hold on to the runner-up spot.

Jordan Long grabbed a third-place finish and the $100 Preferred Power Washing Top Delaware driver bonus. Scott Hitchens came from 13th to fourth after struggling in his heat race and Super Late Model star Mark Pettyjohn jumped behind the wheel of Gary Simpson’s 602 Crate ride and brought it home with a top-five finish.

Robert Smith and Matt Esham traded the lead a couple of times in the Delaware Super Truck 12-lap main. Ultimately, it would be Smith to pick up the win by two car lengths over Esham. Dale Elliott, Ryan Efford, and Jerry Hill rounded out the top five.

DERON RUST MEMORIAL NOTES: Tammy Rust, widow of the late Deron and a key employee of the speedway, gave an emotional speech during the pre-race drivers’ meeting recalling her husband’s love for the speedway….

The VAULT Classic Rock broadcast from the speedway for two hours prior to race time. RC2U provided R/C car action for the kids in attendance….

Track conditions were wide and tacky throughout the program with no track prep required during the event….