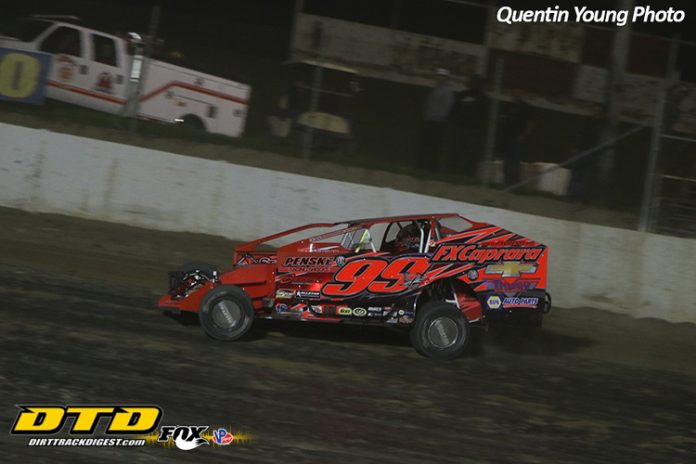 FULTON, NY – Larry Wight scored a Fulton Speedway hat trick, charging from 18th to his third win in a row to remain undefeated at the track in 2019.

Joe Shields led the 27-car field to the green flag, setting the pace early in the 35-lap main. Shields dropped low on the speedway, and Tom Sears Jr. blasted around the top and into the lead on lap 5. Greg Martin followed Sears’ line and grabbed second a few laps later, but Sears was long gone out front. By lap 10, Sears had gapped the field by an entire straightaway.

At the back of the top five, a heck of a battle between Tim Sears Jr., Bobby Herrington, and Larry Wight was raging on. On lap 13, the trio all made some slight contact, which sent Tim Sears for a lazy spin down the frontstretch. This wiped out uncle Tom Sears’ five second lead, bringing Martin and company right to his rear bumper.

Sears was able to slip away on the restart, opening up a small lead as Martin and Jeff McGinnis swapped spots. While Martin and McGinnis battled, Wight took advantage and drove under both and into second on lap 16. Tom Sears was riding the extremely high cushion all around the racetrack, while Wight took a different lane at each end of the track. Wight kept even through turns three and four, mirroring Sears’ high groove, but made up wholesale ground every lap running the bottom in one and two. After a handful of laps of stalking Sears, Wight pulled out in front with a big launch off the bottom of turn 2 on lap 20.

With ten to go, Wight had grown his lead to a few seconds over Sears, and kept extending it through heavy traffic. A lap 29 yellow allowed the field one last shot at Wight, but nobody could keep pace in the final circuits. After 35 laps, it was Larry Wight crossing the stripe first, followed by Tom Sears Jr., Jeff McGinnis, Bobby Herrington, and Pat Ward.

“I needed to wait for everyone to level out and kinda find their line,” Wight said. “It took a couple laps for our tires to come in. Once we got rolling and I could see where everyone was running, I could make some moves.”

Chad Homan scored the win in the Late Model main, with a late race fourth-to-first charge culminating in a last lap pass on Bret Belden. 67 Sportsman signed in for action, with Dorian Wahdan, Tony Finch, and Dylan Zacharias all skating to wins on the slick track in their respective features.

Scott Jeffery’s Performance Plus May 18 Results